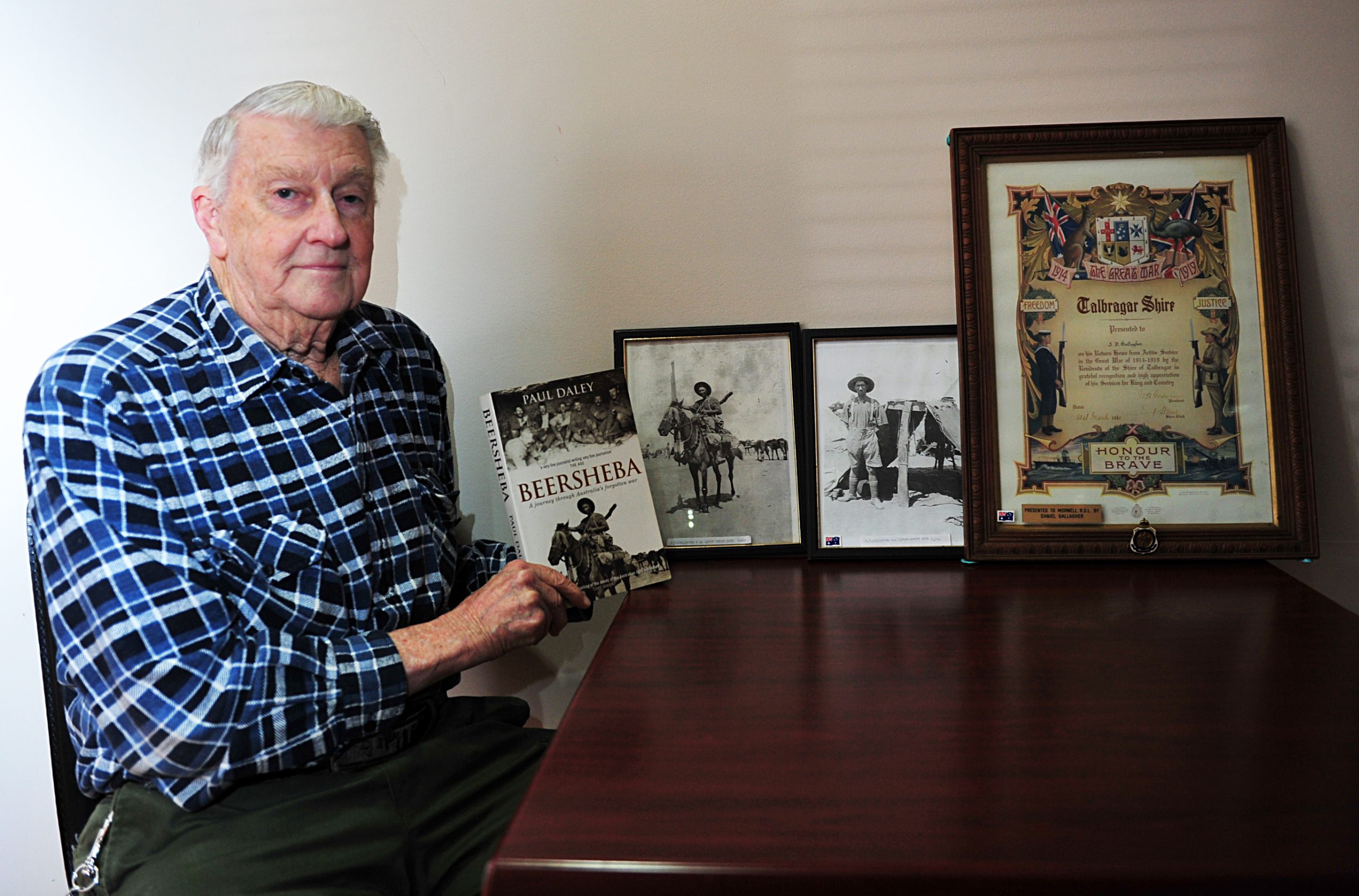 LONG-TERM member of the Morwell RSL, Danny Gallagher knew little of his father’s time in the First Light Horse Regiment until after his death.

James Daniel Gallagher never spoke of his service as a trooper in the first mounted formation committed by Australia to the First World War.

But the discovery of a 16-page letter Mr Gallagher wrote to his friend, a ‘Mr Fallick’ in February 1916, revealed a world of simple two-by-four tents, camel convoys through the Egyptian desert, a Jewish village in Palestine, the constant search for water and the famous Battle of Beersheba.

Mr Gallagher said unfortunately Mr Fallick, a fellow serviceman, was shot and died the day his father intended to post the letter.

“He never spoke to any of us about the war. Dad died in 1965, we found the letter and sent it to Melbourne University to have it authenticated,” Mr Gallagher said.

In recognition of World War I, which broke out 100 years ago this week, and the 60,000 Australians who died in the war that claimed more than 16 million lives worldwide, Mr Gallagher has shared excerpts of the letter with The Express.

“A troop was detailed off as a pumping party for the Brigade, we saddled up about 11am and rose to the wells, it proved to be a very strenuous task, the water had to be lifted from some considerable depth, about 5 o’clock our task completed we saddled up again and prepared to join up the bridge, which would pass by en route for Beersheba,” the letter stated.

“We sat on our horses until 7.30 watching for our brigade to come along, also what I thought a grand sight, the full division (Anzac) in Column of Route our brigade was the rear brigade hence the wait, and talk about dust it was only a rumour, we travelled all night and took our position north east of Beersheba the New Zealanders and second brigade being on our right and the Australian division on our left.

“About 9 o’clock a few shells greeted us, but it wasn’t many minutes before our guns (18 pounders) began to answer them, the artillery kept a continual shower of shrapnel around their redoubts until about two o’clock when the 2nd and 3rd regiments advanced and captured a redoubt on the right and forced several Turks with machine guns to retreat from three huts immediately in front of us. Both regiments had a good many casualties.”

In his letter, Mr Gallagher described the capture of Beersheeba as a “beautiful sight”.

“On the one side were our troops advancing some four or five lines of men deep on foot, also the fourth brigade galloping in, in the town itself explosion after explosion was taking place the Turks having well mined it before leaving and on the far side was the retreating Army.

“On the 31st Saube flew over and bombed part of our transport, casualties were seven men out of eleven and seventeen horses out of twenty one. These bombs dropped from aeroplanes are feared more by the men than any other weapon.

“We returned to Beersheba that night and remained there until the night of the 6th. In that stunt our horses were without water from the evening of the 2nd until the morning of the 4th you can imagine how they rushed in when it appeared in front of them. Nothing of note took place till the evening of the 6th with the exception of the burying of the poor chaps who met the death they were buried in a very suitable place, the Beersheba Cemetery is in the midst of a very fine lot of young gum trees.

“I would very much like to get back to Beersheba some day and get a photo of the graves and graveyard.”

Mr Gallagher hopes to share an audio recording of his father’s letter, read by Nathalia RSL president John Davis as part of Anzac Day celebrations in 2015.

His father’s story is also told in journalist Paul Daley’s book, ‘Beersheba: A journey through Australia’s forgotten war’ and portrayed by actor Chips Rafferty as ‘Jim’ in the 1941 film, ‘40,000 Horsemen’.