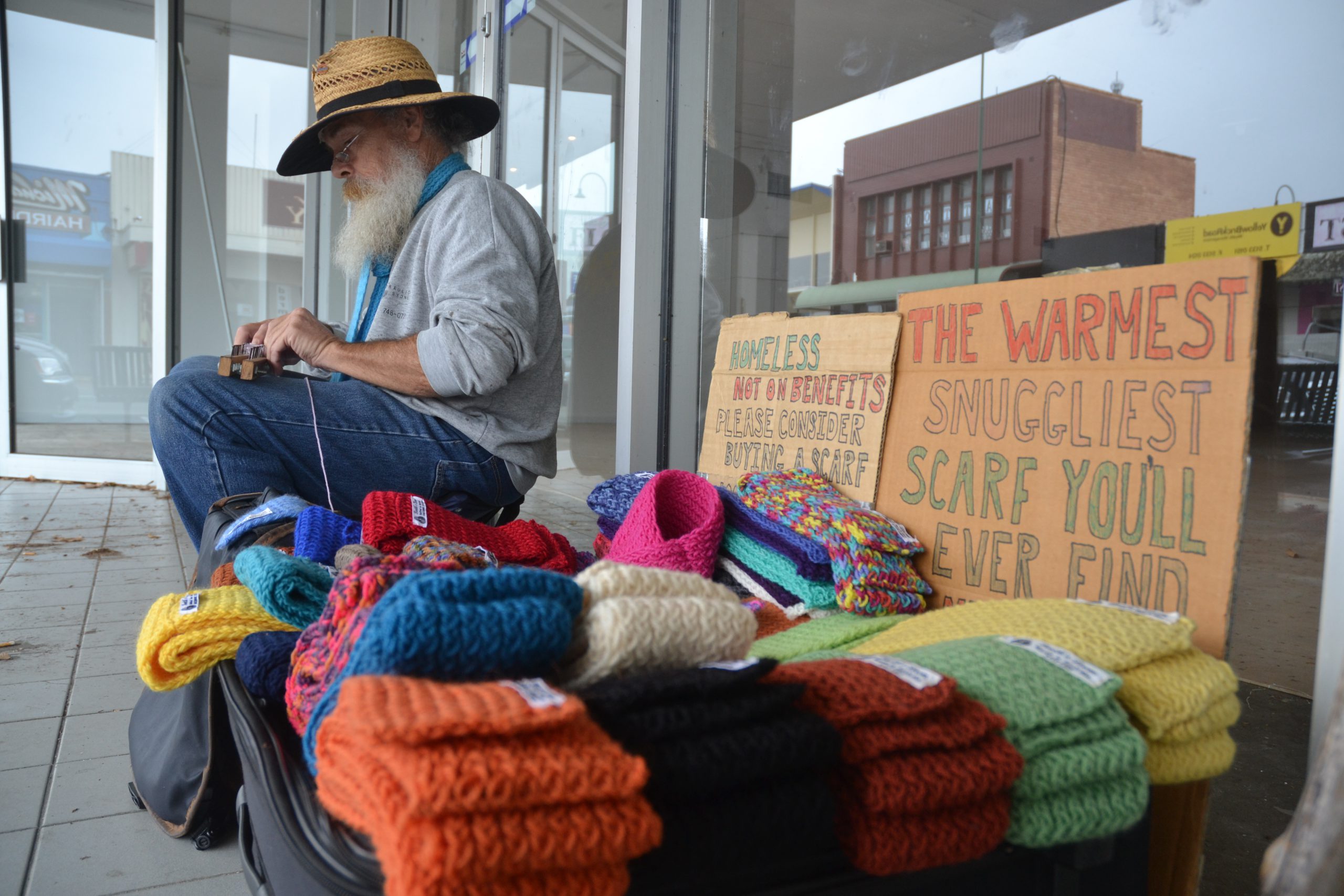 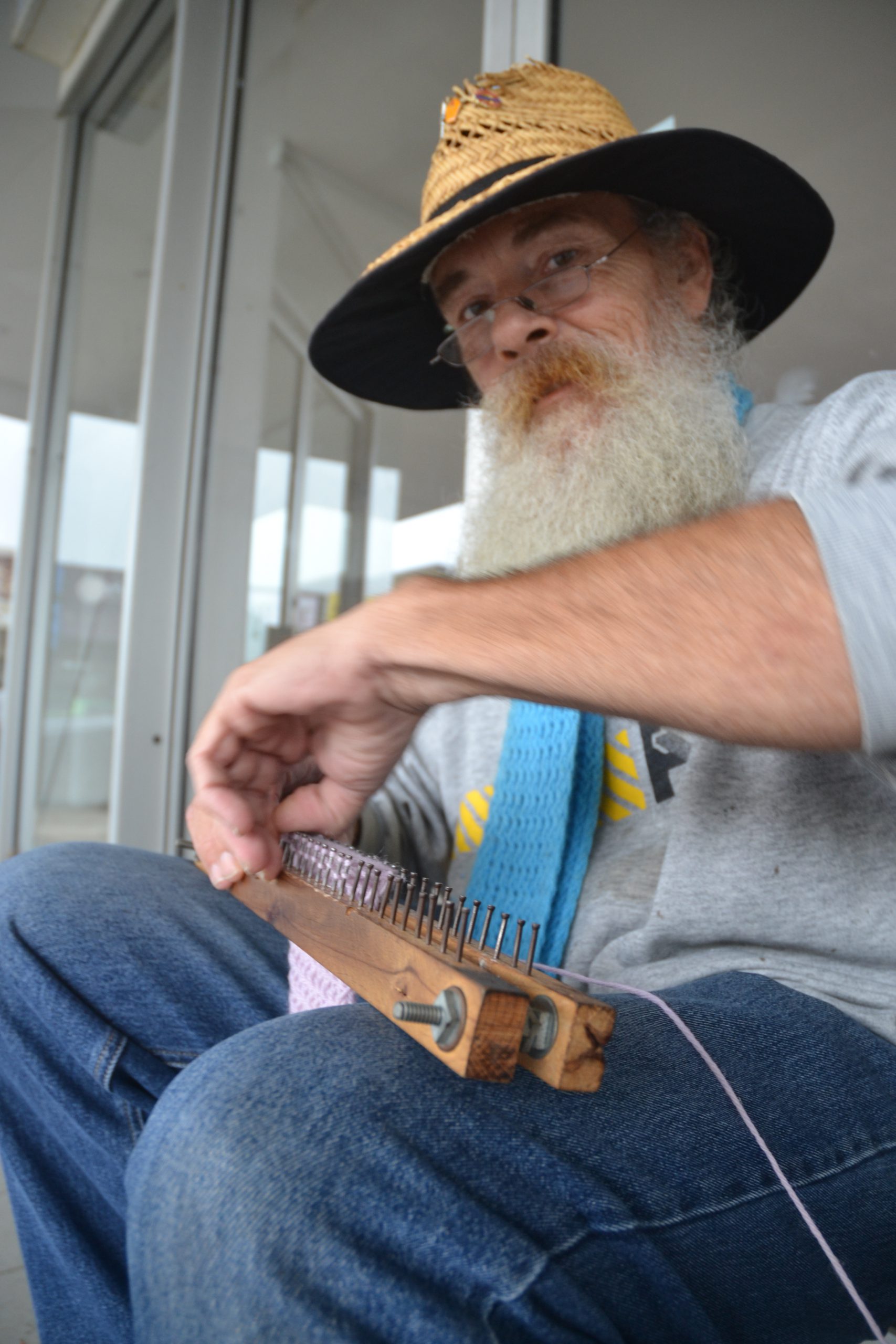 The first thing Jonathan ‘Tooth’ Kendall does when he rolls into a new town is locate the public toilets.

“I prefer McDonalds actually because I find their toilets are always nice and clean, I can also get a coffee there in the morning,” Tooth said.

“Then I’ll find a place like an empty shop front, or an outside mall or whatever, it just needs to be undercover to protect my scarves from the rain and sunlight.

“Then I need to figure out where I can sleep. A nice quiet street with not too much light is usually best.”

Sleeping in his Mitsubishi Magna station wagon as he travels town-to-town selling his hand-crafted scarves, is how the self-proclaimed ’21st century hobo’ has lived for the last two-and-half years. From his temporary outdoor studio in the old Spotlight shopfront on Commercial Road, Morwell, Tooth agreed to tell his story as he effortlessly worked died wools over a homemade ‘loom’ tool, crafting his second scarf for the morning.

“My friends call me Tooth and I’d appreciate it if you’d do the same,” he said.

It was a lifestyle chosen when he returned to Australia after 27 years living and working in England, to find his former qualification as a secondary teacher – specialising in mathematics and geography – was no longer recognised.

“I had been away so long I discovered they had changed the rules on me,” he said.

“They said I would have to go back to university, do another year, re-qualify, pay for the privilege and then they were gonna post me out to Woop Woop. So I said ‘no thank you, I know how to make scarves, I’m on the road. Bye’.”

For Tooth, the decision was logical; with his daughter’s university tuition already a financial burden, he “couldn’t afford to take a year off work”.

Named ‘Tooth’ after his voracious appetite in younger years – the 54 year-old’s extra padding has since ‘dripped off’, and his diet is somewhat more conservative these days.

“Sometimes I don’t often have more than a few razoos to rub together, but I can eat and put petrol in the car and that’s fine,” he said.

“My favourite dinner is Chinese special fried rice and you can normally get that for a ‘tenner’. It’s a good dinner really; it’s got veg, protein and carbs.

“Although I don’t eat that well, I try and have a banana everyday to keep potassium up. I’ll have a biscuit breakfast, a cuppa and a banana, then I won’t usually eat anything ’til the end of the day.”

In all his time on the road he’s never been asked to ‘move on’, but said he had an impromptu 4.30am identity-check from the “local constabulary” when sleeping in Traralgon last week.

“The station wagon is long enough to lay down in and stay dry. I figure I’m safe in there. I’d like to see someone try and break into my car without waking me up,” Tooth said.

Learning to loom as a nine year-old – long before the current bracelet craze swept through primary schools – he makes and sells just enough scarves to sustain his $25 per day living expenses budget.

Any extra goes straight into his daughter’s university fund.

“The sales vary, sometimes I sell more scarves than I can make. I can knit five balls’ worth a day pretty easily, which is a reasonable limit for me,” he said.

“In summer time, if I sell four balls’ worth I tend to pack up and take the rest of the day off. In some towns that happens by 10 or 11 in the morning.

“It’s a good thing if I can get through the summer time without harassing my savings. Right now I’m trying to build up a bit of stock for the winter.”

In Traralgon, he was selling “a couple of scarves a day”, while he had made at least one hit in his first day in Morwell.

“The only real hassle is finding somewhere to have a shower, which can be difficult in some of the little country towns. As far as cities go I don’t mind Sydney, but I don’t feel safe in Melbourne, I just don’t know my way around there,” he said.

“I just keep hearing all these bad stories about people getting knifed in the city, so I think ‘hang on, this place can’t be good’.”

Currently on the road for more than a month after a ’10-day rest’ at a friend’s house in Sydney, Tooth is unsure about his next destination, having travelled down the east coast through Bairnsdale.

“I meet a lot of strangers and a lot of them are asking the same questions and saying the same thing. Don’t get me wrong, I like meeting people, some of them are pretty interesting,” he said.

“But every now and then you get tired, that’s when you need a break. I really needed those 10 days off, having a toilet and a hot shower, I felt good again.

“Certainly while my daughter’s still at uni I can’t afford to do anything else. It’s no good arranging a house for me because I’d run out of my local market.

“There’s one thing people always ask me, ‘what’s your life like?’. I tell them it’s a crap living, but it’s a wonderful life.”