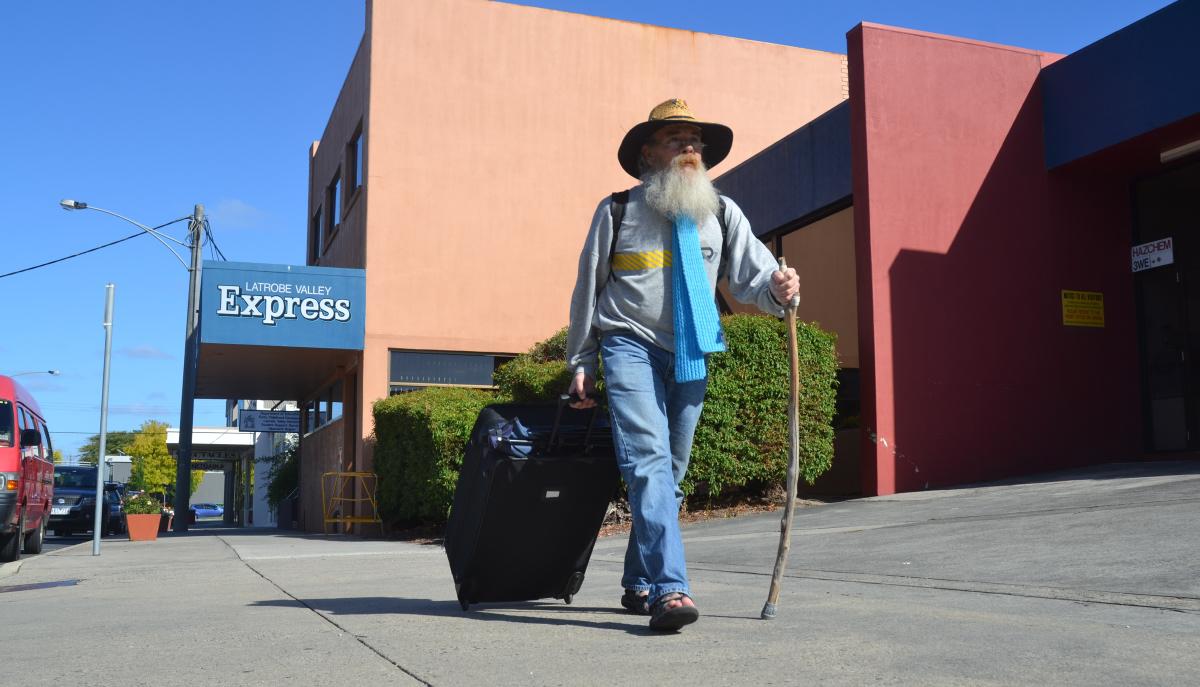 When homeless scarf maker Jonathan ‘Tooth’ Kendall rolled into Morwell last week, it was just another stop on his nomadic journey across Australia.

Crafting scarves on Commercial Road in front of the old Spotlight building, Tooth had prolonged his stay as he waited for a parcel to arrive at the local post office.

Now that his parcel has arrived, he has found it hard to leave.

“The smiles people have given me here have been just brilliant. It’s been really, really heart-warming,” Tooth said before heading off on Tuesday.

“People have offered me showers, beds, feeds; it’s all been really humbling and I look forward to coming back and seeing all my friends.”

Since featuring in The Express last Thursday, in an article detailing his day-to-day methods of living from the back of his station wagon, Tooth said he had been overwhelmed by the attitude of locals.

“I’ve been in a local newspaper before, in Eden, but I didn’t get the same response there. Here I’ve felt really welcome,” he said.

“In country towns people often react to a stranger on their streets by looking down their nose at you, but this place has got something special going on.”

Having learned of Morwell’s ‘troubles’ over the past 20 years, he said the town still had “real spirit” and sense of community.

“I know the town’s doing it tough, so I wish you all well. The generosity and kindness has been inspiring,” Tooth said.

“I’m going to leave this place a lot less tired than when I arrived, which is strange because I’ve been working like a Trojan since I got here.”

Having sold “quite a few” scarves in town – he was still hastily completing his last Morwell order at 10pm the night before his departure – Tooth said he was leaving town “with a bit of money in his pocket”.

He has had passers-by offer him coffee, jumpers, bags of fruit, and countless thank yous for bringing ‘a good news story’ to town.

Before leaving, Tooth said there was one Morwell scarf order yet unclaimed – a pink scarf for a New Zealand woman’s daughter.

If you are the ‘Kiwi’ who ordered the pink scarf, it awaits your collection at The Express’ Morwell office.