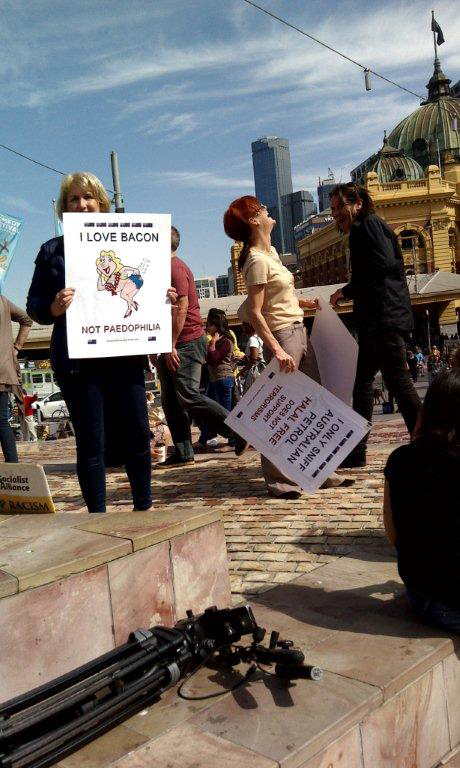 There are calls for State Government intervention following growing community outrage over the behaviour of Latrobe City Councillor Christine Sindt.

However, the government says Cr Sindt’s conduct is an issue for Latrobe City and potentially an independent panel.

Mayor Dale Harriman said a mediator had been appointed following requests for Cr Sindt to remove certain posts from her official Facebook page.

The Express understands plans are in motion for mediation to take place soon between Cr Sindt and Cr Harriman as council’s representative.

Last week Cr Sindt posted a picture of herself on her Facebook page at the ‘Reclaim Australia’ rally at Federation Square on Easter weekend. It followed a string of anti-Islamic posts on her page over the past month and her opposition to Latrobe City becoming a ‘Refugee Welcome Zone’.

Federal Member for Gippsland Darren Chester called on Cr Sindt to either apologise to the “thousands of residents she has offended” or resign as a councillor, labelling her actions and comments ignorant and unnecessarily divisive.

A Facebook page criticising Sindt has been established, along with an online petition calling for Local Government Minister Natalie Hutchins to intervene.

There will also be a ‘peace vigil’ outside council chambers to coincide with tonight’s meeting at 6pm.

Morwell resident David Hollis, who organised the vigil and established the petition, said the Latrobe Valley did not need “that sort of bigotry”.

“She can have her own personal view, but as a councillor she’s lending weight to those views,” Mr Hollis said.

Gippsland Multicultural Services director Lisa Sinha said the local Muslim community was feeling “really uneasy” and she was aware of one recent incident in which a family was verbally abused for their religious beliefs.

“We really want community leaders to step up because this isn’t something we’ve had in our community to this extreme before and certainly not something we want,” Ms Sinha said.

Member for Morwell Russell Northe said he was approached by a resident who believed they had been the target of racial vilification in the community since Cr Sindt’s public comments about Islam.

“That’s not what we’re about as a community. We’re a welcoming community, a diverse community,” Mr Northe said.

He called for an independent monitor to be reinstated at Latrobe City Council in order to address concerns about Cr Sindt’s conduct.

Lyndon Webb was appointed as an independent monitor by former Local Government Minister Tim Bull in August last year at council’s own request, to focus on governance, procurement, finance and relations among and between councillors and council officers.

His tenure ended at the end of last year.

“If the government considered ways and means to address this issue, maybe they should consider reappointing this monitor,” Mr Northe said.

Latrobe City Councillor Kellie O’Callaghan said there should be intervention at a ministerial level.

“I don’t think it’s the responsibility of the community to protest, demonstrate and have petitions available when the behaviour that’s being demonstrated is clearly causing concern for a broad range of individuals, families and community groups within Latrobe City,” Cr O’Callaghan said.

“No member of our community should have to fear or be fearful within their own home, their own town or country.”

A spokesperson for Ms Hutchins said racial or religious-based attacks should not be tolerated and as an elected representative, Cr Sindt needed to behave in a way that reflected her leadership role.

However, they said the minister did not have the power to intervene.

“Under the Local Government Act, every council should have a Code of Conduct in place,” the spokesperson said.

“Whether this matter breaches Latrobe City Council’s Code of Conduct is an issue for local councillors. In dealing with a potential breach of the code, councils can establish an independent Councillor Conduct Panel.”

The spokesperson said municipal monitors like that requested by Mr Northe were appointed where systematic breaches or governance issues had occurred.

“They are not appointed to monitor social media posts, as awful as they may be.”

The spokesperson said the government would review the Local Government Act including how it relates to councillor standards and governance.

The Express understands if an independent conduct panel is required, it would have the power to order Cr Sindt to take a leave of absence from her role and to remove material from her councillor Facebook page.