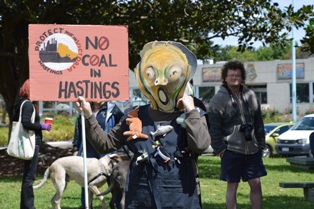 THE Victorian Ports Minister has been accused of feeding the Latrobe Valley ‘false hope’ by continuing to talk up the role of brown coal exports through a new container port at Hastings.

“I would also like to see them look at chasing down business in the energy sector, because the Latrobe Valley has enormous brown coal deposits, gas and so forth.”

Mr Donnellan’s comments were in line with ongoing efforts by numerous public and private Latrobe Valley stakeholders to develop new export avenues of alternative brown coal products from the region.

However the vision faces numerous roadblocks, including the financial viability of emerging coal technologies, the level of international market demand and poor existing transport links between the Latrobe Valley and Melbourne’s ports.

Ms Giles, a fierce opponent of a proposed container port due to the dredging which would be required in Westernport Bay, said the WPPC outright opposed the possibility of exporting brown coal from Hastings in any of its processed forms.

“It’s one thing to burn it in the Latrobe Valley for electricity use, but to think you use it to justify the expansion of a port is just ludicrous,” Ms Giles said.

“In a north wind, coal dust would disrupt ESSO, Bluescope and the township of Hastings.

“It would be disastrous environmentally, and would not make any money for the state after they had dried it, built a port and a railway, because it is such a low value product.

“I’m optimistic it won’t get up because it’s a ridiculous idea.”