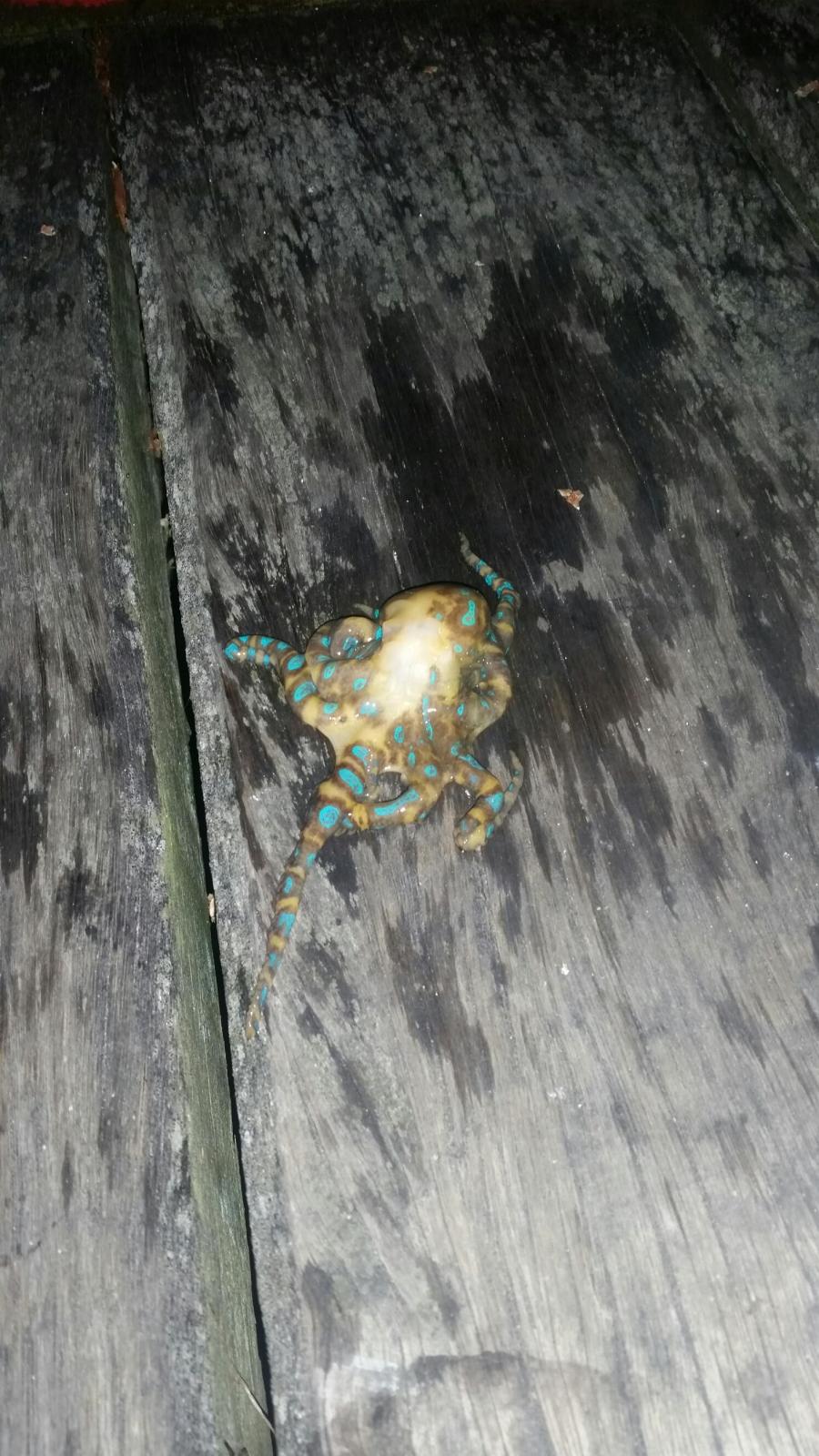 Beachgoers are being warned to take care if they come across a blue ringed octopus, following a Traralgon man’s close encounter last week with the tiny but deadly sea creature at a popular Gippsland fishing spot.

After netting what he thought was a harmless octopus while fishing at Port Welshpool jetty on Thursday, angler Zack Hall joked with a mate that it might be one of the deadly blue ringed species.

Then, perhaps feeling threatened out of water on the jetty, the octopus illuminated its beautiful blue rings.

“It was a bit of a surprise and then a tiny bit of panic given they are so deadly,” Mr Hall said.

He took the photo and with the frame of the net immediately ushered the animal back into the water.

He said at first he did not recognise it as a blue ringed octopus until it had felt threatened and shown its colours.

“As soon as you identify it you should just try to get it back into the water,” he said.

“They can’t do much to you if they are just swimming in the water, there’s no need to kill them, just get it back in the water.”

The notorious blue ringed octopus, found in shallow reefs and rock pools around the Australian coastline, is considered one of the most venomous marine animals in the world.

Although not aggressive, its bite causes serious paralysis and its victims can suffocate due to the inability to breathe.

Confirmed animal-related deaths in Australia from 2000 to 2010 according to the National Coronial Information System:

There is no antivenom and it is known to have caused the deaths of two people in Australia and one in Singapore, while many more have come close to death.

Dr Mandy Reid from Australian Museum’s malacology department said while common in Victorian waters, the blue ringed octopus was a “secretive” animal and therefore not often spotted by humans.

“They live in fairly shallow waters in among rocks, rock pools and crevices, but finding them out in open water isn’t completely unheard of, it tends to happen from time to time,” Dr Reid said.

She said the blue ringed octopus would not attack swimmers, however could deliver a potentially deadly bite if handled.

“They’re not aggressive, they just want to escape humans, but if they’re cornered or upset there’s a possibility they will bite,” Dr Reid said.

Dr Reid urged caution when reaching into crevices in rocks or picking up empty shells – a favourite living spot for them.

“Just don’t pick it (the octopus) up, don’t handle it even with a gloved hand because it’s been known to bite through a glove,” she said.

“It should be just left alone.”

The blue ringed octopus has an arm span of less than 15 centimetres.

Of the three species formally described, the most common in Victorian waters is the southern blue ringed octopus.