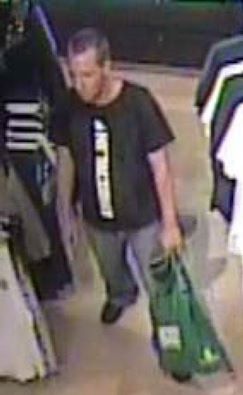 A 22 year-old man and 24 year-old woman have been charged for drug possession and weapon offences at Yallourn North.

Latrobe Valley Police observed a vehicle parked on a dirt road in a pine plantation with three people on board on 2 January.

Police searched the vehicle and occupants, locating weapons, a set of reproduced number plates made from cardboard and various types of drugs paraphernalia.

The man and woman have been charged with possessing drugs, weapons offences, bail offences and going equipped to steal.

They have been bailed to front Latrobe Valley Magistrates’ Court at a later date.

Police wish to speak to the man pictured as he may be able to assist with their enquiries.

Police believe the man left the shopping centre in a maroon coloured sedan.

He is described to be aged in his 40s and has acne scarring. At the time of the incident he was wearing a dark T-shirt with a motif.

Anyone with information about the theft or the identify of the man pictured should phone Crime Stoppers on 1800 333 000, visit www.crimestoppersvic.com.au or phone the Latrobe Crime Investigation Unit on 5131 5000.

A man has been stabbed in Moe with a large kitchen knife during Australia Day celebrations.