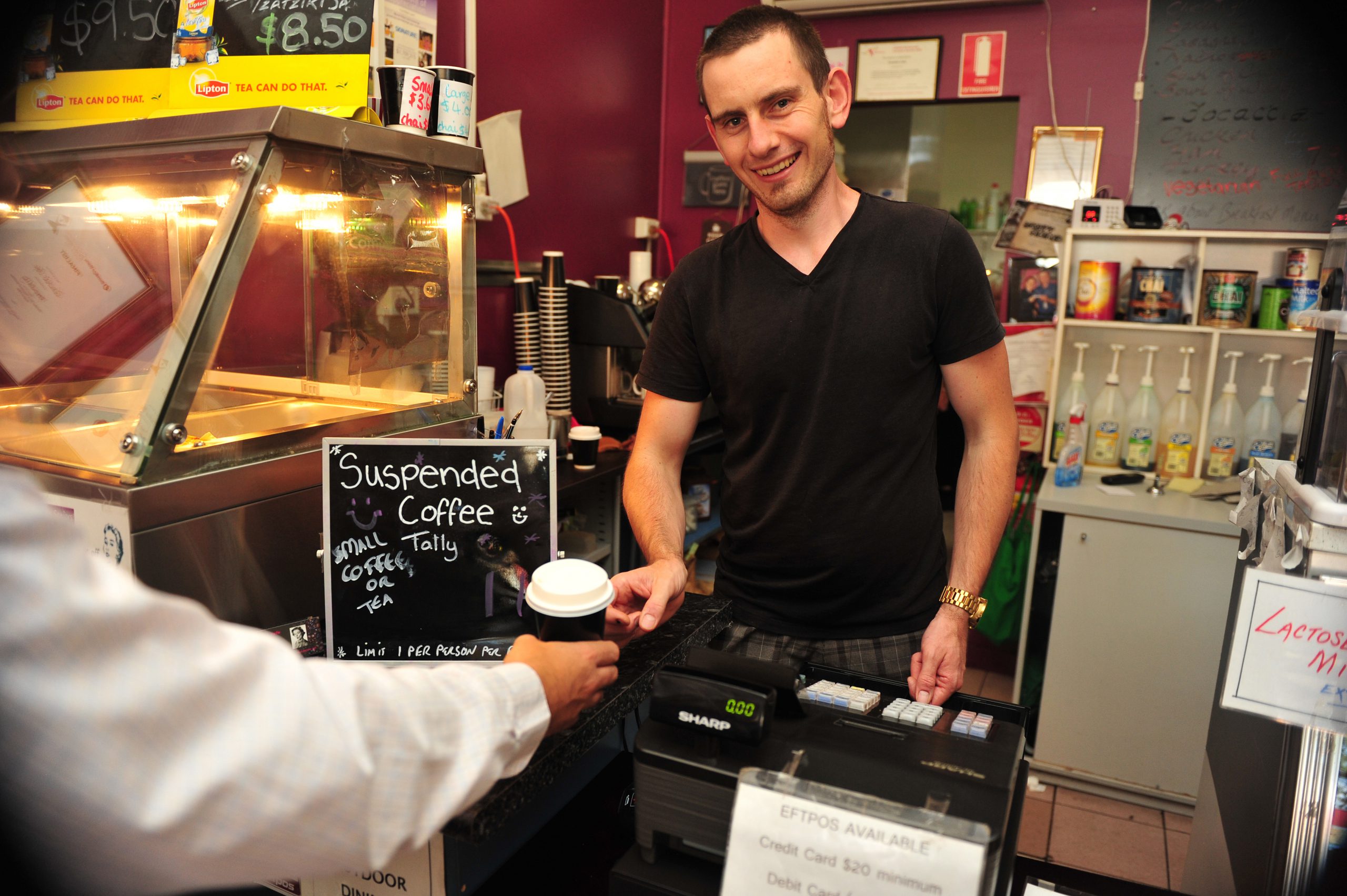 SHOUTING a stranger a cup of coffee might seem out of the ordinary at first.

But the Naples tradition – to order a coffee ‘sospeso’, or coffee ‘in suspense’ – became a global phenomenon almost overnight back in 2013.

The idea is for those experiencing good fortune to buy a cuppa for someone who may be down on their luck or light in the wallet.

Three years later and the movement is showing no sign of slowing down, with Suspended Coffees founder John Sweeney still pinching himself.

“My goal literally was to get a couple of caf s on board within a couple of months and maybe get a few people promoting it,” Mr Sweeney said.

“I knew it was an amazing idea and I knew it was something people would get behind, but I never in a million years thought it was going to kick off like it did.”

The pay-it-forward movement hit the self-described ‘kindness coach’ unexpectedly with more than 1400 cafes joining the movement in its first year.

His modest goal almost instantly transformed as Suspended Coffees societies started up across the world, including in Melbourne, with a small number of Latrobe Valley caf s jumping on board.

“The idea, it’s based on an old tradition, and in some ways I suppose maybe I reignited that by creating a movement dedicated to driving it,” Mr Sweeney said.

“For me, being able to connect people and give them a sense of community and a sense of belonging, something as simple as a concept like this is amazing.”

Mr Sweeney described caf s as the hub of their community, where baristas knew their customers, what coffee they ordered and could tell whether they were having a bad day.

While he admitted coffee was the driving force behind the cause, he said there was a lot more to it – “it’s about connecting humanity through kindness”.

The 31 year-old Irishman was advised to leave school at 15 to pursue a career in plumbing, despite telling “everyone and anyone who’d listen I didn’t want to do it”.

He had missed “a massive amount of school” due to bullying and was told his desire to pursue work in social care or social sciences was unrealistic.

But starting the Suspended Coffees movement has allowed Mr Sweeney to realise that dream.

Following a TEDx talk last year about the movement and “why kindness matters”, he has spoken at various events to share his story.

A little more than a year ago, a charity invited Mr Sweeney to become a certified life coach – something he’s been practising ever since.

“For me, that’s been one of the biggest transformations that’s happened – in all of this, finally I’m at a point where I see the value that I have and the contribution that I can make,” he said.

He currently bases himself in the Irish city of Cork, supported by a core team of four full-time volunteers who help run the website, caf lists and social media platforms.

While Mr Sweeney also works to support his family, he said there were exciting things in store for Suspended Coffees’ future.

“The beauty of this is that it connects people in a very unique way,” he said.

“It lets them know that regardless of what you’re going through or what your day is like, someone, somewhere cares.”

IF one was to look at the running tally of suspended coffees available at Claudia’s Caf , they could be quick to assume the initiative attracts few people.

Interestingly, a low tally of 10 means the pay-it-forward movement is working as it should, with a steady stream of people both contributing and redeeming coffees.

“(The response has been) phenomenal,” caf owner Claudia Davies said.

“We started off with heaps of suspended coffees, but no one was redeeming them yet, because people didn’t know about them.

“Now we sit on about 10 – (coffees are) going in, going out – the system is working exactly like it is supposed to.”

The idea for Claudia’s Caf to join the movement came from a customer, reflective of the locals who often looked out for each other.

Describing the system as self-sustaining, never having to top the suspended coffees up herself, Ms Davies believes it is a “beautiful thing” to watch.

While most regulars contribute to the cause, those who redeem a cup are “across the board” – from the unemployed to the elderly.

Ms Davies encouraged other businesses to jump on board the initiative, providing individuals the luxury of a warm cuppa without costing the caf a thing.

“Sometimes we want to do more for our fellow human beings in our community, especially our neighbours in our towns and we don’t always have an outlet to do that,” she said.

“A lot of people who haven’t heard of it will ask about it,” she said.

Having taken over the business about 18 months ago, Ms Ward and her daughter recently signed up to the initiative to benefit those short of cash.

She said while it may not become a massive movement in the area, it was simply a nice way to help others out.

“We’ve had one or two people come in and they’ve maybe been a bit short of cash or left a wallet at home,” she said.

“So it’s a nice way to get a cup of coffee without feeling weird about it or asking for credit or anything like that.