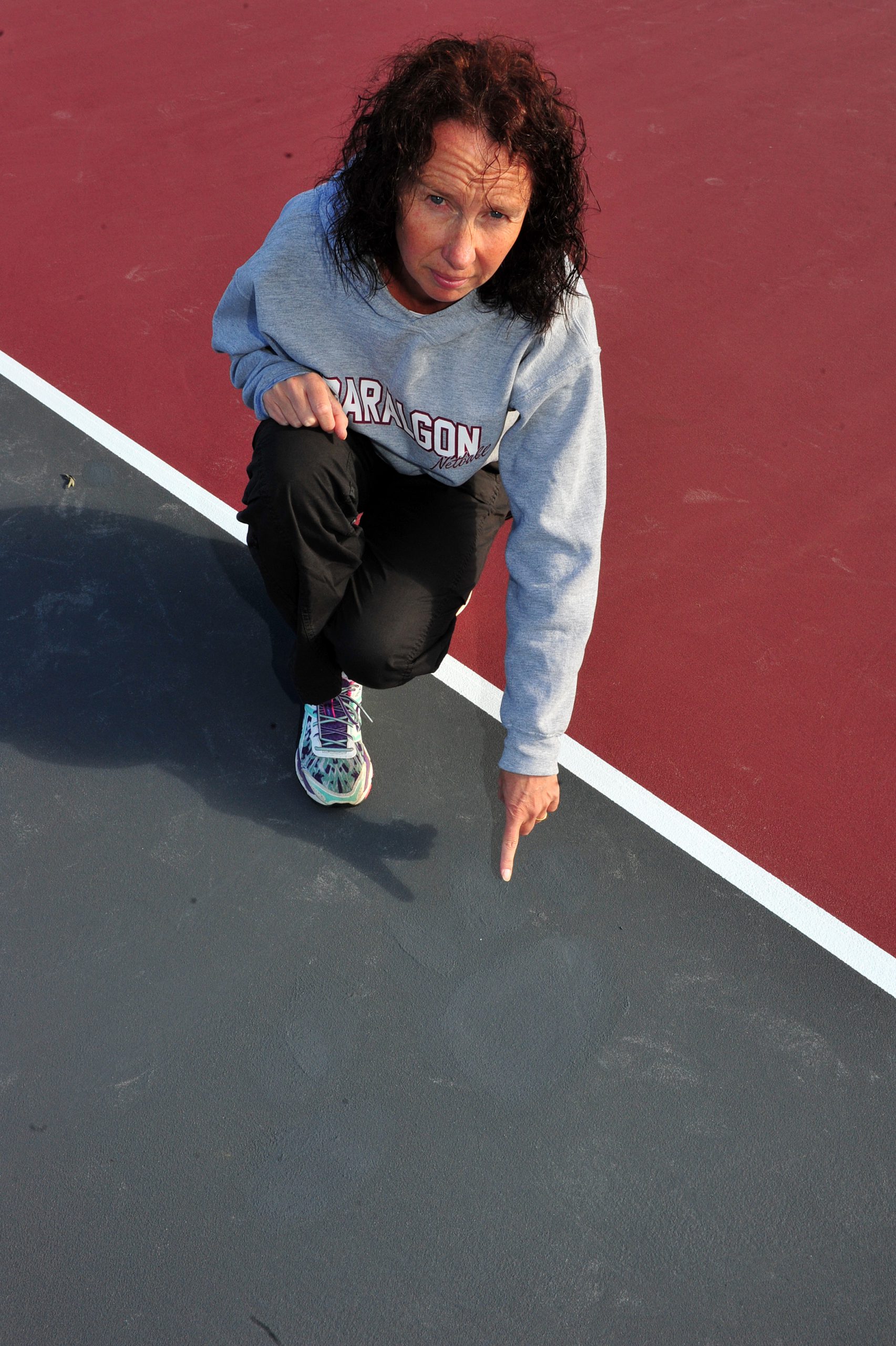 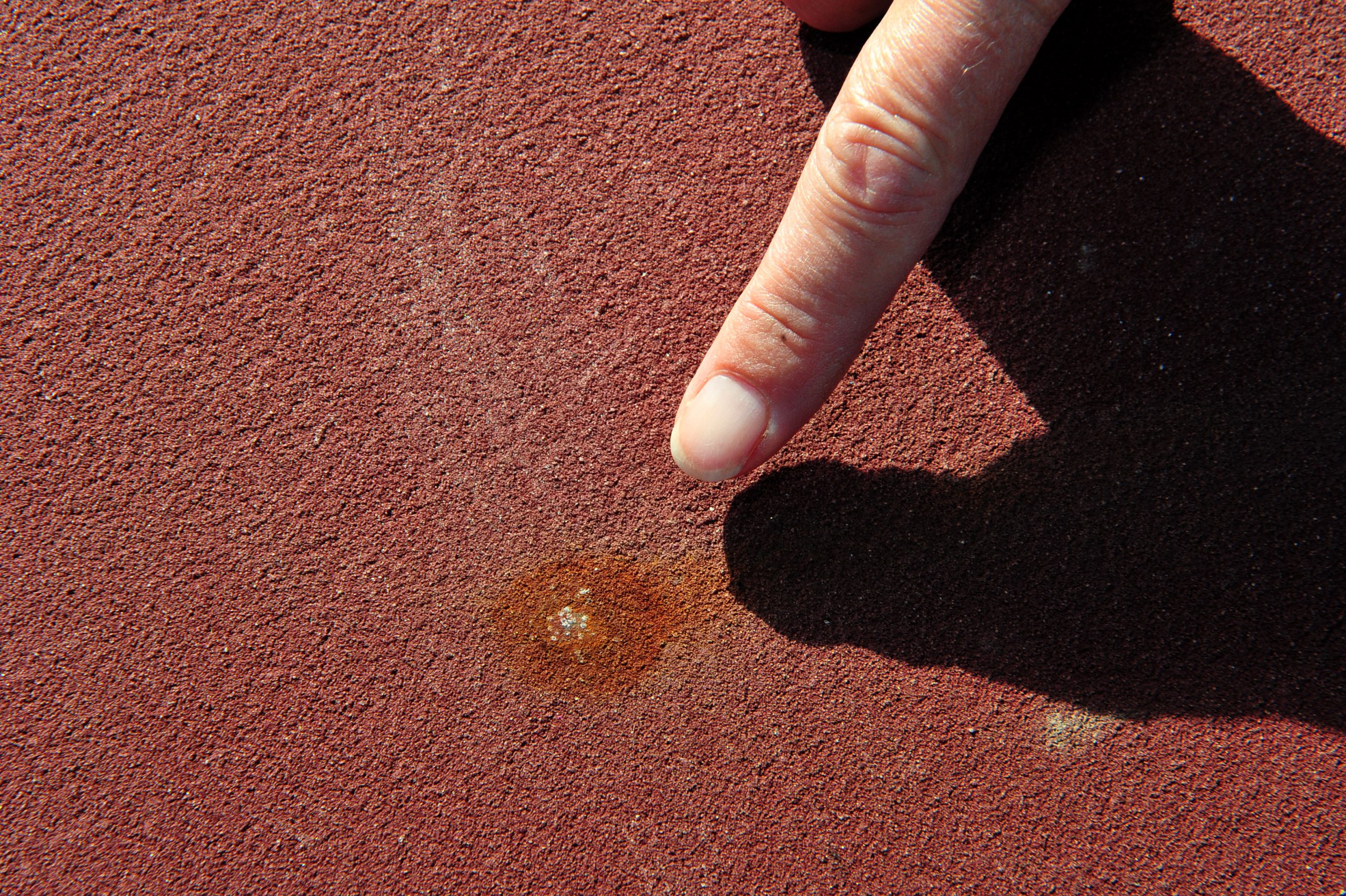 Rust-like stains, a peeling surface and a slippery residue are plaguing the Traralgon netball courts, despite previous efforts to repair the facility.

Latrobe City Council has moved to assure the netball community the damage is aesthetic only, not structural.

The damage was noticed after the season’s first day of play on Saturday, a frustrating blow to the courts’ main user group the Traralgon Netball Association, which had delayed the start of the winter competition by two weeks to allow repair works on the new surface to be carried out.

The facility underwent a major revamp two years ago with the installation of acrylic courts, but weeks later, rust-like stains began to appear on the surface, later developing into holes.

According to council, this was caused by contaminants in the asphalt overlay.

According to Latrobe City, the work was undertaken by the original contractors, using a specialist to apply the waterproofing layer at no cost to council.

Ms Eenjes said the decision to play on Saturday came after consultation with Latrobe City Council and contractors.

She said the association was advised the rear courts would be playable, but not yet completed as they would have no boundary lines.

Repairs to the front courts had been completed.

Ms Eenjes said players arrived to find temporary fencing still in place and three of the six back courts with not just the boundary line missing, but other line marking critical to the game.

“We had to postpone the under 13b competition and we used builders chalk to mark the other courts to put the remainder of the games on,” Ms Eenjes said.

She said three of the rear courts, on which two games each were played, developed a sandy residue, making them slippery and unplayable.

Ms Eenjes said other issues included court surface peeling and in some areas the return of the rust-like stains.

On Monday night, Latrobe City Councillor Kellie O’Callaghan moved a matter of urgent business that council take immediate action to inspect, stabilise and prepare a work plan to ensure the surface is safe and appropriately repaired.

He said an inspection by council engineers and management on Monday found the surface of the area surrounding the courts that was applied last Thursday in readiness for Saturday’s netball games was affected by cooler weather.

“The surface did not have as long a period of curing as would have been preferred, resulting in some areas not adhering to the waterproofing layer,” Mr Piasente said.

“The areas not damaged are adequately cured and we expect no problem from them.”

He said council and the contractor, WM Louds (sub-contractor to principal, Cranes Asphalting), were working to repair the failed areas yesterday and today and would monitor the situation over the winter.

“WM Louds has committed to undertake further repairs – including a full rework of the surrounds if necessary – next summer,” Mr Piasente said.

He said during an inspection, the contractor noted that the sand applied to the epoxy waterproofing within the courts interfered with the acrylic playing surface applied last week.

“This only remains an issue until the sand is removed. Play over the weekend has accomplished most of the sand removal.

“Council understands the community concerns around the playing surface but wishes to assure the netball community that the damage is aesthetic only, and not structural.”

Upon inspecting the courts yesterday afternoon, Ms Eenjes said she would deem them safe to play, however future decisions on the safety of the courts would be made week-by-week.