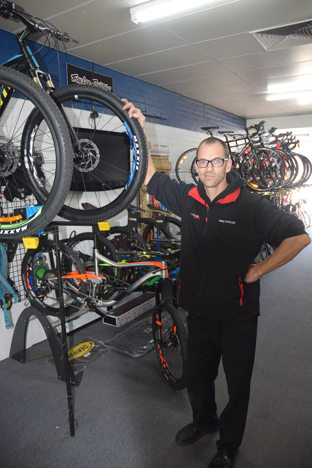 The owner of S and J Cycles in Morwell, believes the closure has not had an impact on trade for his business, but says time will tell.

“I think we’ll be okay as one, as the Valley we’ll stand together. Everybody will come together and help as they always do,” Mr Dunn said.

“It’s important to support the local fellas who are still here. We need to back these companies and businesses that are still going in Morwell.

“We’re a Valley trader and our customers come from far and wide but it’s going to have an impact on everybody.”

Mr Dunn, whose clientele is made up of many Hazelwood employees, said a lot of his customers were doing it tough.

“A lot of them are uncertain about their future but most of them have their chins up and ready to plough on with life I think,” Mr Dunn said.

“But when they’ve got kids and homes and bills that keep coming in, they need to be employed.

“You’ve got these guys ready to transition to certain areas but there’s a lot of guys that aren’t transitioning because of a lack of options. There’s a lot of people that are moving away too.”

The Morwell business owner of 13 years said he felt not enough opportunities were being offered to the workers of Hazelwood and their families.

“They’re coming from the power sector so they need to be transitioned into that style of work,” Mr Dunn said.

“Some of them would be like fish out of water putting them into something they’ve never had a hand at. The rehabilitation at Hazelwood won’t employee too many people either.

“Try and put some of these guys in front of a computer or in an office and it isn’t going to work too well. The next six to 12 months is going to be a really big indicator.”