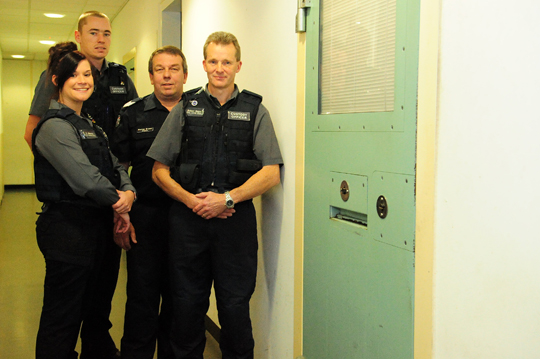 If you’ve ever considered joining the force, becoming a Police Custody Officer is a good way to dip your toes.

Victoria Police is on the lookout for people to take on Supervising Police Custody Officer roles at Morwell police station.

The PCO role was introduced in January last year in an attempt to relieve police from custody-related duties, allowing them to concentrate on frontline policing.

Now, after almost 16 months since PCOs were rolled out across 15 Victorian stations, the force is looking to recruit supervising officers to the role.

“The four supervisor positions that are coming up will relieve the Custody Sergeant to go on and do other duties like general policing at Morwell,” Sergeant Murray Brown said.

“We’ve got 20 police custody officer positions here at Morwell. That’s allowed police to get back on the road and do other duties that they would’ve otherwise been tied up doing in the custody area.”

The PCOs are responsible for the welfare of people in custody and perform a similar service previously undertaken by police members rostered on for custody duty.

“One of the fears was that PCOs would be treated differently to police, but the fact is people that come into custody actually trust PCOs more than police,” Sgt Brown said.

Up until now, a Custody Sergeant has been responsible to oversee PCOs at Morwell police station.

One Police Custody Officer at Morwell, Sarah Watson, said she joined as a PCO to segue into the police force.

“We had to go through a process before we got into the academy that included an exam, physical and psychological tests, then we had a panel before we did eight weeks of training at the academy,” Ms Watson said.

“We did defence training with baton and spray, law classes and how to hold ourselves in the cell while we’re talking to someone.

“I find we’re very well supported by the police so they’ve always got our back and there when we need them.”

The PCOs are also responsible for escorting those in custody to court and sitting with them in front of a magistrate or a judge.

Another PCO at Morwell, Robert Evans, came into the role with no prior policing experience.

He said one of the key traits people required was the ability to communicate.

“At the end of the day you treat them professionally and look after their welfare. Many of those in custody will return the favour,” Mr Evans said.

For more information and to register your attendance visit policecareer.vic.gov.au/pco/info-session