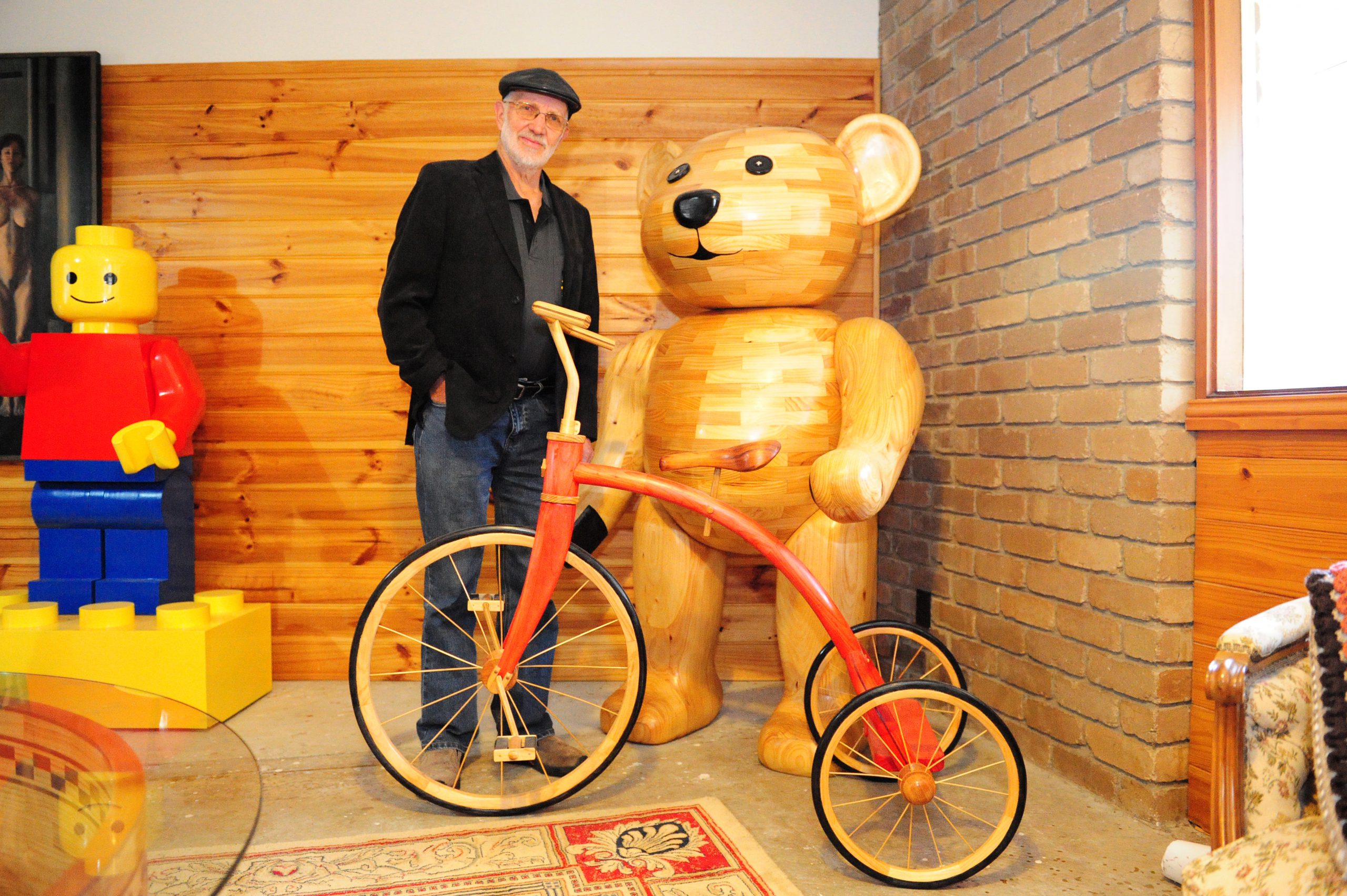 Jolting the old powers of recall, Hazelwood South sculptor John Abery has created a range of giant toys to explore the theme of childhood memory.

“My memory of my childhood and the things we used to have is trying to evoke in the viewer their childhoods,” Mr Abery said.

“Going back to when they were young, and what they had as toys, is what the exhibition is all about. Also what children have today, this computerised stuff, we didn’t have that.”

He said his giant toy sculptures provided a contrast to the toys of today.

“This bowl is six foot in diameter and full of marbles made out of wood.

Mr Abery’s exhibition also features a six-foot-tall teddy, a giant Meccano set and a Lego man who stands more than a metre high.

He said he began sculpting “by mistake”.

“My my wife died about 20 years ago. I was a house dad and I was bored so I rang up TAFE to see if they had a space in the art department and they did in the sculpture department. I went from there to Monash and did my degree,” Mr Abery said.

“When I first started off with sculpting, I was working in large organic forms… all made out of little blocks glued together. The next one I did, I worked in surreal musical instruments (with) feet and hands. You couldn’t really play a tune on them.”

A carpenter by trade, Mr Abery said his art practice was mainly limited to sculpting.

“I’ve worked in steel and bronze and I’ve been mostly doing wood recently. I’ve just made myself a steel-work studio, so I’m now heading into steel.

“All my wooden (sculptures) are indoor stuff, but with the steel ones I can stick them out in the garden.”

He said he had experimented with his practice in a number of ways.

“But when I went to TAFE and did the sculpture course, they told me I had to go and do a drawing course. And I said ‘I can’t draw’ and they said ‘of course you can, go and draw’ and that’s what lead me to painting. I don’t do a lot of painting anymore but at the time I did.”

“I’ve had some exhibitions before. Particularly I’ve had some over at arcYinnar and I have exhibited at the (Latrobe) Regional Gallery. I have done in Melbourne and I have actually got a painting (exhibited) in America.”

Mr Abery’s exhibition on childhood memory will be held from 6 August to 25 September at the Cowwarr Art Space. For more information, visit www.johnaberysculptor.com