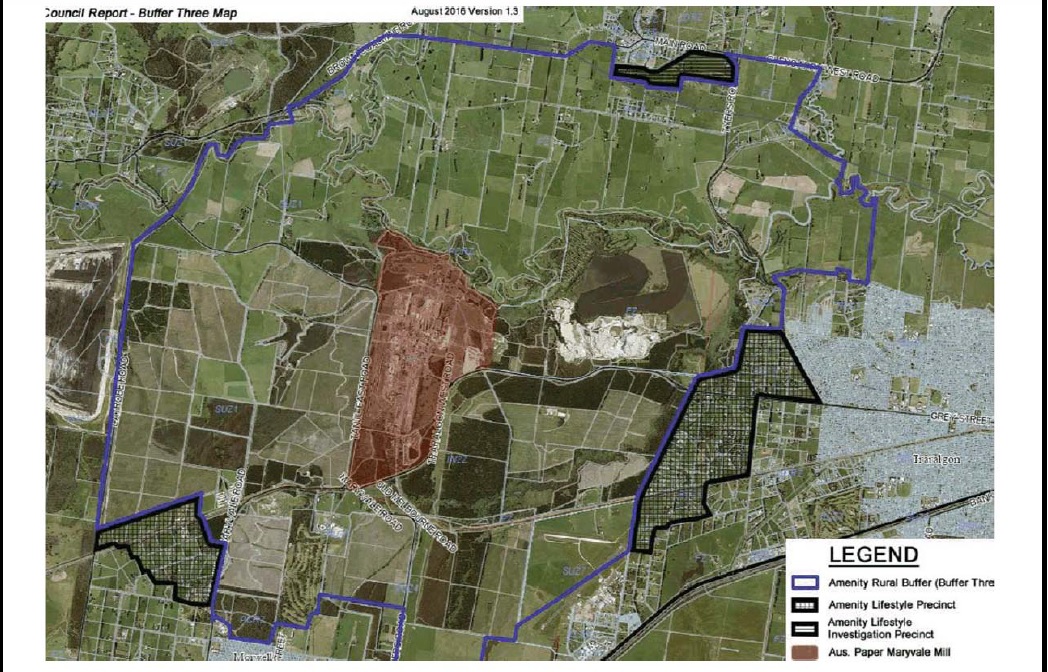 A Latrobe City councillor says the state government’s proposed boundary changes to a community-supported odour buffer for Australian Paper’s Maryvale Mill is a “slap in the face” to the those involved in the consultation process.

Speaking at the Latrobe City Council meeting on Monday, Cr Graeme Middlemiss said Planning Minister Richard Wynne had included areas of Traralgon west, Morwell north and Tyers in the proposed odour buffer, which he said could inhibit growth and development in those areas.

“In September last year, the previous council passed a resolution that indicated that all parties agreed (on) the odour buffer limit,” Cr Middlemiss said.

“There was a lot of negotiation, tests done, discussions with affected communities… the EPA acted as a mediator, we had the Victorian government on board, the three community areas had small committees.

“If the minister wanted change, he should have talked to (the)affected communities.”

Councillor Dale Harriman said a number of residents had fought to get the odour buffer boundary to the agreed-upon point.

“To see it pushed back even further is disappointing,” he said.

“We all know that rural living is the future for economic development.

“By losing those areas… it denies the ability to grow and attain services.”

Latrobe City mayor Kellie O’Callaghan will write to Mr Wynne requesting that, in light of the all-party agreement, he does not approve the amendment in its current form.

A spokesperson for Mr Wynne said the Department of Environment, Land, Water and Planning was still assessing an amendment lodged by Australian Paper to introduce protections over its buffer area.

“The Minister will consider this amendment on its merits once he is presented with advice from the department,” he said.

“Any decision would seek to strike a balance between protecting the nearby environment and township, and ensuring Australian Paper has the opportunity to expand its business and employ more locals.”

The Planning Minister approved the Latrobe Planning Scheme amendment in July, after which Australian Paper lodged a request to introduce an Environmental Significance Overlay to the buffer area.

According to the government, The Department of Environment, Land, Water and Planning is speaking with both parties about their concerns.

The minister will consider the amendment once the department has resolved submissions from council and Australian Paper and has presented him with its recommendations.

Australian Paper senior marketing manager sustainability Craig Dunn said “Australian Paper is supportive of the establishment of an appropriate buffer around our Maryvale operations to provide the mill and the community with planning certainty into the future.”