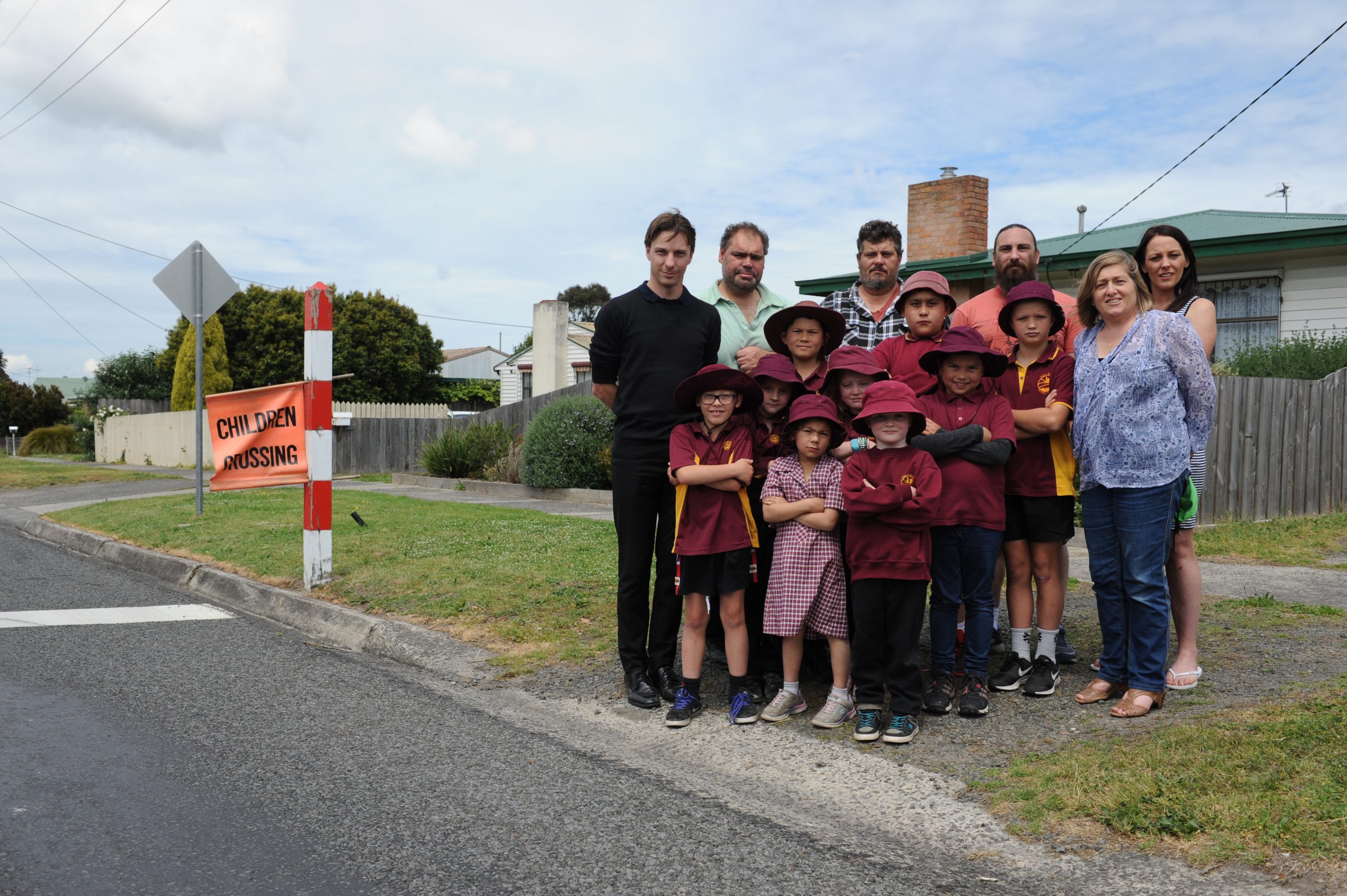 The principal of Yallourn North Primary School has thrown his support behind a push to update safety measures at a pedestrian crossing on Main Road in Yallourn North.

School principal Kieran Kenneth has called on Latrobe City Council to consider safety upgrades at the crossing after a group of residents and primary students gathered at the crossing to vent their frustration last week.

“It’s probably one of the busiest roads in town and we know [council] always come back with the ‘it’s got low [pedestrian] numbers’ but surely something can be done to highlight the fact it is a school crossing,” Mr Kenneth said.

“Currently as it stands today, very few people actually stop even though we are actually standing at the kerb and the flags are out so by law they should stop, but don’t.”

The crossing is one of two in the town and is used by school children during the morning and afternoon to cross the road.

Mr Kenneth’s intervention follows concerns raised by Yallourn North resident Az Glibanovic about the children’s crossing near the Yallourn North Pub, which were published in The Express last month.

He said while the red and white safety bollards were visible, he believed there wasn’t enough signage to warn drivers to slow down and give way to pedestrians.

He also claimed that it was “only a matter of time” before someone was killed and said drivers weren’t obeying the crossing and giving way to pedestrians.

Yallourn North resident and mother of three Nadine Wade said she often witnessed drivers ignoring the crossing when the flags were displayed and was forced to make her kids cross at a “safer section” of Main Road.

“Kids are going to get hurt or killed because they speed past here,” Ms Wade said.

“We feel angry and annoyed that it’s been ignored.

“We need a zebra crossing and some speed humps to slow down the traffic and make our kids safe.”

While crossing flags are displayed before and after school, residents said they were concerned the speed limit remained 60 kilometres per hour at all times.

Mr Kenneth echoed Ms Wade’s sentiments and said the school had attempted to educate parents and warn drivers to slow down near the crossing.

“Whether they can come up with something that alerts people it is a crossing and that it’s in operation because currently we have little kids trying to cross the road and unfortunately the adults who have the ability to know what to do are doing the wrong thing … it could lead to disaster,” Mr Kenneth said.

“The issue is unless they see a lollypop person don’t actually think that it’s a crossing even if the flags are out because they just drive straight through.

“I do like the idea of the zebra crossing and speed bumps that makes drivers realise they actually have to slow down because unfortunately we are a rural town and don’t receive a lot of policing.”

Mr Glibanovic said he had attempted to speak to Latrobe City Council and police about the issue but “they told me not much can be done” and “it just appears to be bureaucracy and red tape”.

Another resident said since the Princes Freeway was closed for six months in 2011, Yallourn North had experienced a higher flow of traffic through the town and “nothing had been done to slow down traffic”.

“Road safety is a priority and ensuring that signage is clear is an effective tool to reduce risk,” he said.

However in the statement, Mr Piasente said the pedestrian crossing on Main Road, Yallourn North did not meet minimum usage rates of 300 vehicles per hour for a crossing attendant to be funded at the site.

“Council is happy to meet with the concerned resident[s] to begin initial conversations and discuss options available,” Mr Piasente said.

“Safety of students and pedestrians is paramount. We would urge motorists to use caution in any built-up area, and especially around schools.”

He said there were a number of factors that VicRoads would have to consider before a speed reduction was approved.