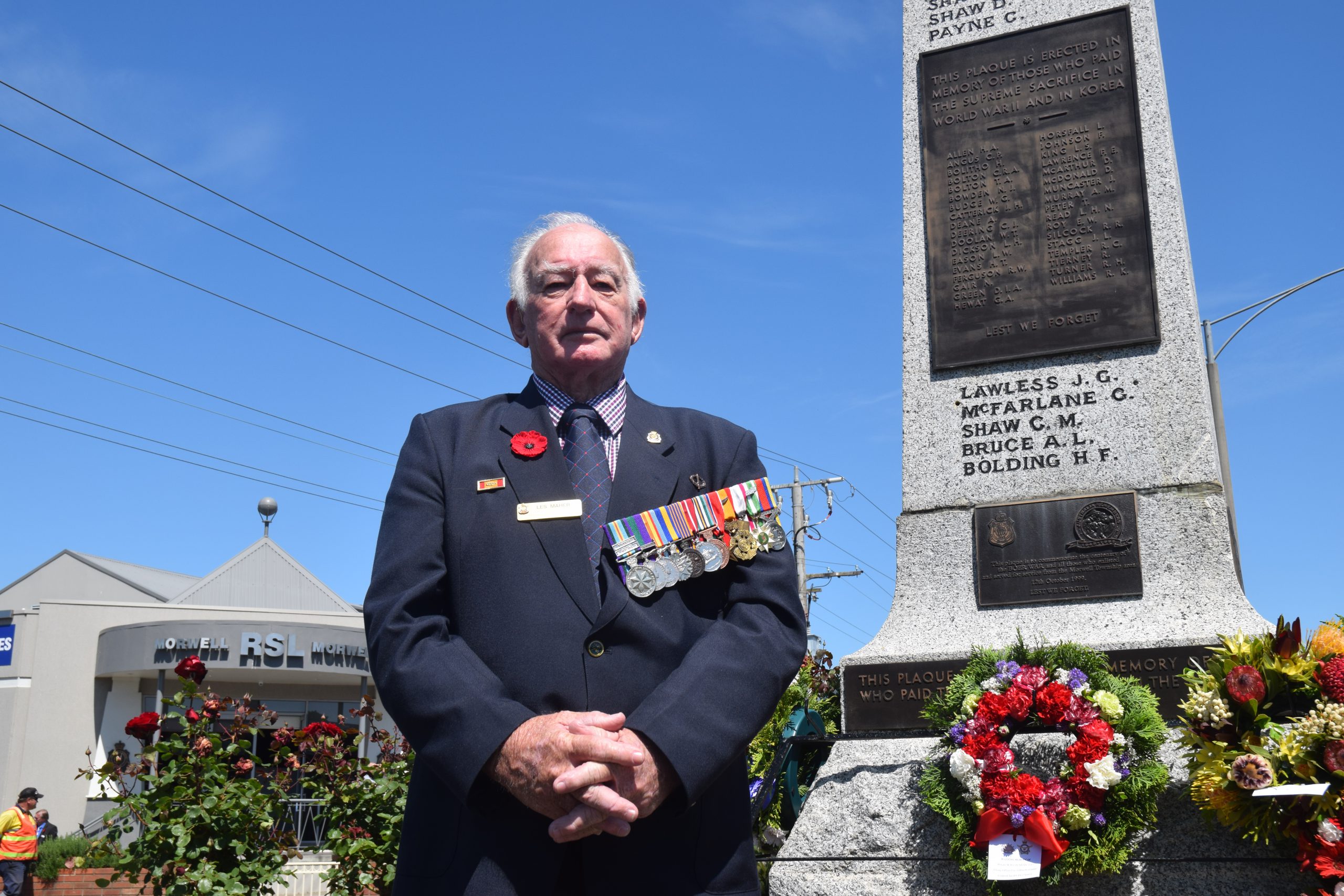 It has been a tradition for quite sometime for Morwell RSL senior vice president Les Maher to take to the lectern on Remembrance Day.

Some people described him as “part of the establishment”, others “an astute gentlemen and hard worker” following Saturday’s morning service but for Mr Maher emceeing the RSL’s annual Anzac and Remembrance Day services is an honour he holds close to his chest.

Mr Maher moved to Morwell 18 years ago after retiring in the Northern Territory at a “pretty young age”, shortly before moving to Queensland and then to the Latrobe Valley in 2000 to escape the warm conditions.

“When we were coming back to Victoria, my wife’s Victorian, we decided we didn’t want to live back in the metropolis of Melbourne so somebody said ‘why don’t you go up to the Latrobe Valley because the house prices are good?’,” Mr Maher said.

“We came to Morwell RSL and we were accepted … and later on when I went back to Vietnam to find the missing-in-action bodies the RSL was very helpful. Then I joined the committee before they eventually made me senior vice [president].”

After a year serving his country at Holsworthy in New South Wales, he joined the regular army before serving in Malaya for two years.

On return to Australia in 1959 he became an instructor for new army recruits before moving to the Officer Cadet School at Portsea in the mid 1960s.

Following some considerable service in the army, Mr Maher travelled to Vietnam in 1971 as part of the Australian Army Training Team where he spent 12 months as an advisor to the Vietnamese army.

“At that stage the Vietnamese were doing it pretty rough … we worked in operations to make sure they got the artillery support they required.”

Now aged 81, Mr Maher said he has no intention to take on the top job citing he was “looking forward to retirement at the end of next year”.

He said Remembrance Day served an important purpose on the national calendar to honour the veterans who had lost their lives through unfortunate circumstances.

“If we don’t remember the people that have gone before us, then nobody is going to remember us,” he said.

“Sure Remembrance Day is vastly bigger in the city but these country services are essential to pay respect to the soldiers that have gone before us.”

Seventeen Morwell RSL members lost their lives since the 2016 Remembrance Day service, recognised by Mr Maher on Saturday where 32 wreaths were laid on the Tarwin Street cenotaph.