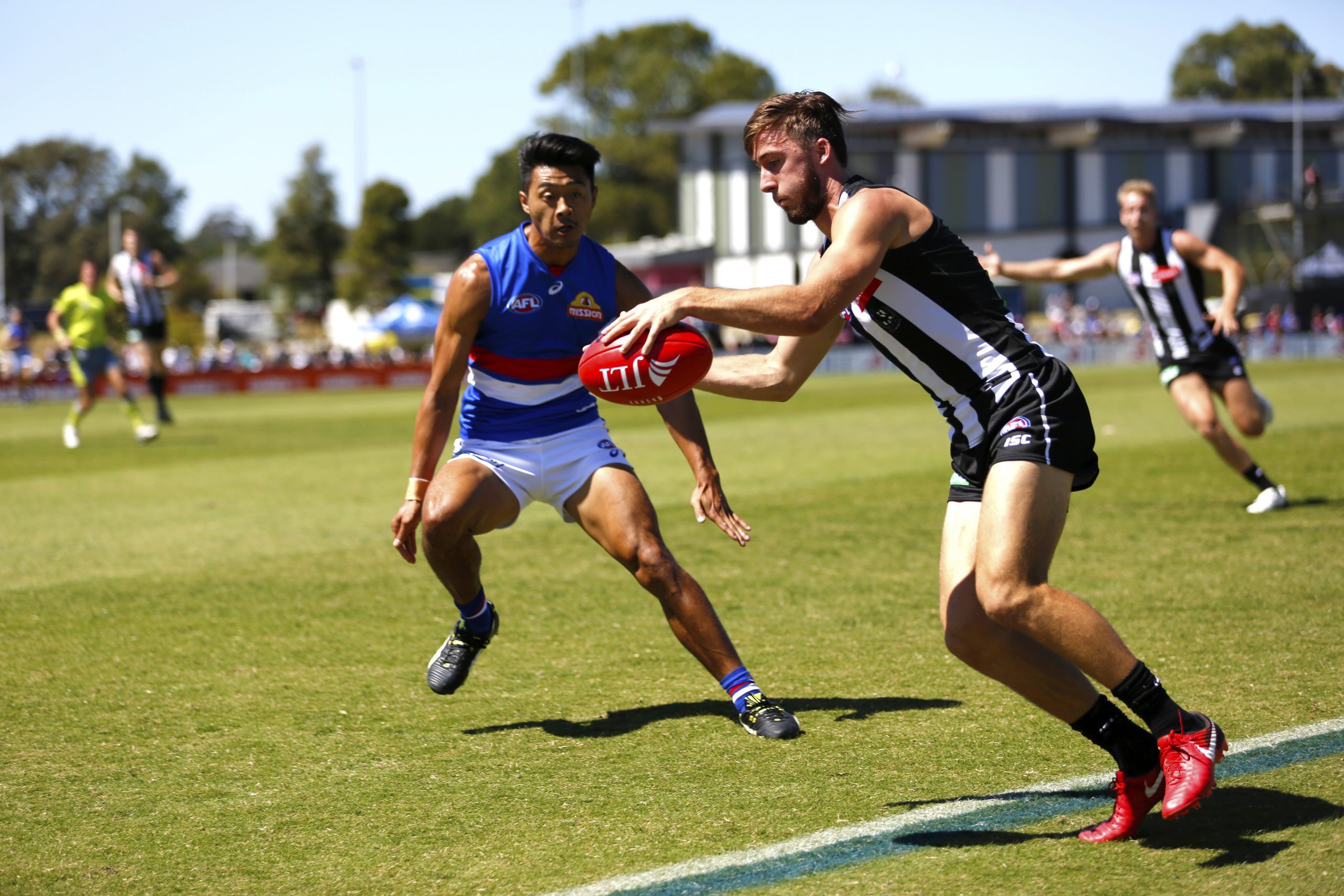 More than 3000 diehard Dogs and Magpies fans flocked to Ted Summerton Reserve in 32-degree heat for a look at their teams in one last full dress rehearsal before the 2018 season begins.

The Dogs were on top early and kicked six goals to one in the first term to lead by 27 points at the first break.

Misfired shots on goal hurt the Pies, who managed just one major from 11 scoring shots in the first quarter.

Collingwood responded in the second and racked up 21 inside-50’s to close the margin to three at the main break.

It was the Magpies’ tall timber that led the way in the second half and coach Nathan Buckley’s decision to play Mason Cox and Brodie Grundy in the same side seemed to pay off.

American import Cox was pushed forward and threw his 212-centimetre frame around with purpose and bagged four goals.

Defender Jeremy Howe returned from injury in classic high-flying fashion with consecutive screamers on the back of Bulldog Marcus Bontempelli and collected 14 possessions.

Steele Sidebottom was among the best for the Magpies in the win with 28 disposals and put the game to bed with a stunning left-foot snap on goal last in the last quarter.

In a huge blow for Collingwood, utility Tyson Goldsack is likely to miss the 2018 season after scans revealed he had damaged his ACL in a seemingly innocuous incident in the first quarter.

Magpies coach Nathan Buckley was pleased with his side’s return to form after a disappointing loss to Greater Western Sydney last week.

“I thought we showed improvement from last week and there were specific improvements that needed to be made after quarter time and we were able to do that,” Buckley said.

“We played the way we wanted to for the most part of the day … it was good to be able to maintain some fluency in our movement.”

With the experiment to play Grundy and Cox in the same side seemingly paying dividends, Buckley said the latter was making all the right moves.

“Last year Cox took some steps to go from almost gloving [the ball] to taking them, and that was one of the reason’s we’re rapt he decided to stay with us … he will take some confidence out of today,” he said.

“We’ve manipulated our structure around getting him and Brodie [Grundy] in the mix together.”

Collingwood will kick off its 2018 season against Hawthorn at the MCG on March 24 while the Western Bulldogs will face GWS.