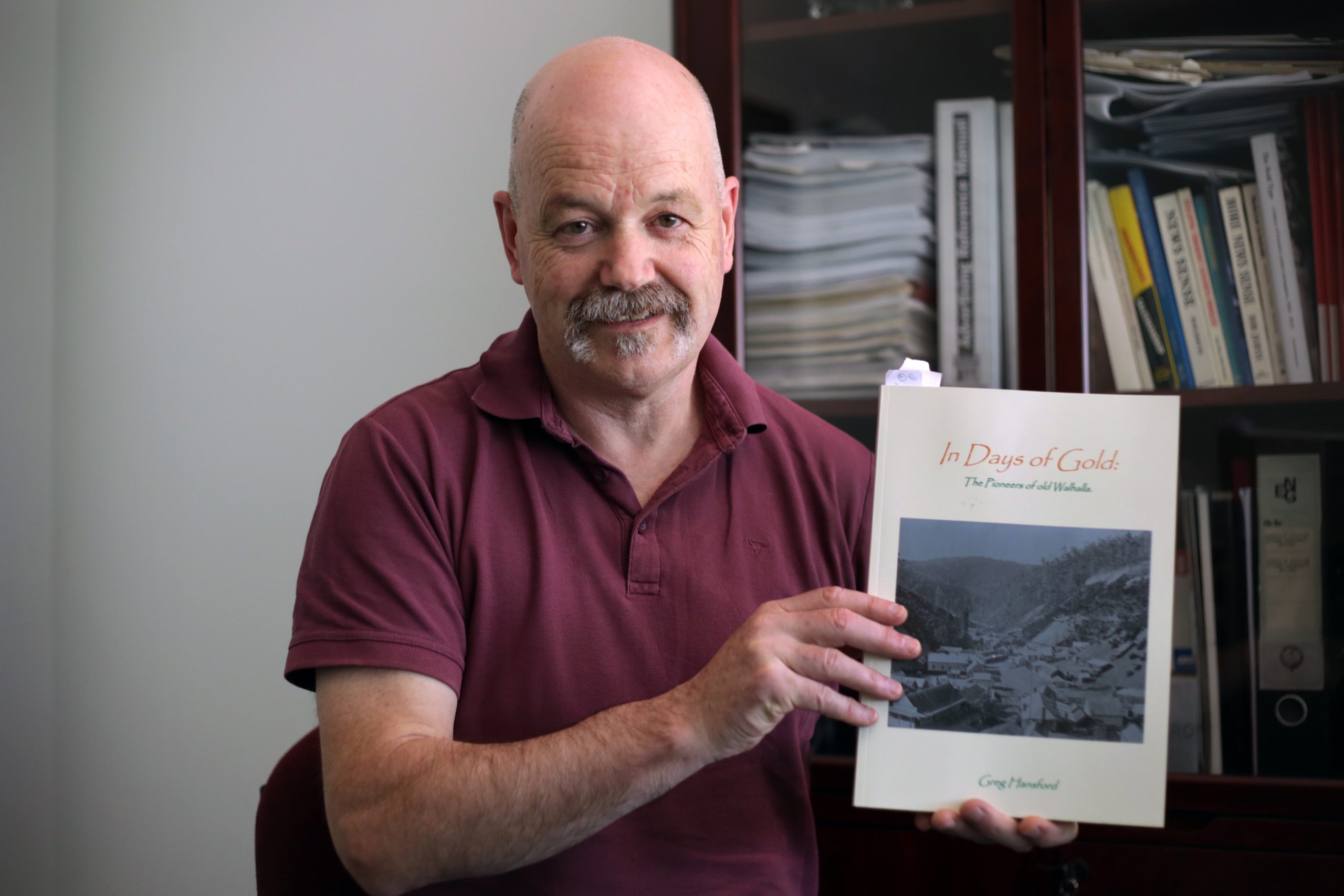 A retired school teacher who started his research before Walhalla was connected to mains electricity is expecting to publish the second book in his trilogy on the township early next year.

Greg Hansford spent years scouring microfilm of old newspapers, reproducing information by hand – then later digitising his records – with seven trips to England in between.

“Now, more and more stuff’s being uploaded onto the internet and I’ve found it seems to be every five years the amount of information sort of doubles,” Mr Hansford said.

He now has a comprehensive searchable database on Walhalla.

The first book released early 2018, In Days of Gold: The Pioneers of old Walhalla, introduces four key characters on the hunt for gold.

He describes them as “bad boys that came good”.

Edward ‘Ned’ Stringer, who served his time in Van Diemen’s Land, made his way to Victoria in 1851 to find his fortune and met William McGregor at Fulton’s Creek, a “wild place” compared to a more “orderly” Walhalla.

McGregor was the only one of the four who came to Australia of his own freewill, as he was escaping persecution in Scotland for sharing the surname of another McGregor who killed the king’s groundsman.

“The McGregors were sort of forced underground and they took a lot of the land away from them,” Mr Hansford said.

The men found a small amount of gold at what is now Coopers Creek, near where the rail bridge crosses over the Thomson River.

They returned to Fultons Creek for food, but Stringer brought with him a little matchbox full of gold and showed some fellow drinkers, who were also thirsty for a small fortune.

“In those days people always hung around pubs keeping an ear out for someone, some little miner that might come in a bit bedraggled, with a little bit of gold and in a bit of a hurry,” Mr Hansford said.

A group of up to 20 men followed him back to Stringers Creek.

A few months later, after neglecting tuberculosis, Stringer visited a doctor in Sale, then died at Toongabbie where he is buried.

“McGregor died a pauper. He made a fortune and lost a fortune in the mines … It’s like the stock market. You don’t put all your eggs in the one basket,” Mr Hansford said.

Mr Hansford suspects the other convict, William Griffiths, found his fortune then left Australia as his records disappear in about 1878.

“Griffiths was the hardest one to track down,” he said.

“He was the one that took me so long to bring out the book because I wanted to find out definitively what happened to him and I couldn’t. I found evidence that he had returned to England.”

Another “remarkable” character featured in the book is Agnes Buntine from Toongabbie, a Scottish-born bullocky who brought the first wagonload of goods into Walhalla when starvation was a real threat in the dense mountains.

“She looked like she could take care of business,” Mr Hansford said.