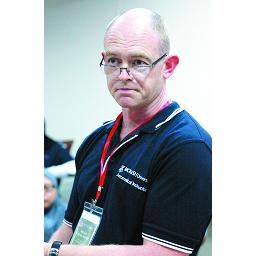 Highly regarded for his efforts in advancing pre-hospital emergency care, Mr Roder said he was “incredibly humbled” because it was “the people I admire the most, my colleagues” that had nominated him for the award.

“I work with some exceptionally talented, bright and motivated people.

“To have them nominate me is quite an honour, so I was quite taken aback – it was a very surprising moment and also very overwhelming.”

Having started his career with the metropolitan ambulance service in 1991, Mr Roder progressed through the ranks and, after completing his training, became a MICA flight paramedic in 2002 and began working in the Latrobe Valley.

Drawing on his experience, Mr Roder worked extensively with a group in Borneo to establish retrieval – or patient transport – processes on the island.

“It is a very unregulated medical system over there,” Mr Roder said.

“We are very blessed here in Victoria with the various medical systems we have. If you have a heart attack, a car accident or a stroke, there are well-defined systems of practice within Victoria. Borneo … saw ours and said ‘we’ll have that’.”

Mr Roder is also highly regarded for having developed a widely distributed training package related to retrieval medicine. Describing the training package as working to “remove the intimidation” newly-trained flight paramedics may experience when they step into a hospital”, which is “not our environment”, Mr Roder said the information in the package had largely been compiled as a result of his own personal practice and research.

“Along the way, through personal experience, I was independently trying to develop my own craft and, through research, I developed a guide to critical care transfer which is used as a resource now, particularly for those developing their abilities in a new field,” he said.