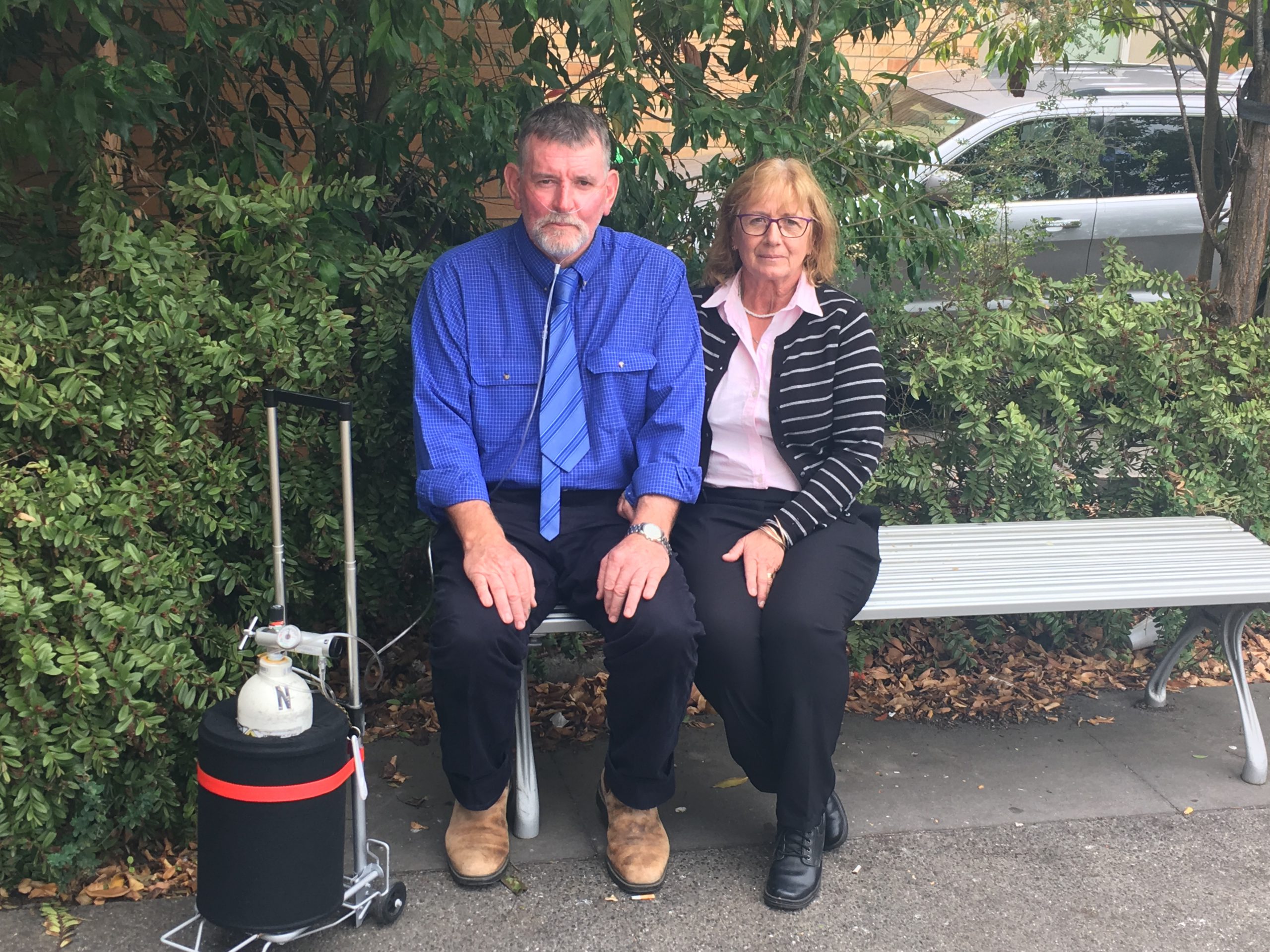 An excavator operator who worked on the Hazelwood mine fire has detailed the “excruciating” pain he lives with on a daily basis since developing two life-threatening conditions months after the fire was extinguished, the Latrobe Valley Magistrates’ Court has heard.

Extreme heat, poor visibility and smoky and dusty conditions which would leave Moondarra man David Briggs’ clothes “almost black” after he clocked off each shift are the lasting memories of his time as an earthworks operator during the 2014 blaze.

Mr Briggs, 59, worked in the mine during the fire which burnt for 45 days – and blanketed the Latrobe Valley in smoke – and was initially required to dig out burning coal, called hotspots, to stockpile so the fire could be more easily managed.

Less than six months after finishing his employment at Hazelwood, Mr Briggs developed “flu-like” symptoms which would later be diagnosed as an interstitial lung disease associated with an autoimmune condition called amyopathic dermatomyositis.

His employer at the time, RTL Mining and Earthworks Pty Ltd, and its insurer, have previously refused a WorkCover claim since Mr Briggs was diagnosed with the illness in 2015, a WorkCover hearing at the Morwell court has heard.

Mr Briggs, who is represented by Maurice Blackburn lawyers, claimed in court he was not offered breathing apparatus during the mine fire, nor were the excavators fitted with any kind of air extraction equipment.

“They had no special equipment to pressurise the cabin, of course you would always operate with the airconditioning on … because of the extreme heat,” Mr Briggs, who uses an oxygen tank, said.

“We were quite diligent with our other personal protective equipment but [breathing equipment] was never provided.”

In the months leading up to January 2015, Mr Briggs developed “flu-like symptoms, aching, general feeling of tiredness and breathlessness,” his barrister, Nick Horner, told the court.

After ceasing work, he flew to Sydney to see a family doctor before spending five weeks in St George’s Hospital after being admitted to acute emergency.

Mr Briggs, an experienced operator who worked on projects including the Thomson Dam, Yallourn Power Station, Western Ring Road, desalination plant at Wonthaggi and a three-year contract at Hong Kong Airport, told the court he was “no longer considered an appropriate candidate” for a lung transplant due to his rapidly deteriorating health.

In a medical report tendered to the court, The Alfred hospital respiratory and sleep medicine physician Dr Kovi Levin stated Mr Briggs experienced “exertional breathlessness and significant fatigue” and acknowledged the plaintiff would likely never return to work due to his illness.

During evidence, Dr Kovin said Mr Briggs’ exposure to smoke during the mine fire may have triggered the onset of interstitial lung disease, however, that was only an “assumption”, defence barrister Stephen Scully told the court.

“In my opinion, given the temporal relationship between Mr Briggs’ employment and the development of his symptoms, as well as the incongruous findings on lung biopsy specimen, this hypothesis is reasonable,” Mr Kovin’s report dated on September 7, 2015 read.

In court, Mr Briggs said his health was “extremely good” before he worked at Hazelwood during the mine fire, adding results from a lung function test on the afternoon he started at Hazelwood were “quite exceptional”.

He also told the court he had never smoked and did not drink, and had lived a health, active lifestyle up until his decline in health.

Mr Briggs worked 12-hour nightshifts for six weeks at the start of the mine fire, which allowed machinery operators to identify the hotspots more easily, he told the court, before he was restored on to work day shifts after the fire in the mine’s batters was brought under control.

The excavators, hired from Delta Rental, weighed between 25 to 35 tonnes and were used to dig hotspots as deep as 12 to 15 metres and up to 100 metres in length.

In some cases it could take up to three nights to dig out one hotspot, Mr Briggs told the court.

“On nightshift the smoke was quite extreme, and the dust if there was no wind to move the dust and smoke away â(e)¦ would just linger there all throughout the night and that was quite common,” Mr Briggs said.

“Particularly the really fine dust would enter in the cabin constantly. You could notice it on the control panel of the machine, on the floor of the cabin and even on my clothing and arm rests of the machine.”

Magistrate Simon Garnett added, “And a lot of this dust obviously covered this court, a lot of houses and the township of Morwell.”

Since his diagnosis, Mr Briggs, supported in court by his partner Penny, said his health had been deteriorating “a lot quicker than expected”.