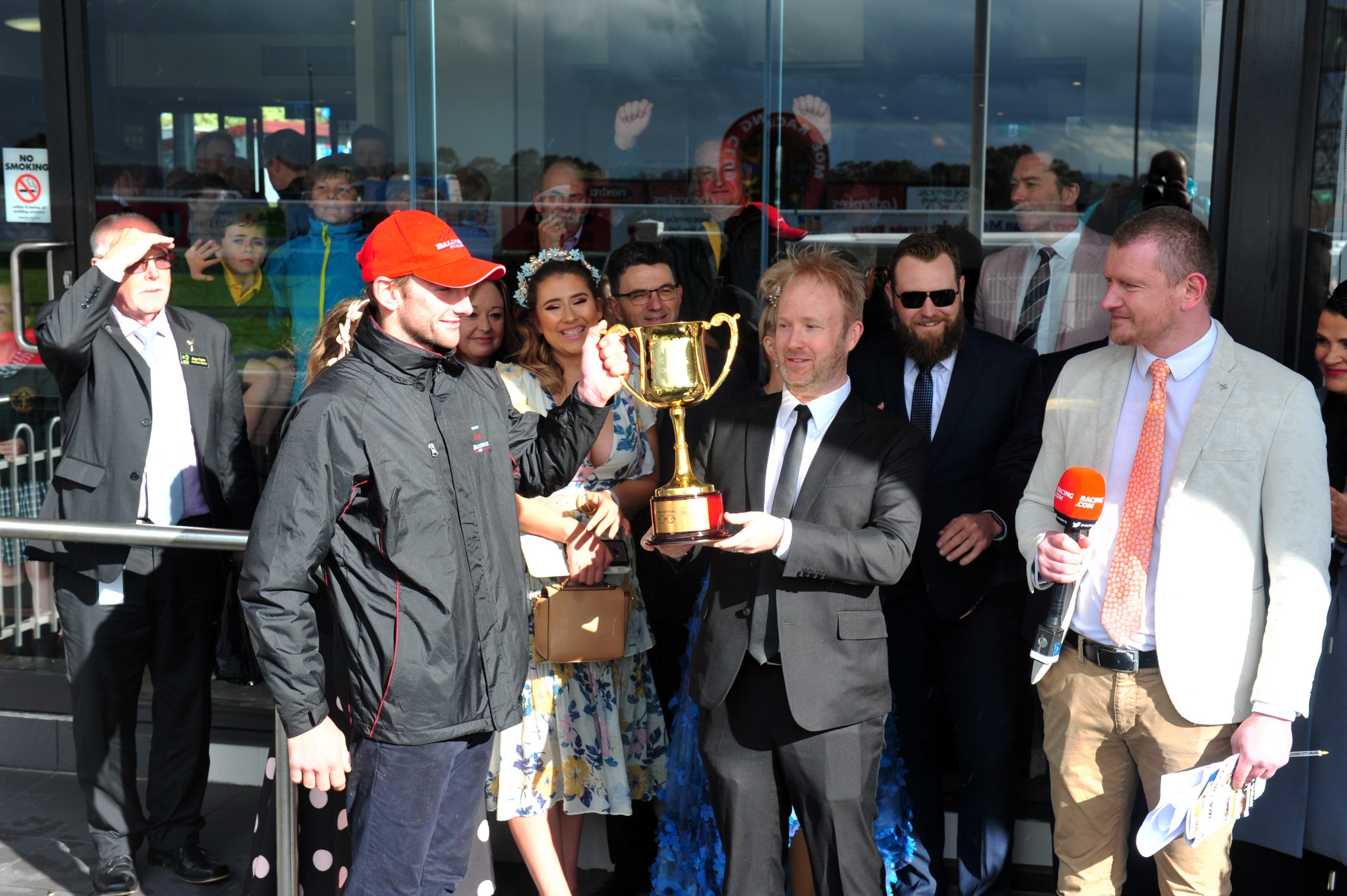 Punters could be forgiven for thinking they had purchased a ticket for Gumbuya World with wet and wild weather an unwelcomed guest for Thursday’s Moe Cup Day.

The dreary conditions delivered a massive hit on the crowd and were combined with a power outage, which delayed proceedings by nearly an hour, leading to genuine fears the showpiece race wouldn’t be run.

Thankfully, racegoers were eventually able to witness the race which stops the Latrobe Valley with the Mike Moroney-trained Gundown storming home to edge out Annarbor and Mr Clarify to win the $150,000 Moe Optical Cup.

Away from the track, revelers made the most of the marquees while the Fashions on the Field proved a success with Emma Scodellaro and Ben Carbonaro taking out the prized sash in the best dressed lady and gentleman categories respectively.

Classic Australian band 1927 rounded out the lively day with a concert on the lawns in what was the driest period of the day and Moe Racing Club chief executive officer Shane Berry was happy the event finished on a positive note.

“I had really high hopes for the day, but the weather threw everything at us,” Mr Berry said.

“It really ripped out hearts out, but we got through the day.

“It was great we were able to come home strong with the 1927 concert and it was a dry concert at that.”

Mr Berry admitted the crowd fell short of the figure he was hoping for, with numbers clearly impacted by the conditions.

“I know what we sold with our packages and general attendance was definitely down because it was raining. I think we would be lucky to have got 2500,” he said.

The Moe Cup has had a chequered recent history with the meeting abandoned on three occasions this decade due to track woes.

But that was not an issue in 2019, with Mr Berry saying the surface held up well despite the downgrade from a soft to a heavy track due to the rainfall, although the power outage did delay the running of the Cup from its original 4pm time to 4.50pm.

“I don’t think the track struggled (with the rain),” Mr Berry said.

“All race tracks get chopped up on the inside if they always run in that area, but we saw in the Moe Cup itself, with the rain pouring down, we were able to have a blanket finish.

“The power outage is still under investigation, we had to run power leads and we don’t know what it was.

“It was only out at the far end of the track, into the stewards’ room, we lost all the upstairs committee and function rooms and we can’t put a finger on the issue yet.”

Given the hectic nature of this year’s Moe Cup, you could forgive Mr Berry for wanting to take 2020 off, however, he is confident brighter days are around the corner for the region’s premier race meeting.

“It is a privilege to be a part of this club and hopefully I am going to be here for a few more years,” he said.

“This is a progressive club and we have big plans on the cards, we just want people to get behind Moe.

“The people that came will be walking home with a smile on their face, we will be sure to make it bigger and better next year.” Veteran bookmaker Fred Watts was able to quantify how much impact the weather had on the sodden Cup day.

“A lot of the other (bookmakers) have been commenting how it hasn’t been as busy as other years,” Mr Watts said.

“We work most of the meetings and I have been coming here for 20 years, maybe more.

While the total bets were down, the Frankston-based bookie was content to be heading home in a winning way.

“It was a winning day in the end even though it wasn’t as busy as normal,” he said.

“Gundown was a good price, we laid it and we probably broke even on the race.”

Moe Racecourse is back in action on November 10 when it hosts Festival Race Day before two more meets before year’s end.