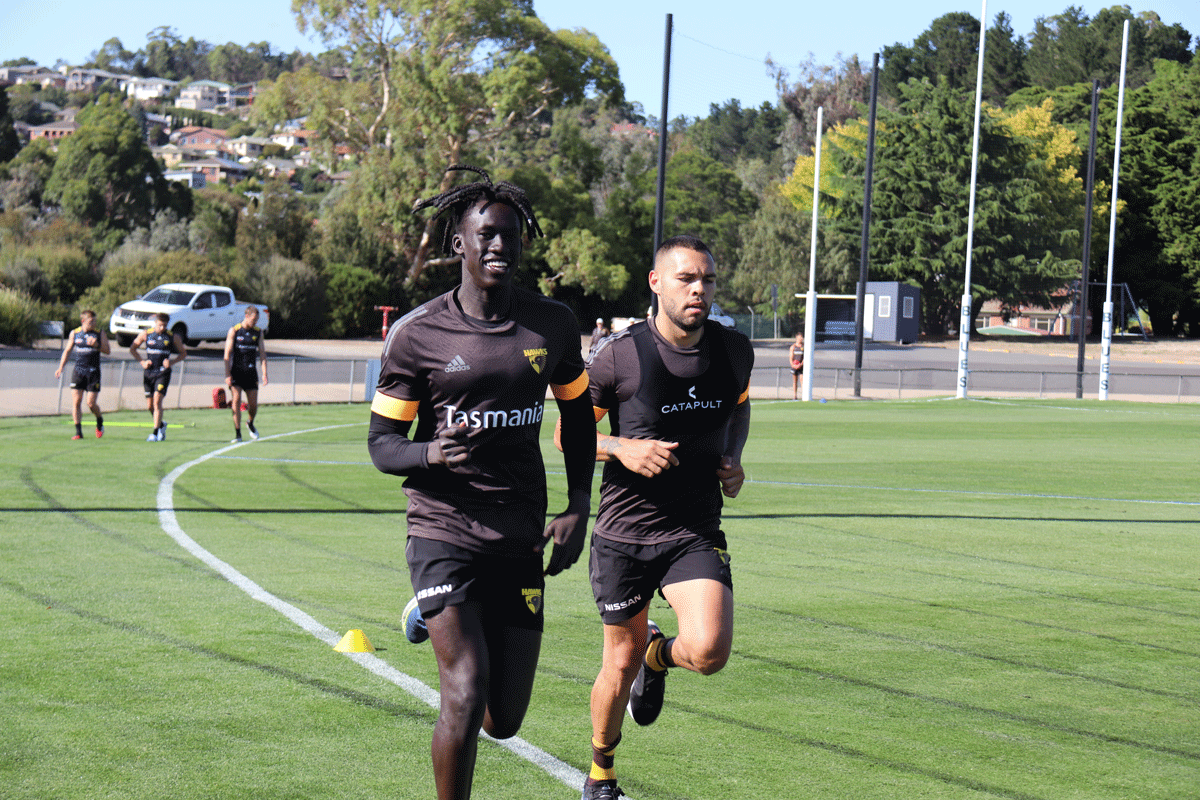 Changkuoth Jiath remembers the first game of football he ever played at Morwell Recreation Reserve.

“I was playing for Morwell Youth Club and we had the bye,” Jiath told The Express.

“So they asked a few of us who were 13 or 14 at the time to go up and play fourths for Morwell Tigers.

“It was a pretty special experience at the time.”

Fast forward seven years and Jiath is a Hawthorn player who is looking forward to the opportunity to grace his home turf in tomorrow’s Emergency Services match against St Kilda.

The 188cm defender, who made his AFL debut in Round 21 last year, said he had an extra spring in his step in the build-up to the match.

“I’m very excited about the chance to play in front of my friends and family,” he said.

“It will be good to see a lot of familiar faces, especially those from the Morwell Tigers Football Club, the players, the staff, the canteen volunteers.”

Jiath, 20, said he is aiming to build on the momentum generated by that top-flight breakthrough in 2019, playing two AFL games.

“I’ve had a pretty strong pre-season with no injuries,” he said.

“The coaches have been pretty happy with how I’ve been going. I’m keen to cement myself in the senior team and play consistent football.”

Jiath, who played at Gippsland Power and Xavier College before being selected by the Hawks as a Category B rookie in 2017, said he was enjoying life as a Hawthorn player.

“I’m grateful to have come to a club that has had so much success during the past 10 years or so,” he said.

Jiath said the Hawks would bring a quality side to the Latrobe Valley, although James Sicily, Luke Breust and Isaac Smith are playing in the representative match between Victoria and the All-Stars.

“This game is about honouring the contribution of those great people in our emergency services,” he said.

“It means a lot for Hawthorn to be supporting our firefighters and hopefully we can put on a great show for the people of Gippsland.”

Hawthorn and St Kilda will square-off from 4.30pm after a curtain-raiser featuring the Hawks’ Next Generation Academy at 2pm.

The BankVic Emergency Services Fan Zone will be a popular spot for many youngsters, while people are being encouraged to stick around after the main event and watch the Victoria/All Stars match on the big screen.

Big screens will be located on the live site to watch the AFL State of Origin Match.

Feel free to bring along picnic rugs or small chairs and settle in for a good night.