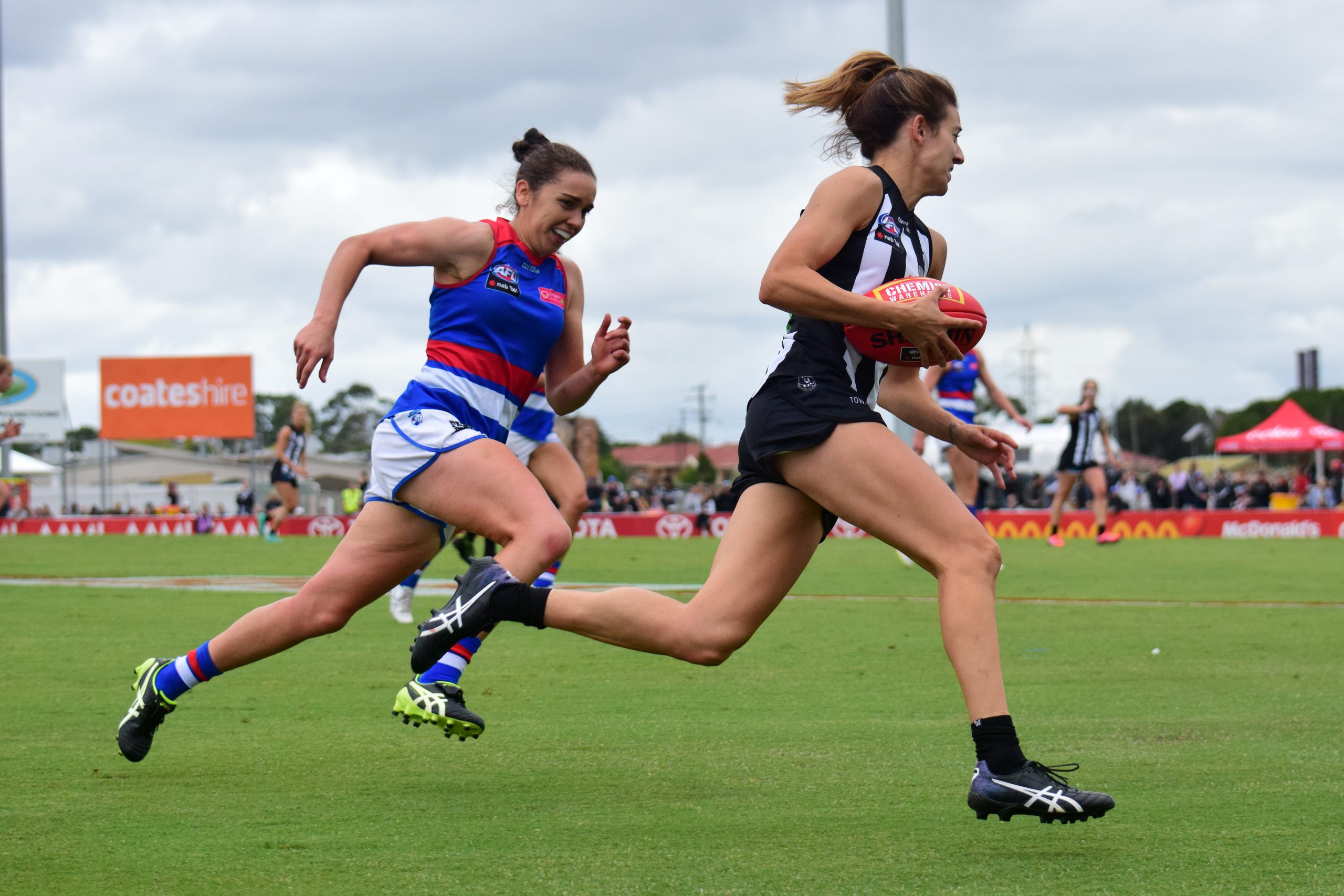 Collingwood barely missed a beat yesterday, reversing recent fortunes to record a commanding 32-point win over the Western Bulldogs in front of a healthy crowd at Morwell Recreation Reserve.

The victory catapults the Pies back into finals contention after consecutive losses saw them drop out of the Conference B top three.

With the aid of the breeze they piled on three goals to none in the first term, two of which came courtesy of a menacing Chloe Molloy, to head into quarter-time with a 17-point lead.

Coach Steve Symonds made the call to swing the Rising Star forward for yesterday’s game and it paid off, as Molloy (three goals) helped the Pies pull 30 points clear midway through the third term on the way to a 8.5 (53) to 3.3 (21) win.

“It’s exciting when you kick a goal, I think it’s exciting because it’s kind of a team effort and it’s just putting the cherry on top for the hands that were trying to get it through the middle,” Molloy said.

“I was just fortunate enough to be on the end of them but it was a real collective effort today and we kind of said from the start that we wanted to make a statement to the league.”

Molloy had no shortage of supply courtesy of prolific ball-winner Jaimee Lambert, who cemented her hold on the competition’s Champion Player of the Year Award and shook off a first-half head knock to amass 24 disposals.

“You’ve got obviously Bri (Davey) coming into the midfield with us and it just makes you really want to work hard for your teammates,” Lambert said.

“Not only Bri but Britta (Bonnici) … Chloe (Molloy) when she runs through, so it’s about working hard for the team.”

The Bulldogs, goalless in the first half, enjoyed a brief resurgence early in the third quarter when the pressure work of Kirsten McLeod’s (two goals) resulted in a goal to Kirsty Lamb.

Isabel Huntington was steady in defence for the Dogs while Ellie Blackburn (17 disposals) and Lamb (15 disposals) were also solid.

At their home away from home, Molloy said Morwell was fast becoming somewhat of “lucky charm” for the Pies.

“It’s awesome, we love coming out to Morwell, (we’re actually) undefeated out here,” she said.

“But it’s nice to tie-in with the community they put a lot of support in for us and it just showed today, looking around the whole ground there wasn’t a single empty spot out here.

“It’s really awesome, the facilities are top notch and we really do enjoy travelling out here, a lot of the bus trip can be quite annoying with some of the players but we do really enjoy it.”

Collingwood moves within a game of the Conference B top three with three rounds to play in the season proper while the Bulldogs, with one win, are out of the running.