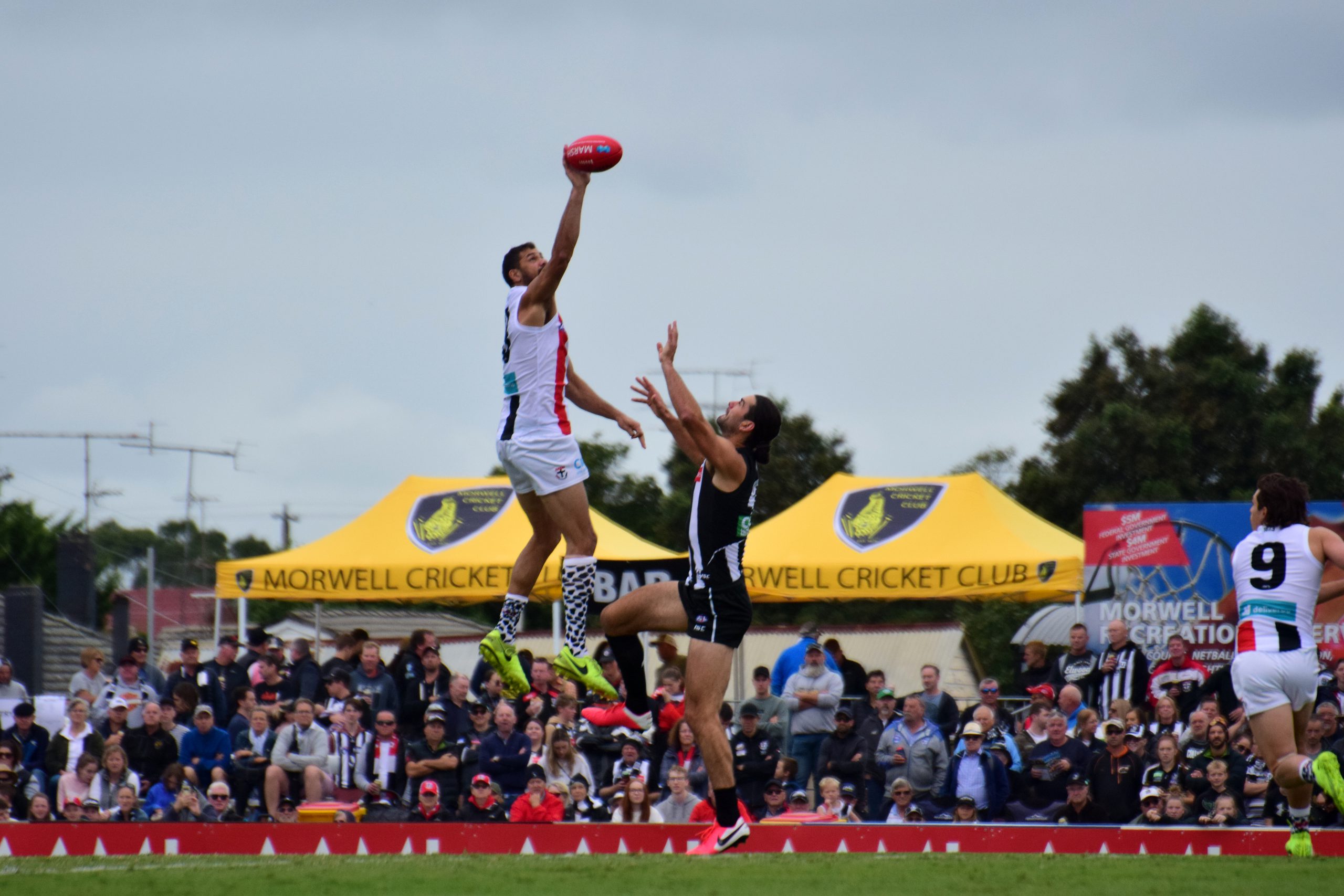 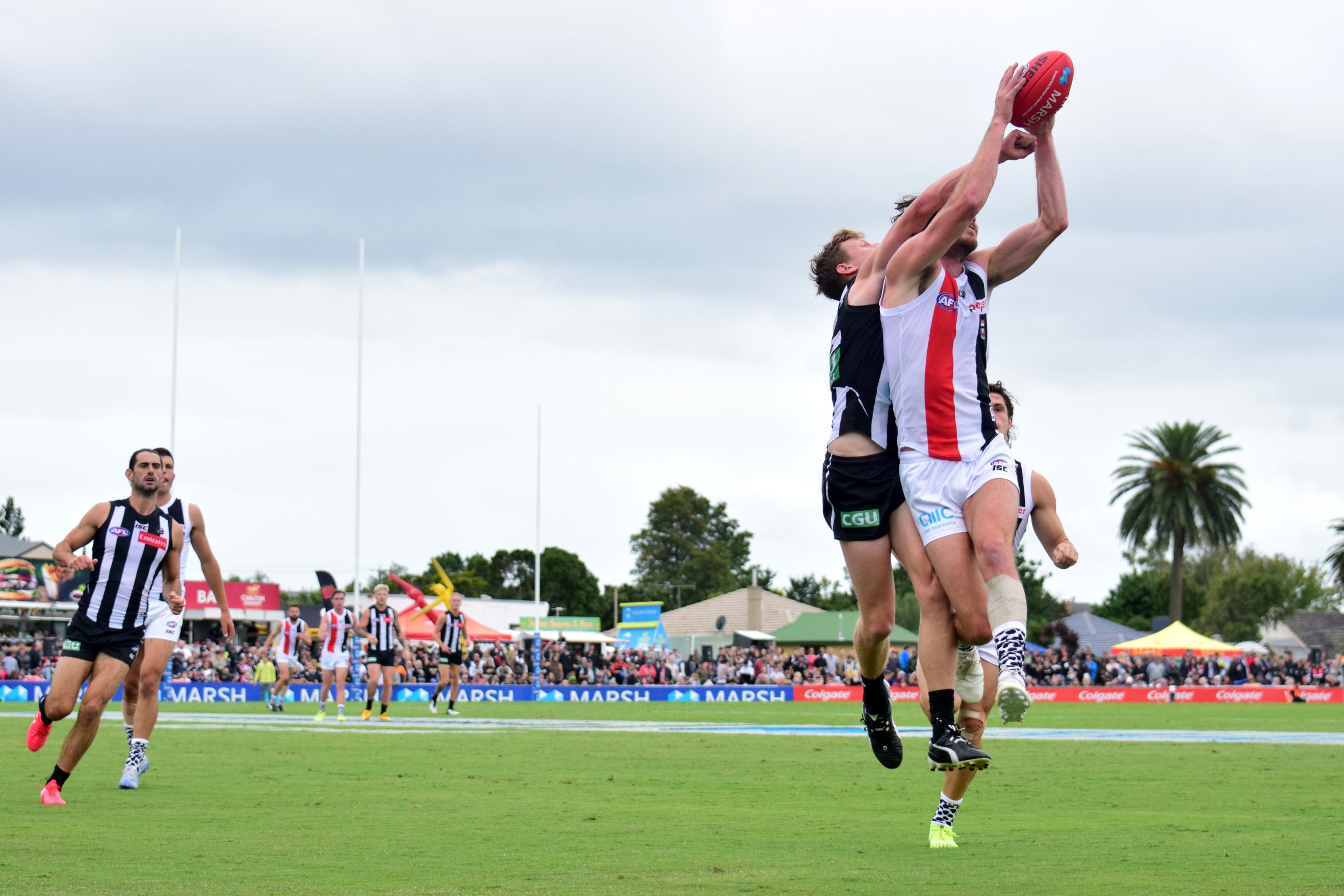 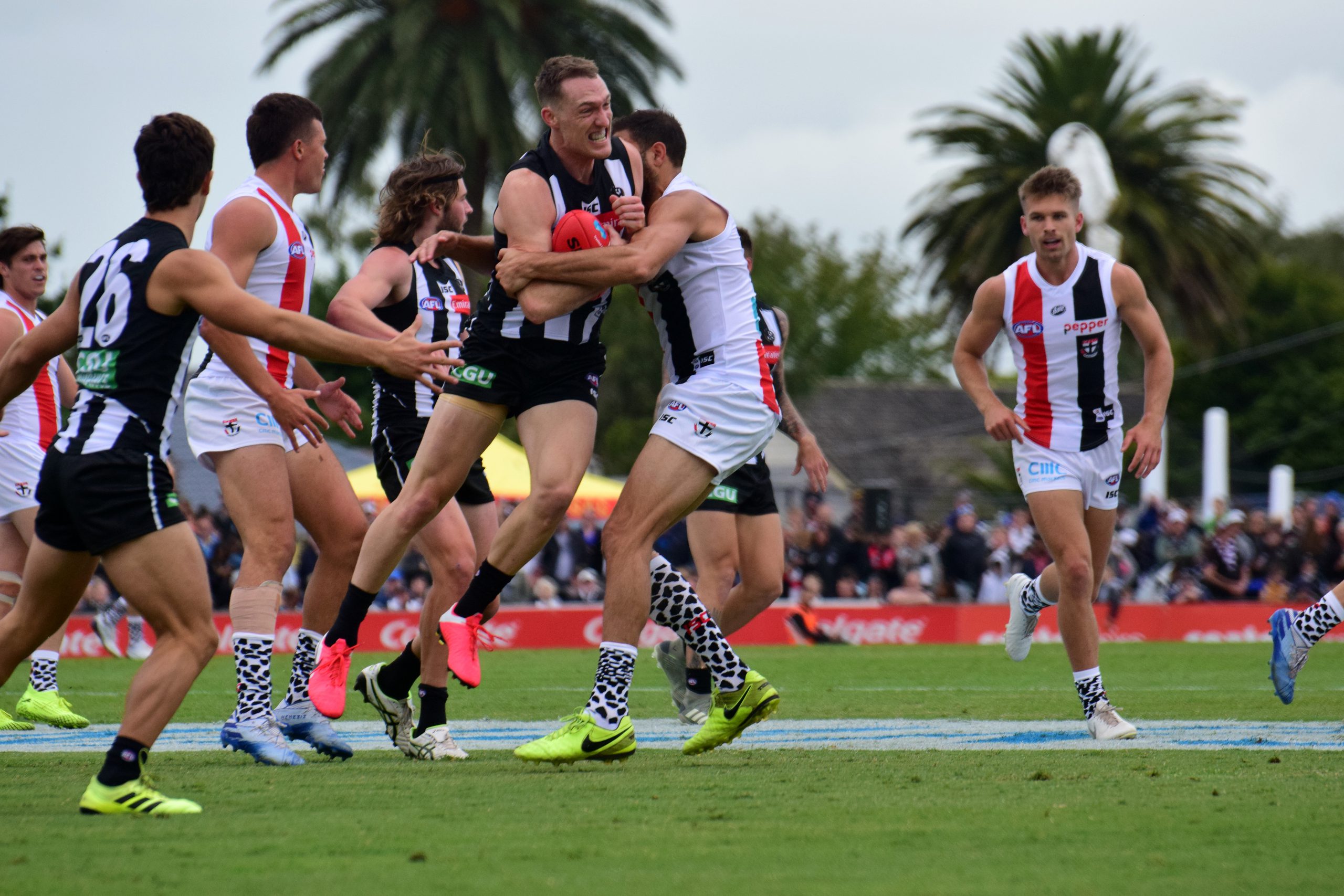 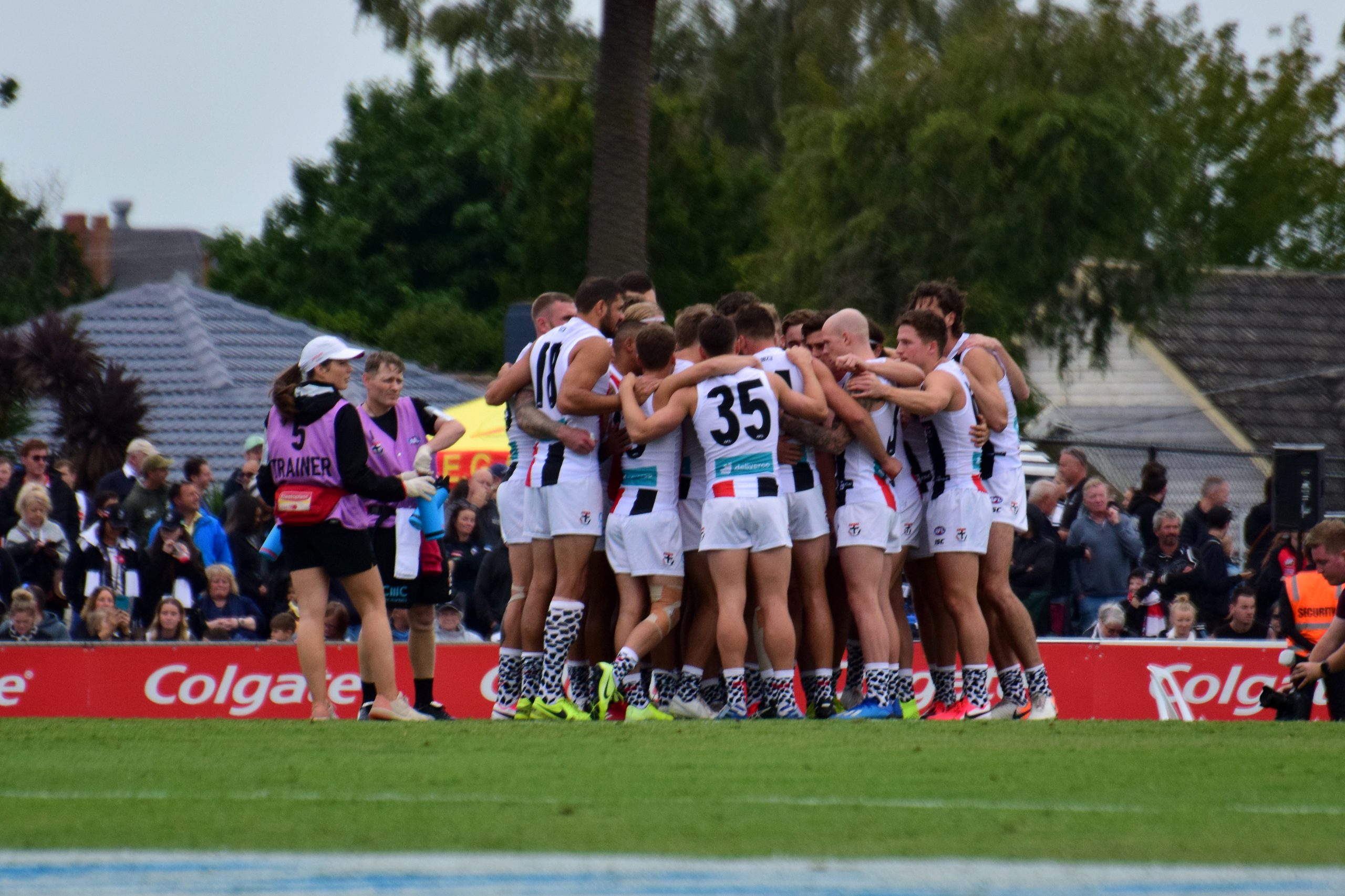 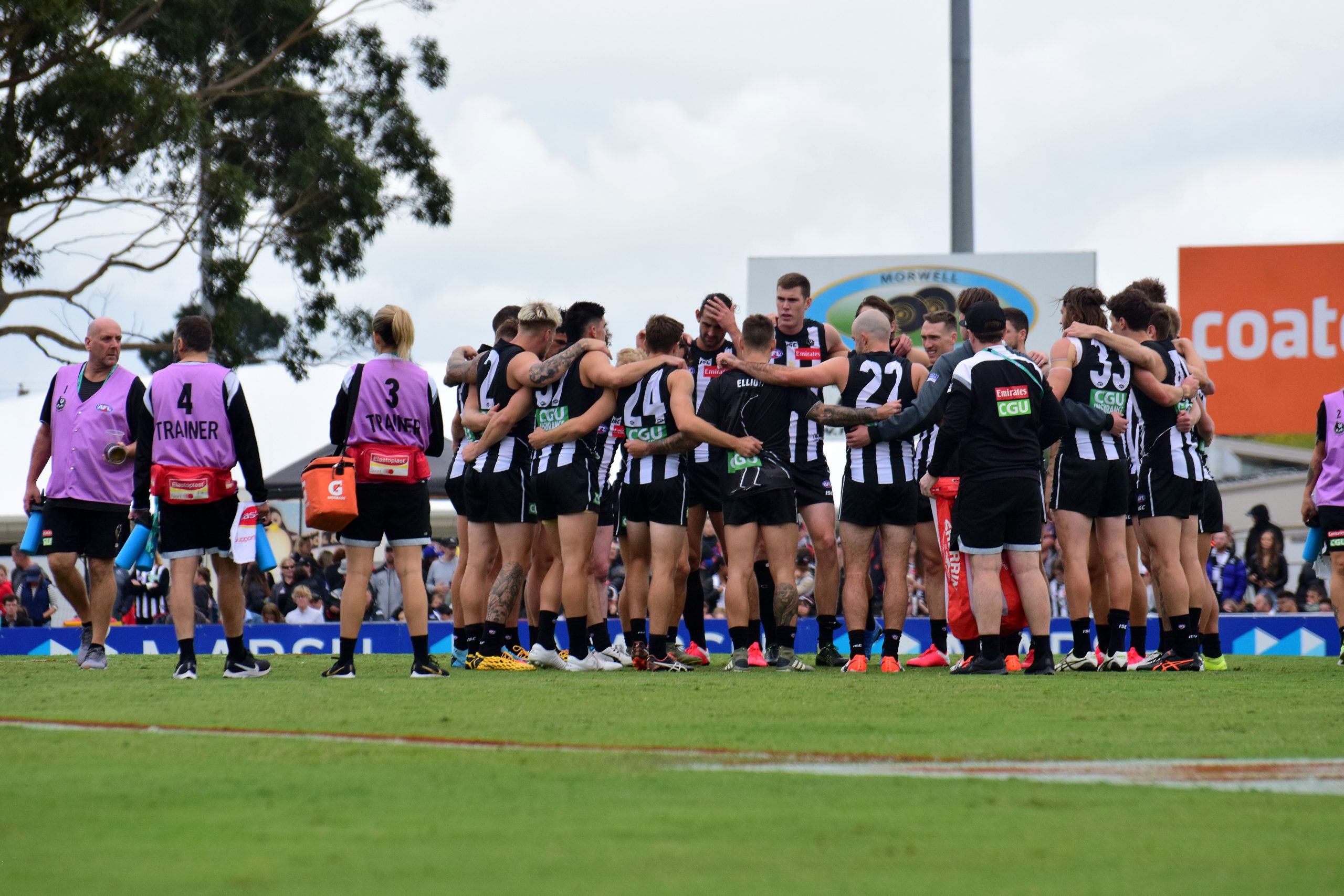 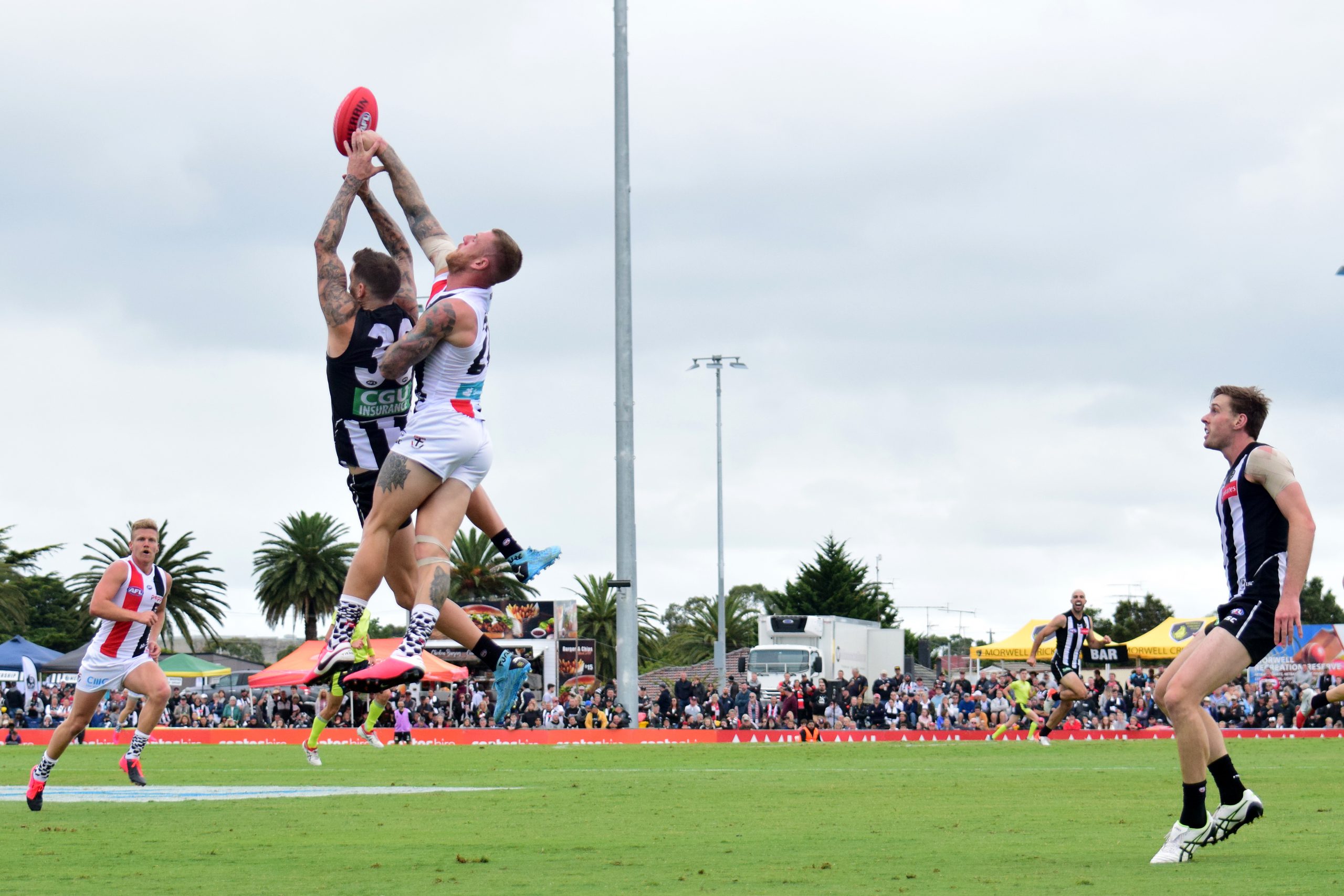 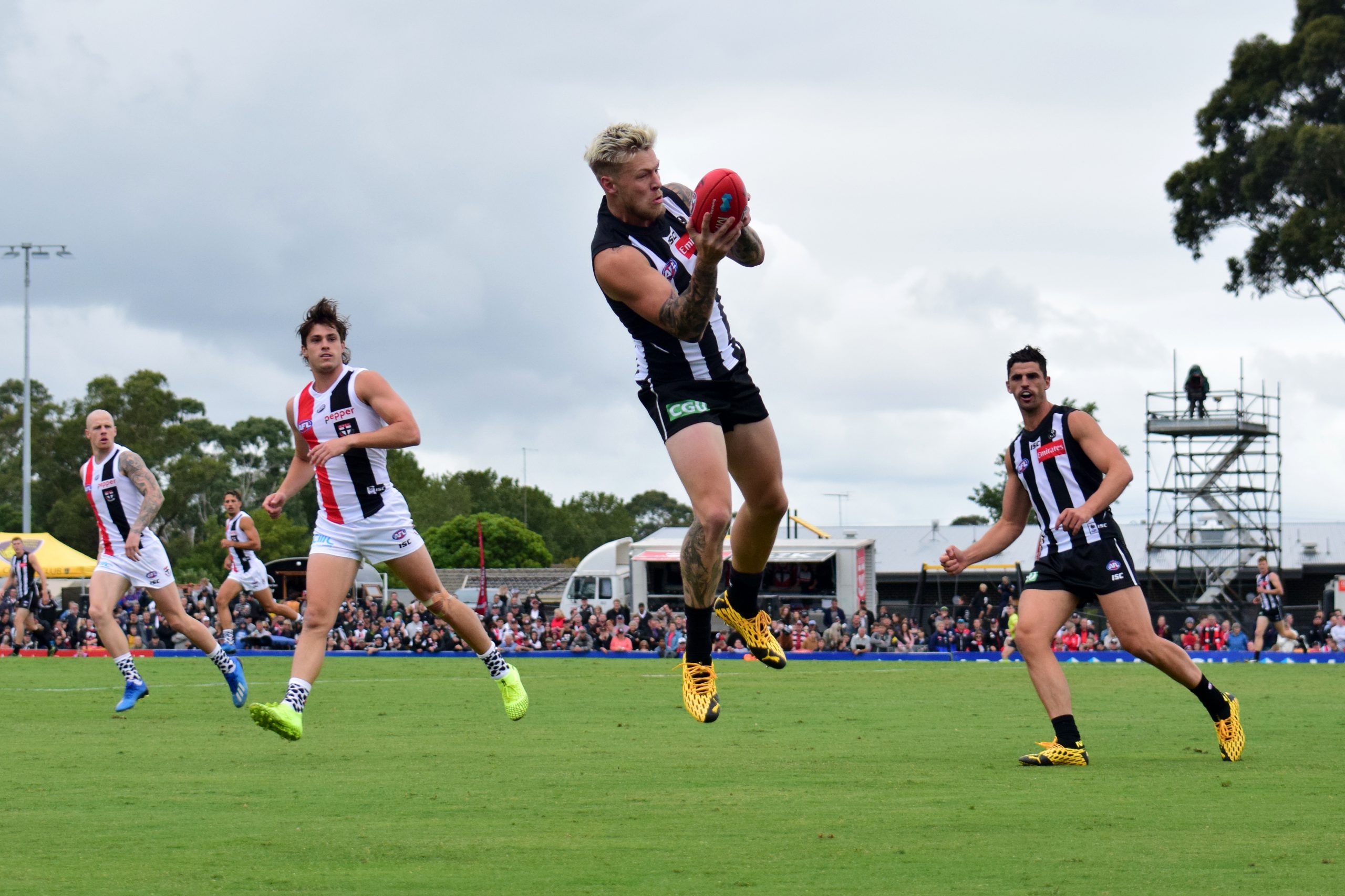 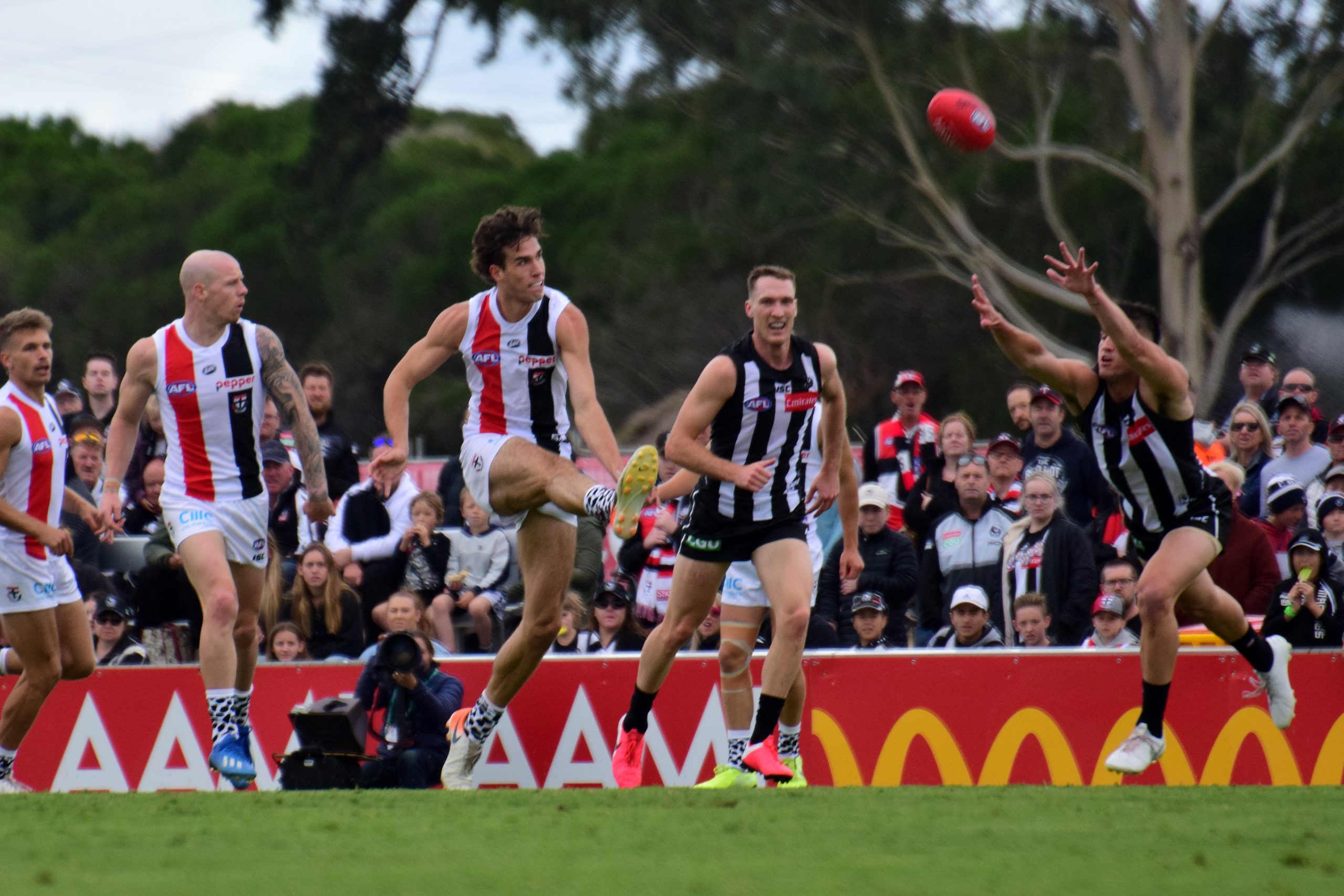 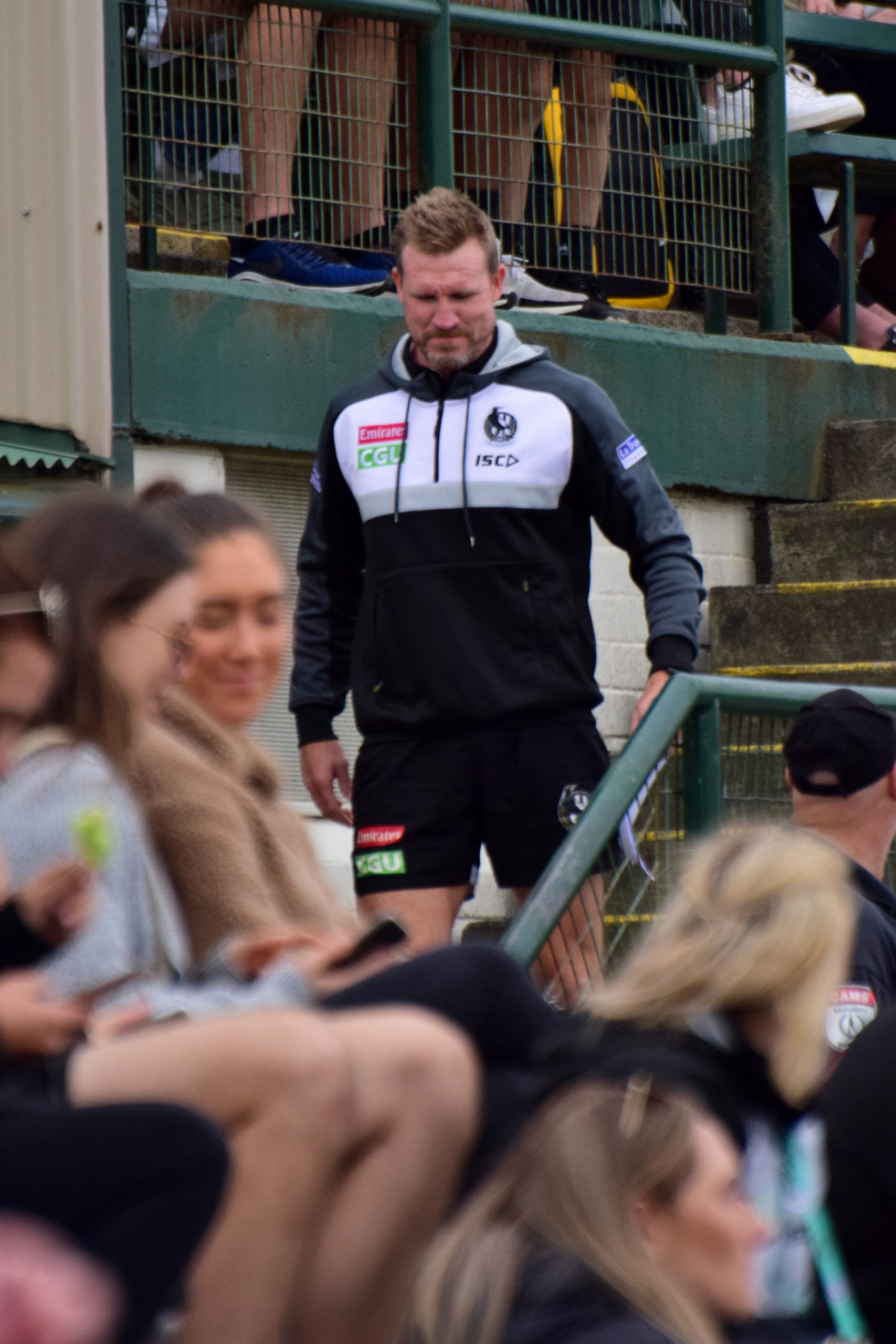 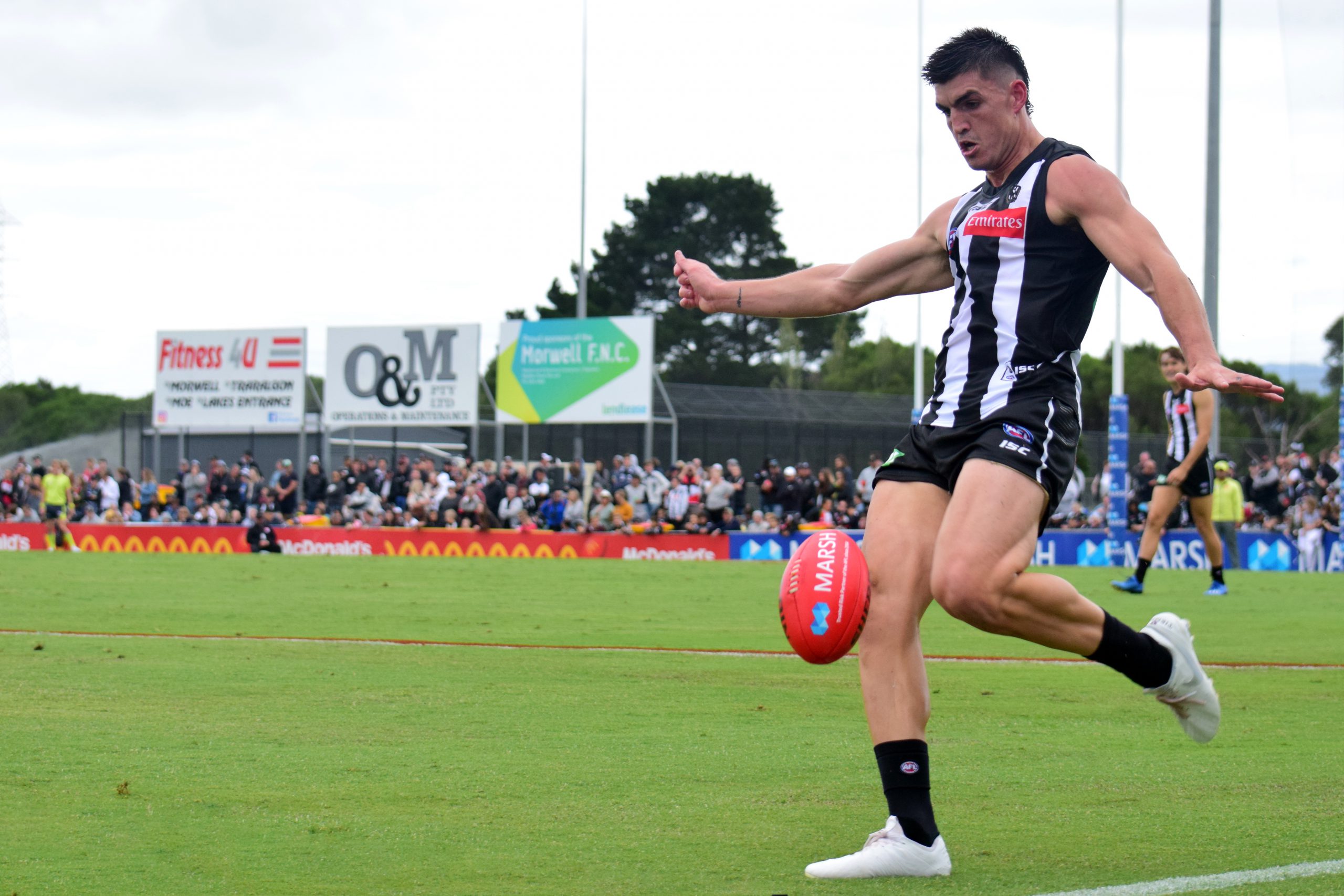 IF the pre-season is any indication, brighter times are in store for St Kilda in 2020.

The new-look Saints made it two wins from as many starts in the Marsh Community Series with a 10.8 (68) to 9.3 (57) win against Collingwood at Morwell Recreation Reserve.

The final margin of 11 points probably flattered the Magpies, who looked somewhat pedestrian after skipper Scott Pendlebury and fellow midfielder Taylor Adams were rested in the second-half.

Small forward Jack Lonie booted four majors, including two in the final term, to seal a confidence-boosting success for the Saints against last year’s preliminary finalists.

New recruit Brad Hill knocked up winning the football, finishing with 28 possessions in a best-on-ground performance.

The wingman played a pivotal role in a number of the Saints’ attacking forays and finished the game as strongly as he started it.

“There were a few errors today, but I thought our pressure was pretty good all day,” Hill said post-match.

“In the second quarter we were overdoing the handballs, so the focus was to get the ball on the boot a bit more and get the footy inside 50 better.”

Hill is certainly loving life at his third AFL club and was ably supported by an industrious midfield performance.

Jack Steele, Jack Billings, Daniel Hannebery and Zak Jones, another fresh face at Moorabbin, all knocked up winning the football.

Their task was made easier after Pendlebury, the leading possession winner on the ground in the first-half and Adams, who appeared to pull up proppy after a push in the back late in the second term, did not return to the field for the third quarter.

Collingwood held a 10-point lead at the main break, but it was an advantage whittled away as the Saints raised their game in the third quarter.

Jeremy Howe and Darcy Moore stood tall under a wave of attacks from St Kilda, although two late goals from Lonie gave the Saints a deserve five-point lead going into the final quarter.

St Kilda skipped out to an 11-point lead when Richmond premiership player Daniel Butler, also in his first year at the club, completed Rowan Marshall’s earlier good work at the seven minute mark.

But Collingwood responded with two goals in as many minutes from the tireless Tom Phillips and Jaidyn Stephenson.

Stephenson, who had a quiet day at the office, threaded the eye of the needle to put the Magpies back in front.

It was a lead Collingwood failed to maintain as a 50-metre penalty conceded by Jack Madgen proved costly, allowing Traralgon export Tim Membrey to convert truly from the top of the square.

Lonie stretched the lead back to 11 points when he slotted his third after winning a debatable free kick.

Steele Sidebottom’s second of the match cut the deficit to five points before that man Lonie bobbed up again to seal the victory with goal number four.

St Kilda’s supporters would have been heartened not just by the win, but the performance of young forward Max King.

He finished with 1.2, but took some telling grabs and worked well alongside Membrey and Josh Battle as tall targets.

Another newcomer, Dougal Howard, was assured across half-back, while Dylan Roberton again impressed and Ben Long’s move to defence is proving a winner.

Long was arguably the best player on the ground in the first half despite the Saints trailing on the scoreboard and finished the match with 24 possessions.

Collingwood was best-served by the high-flying Howe deep in defence and Moore shone until rested by coach Nathan Buckley.

Jordan De Goey played a midfield role and impressed, while Sidebottom’s class was on show in a performance featuring 25 touches and two silky goals.

Crowd: About 4000 at Morwell Recreation Reserve.