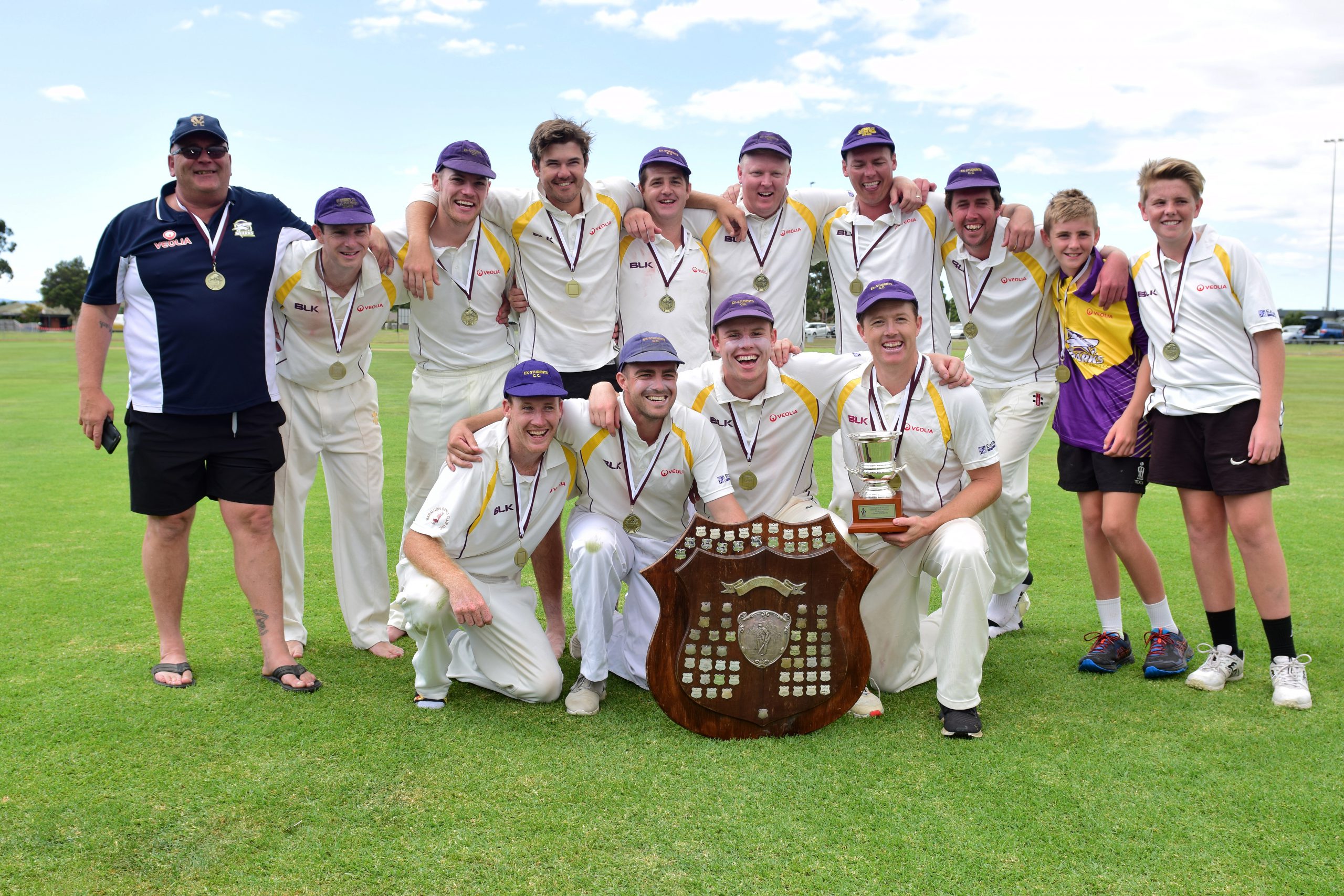 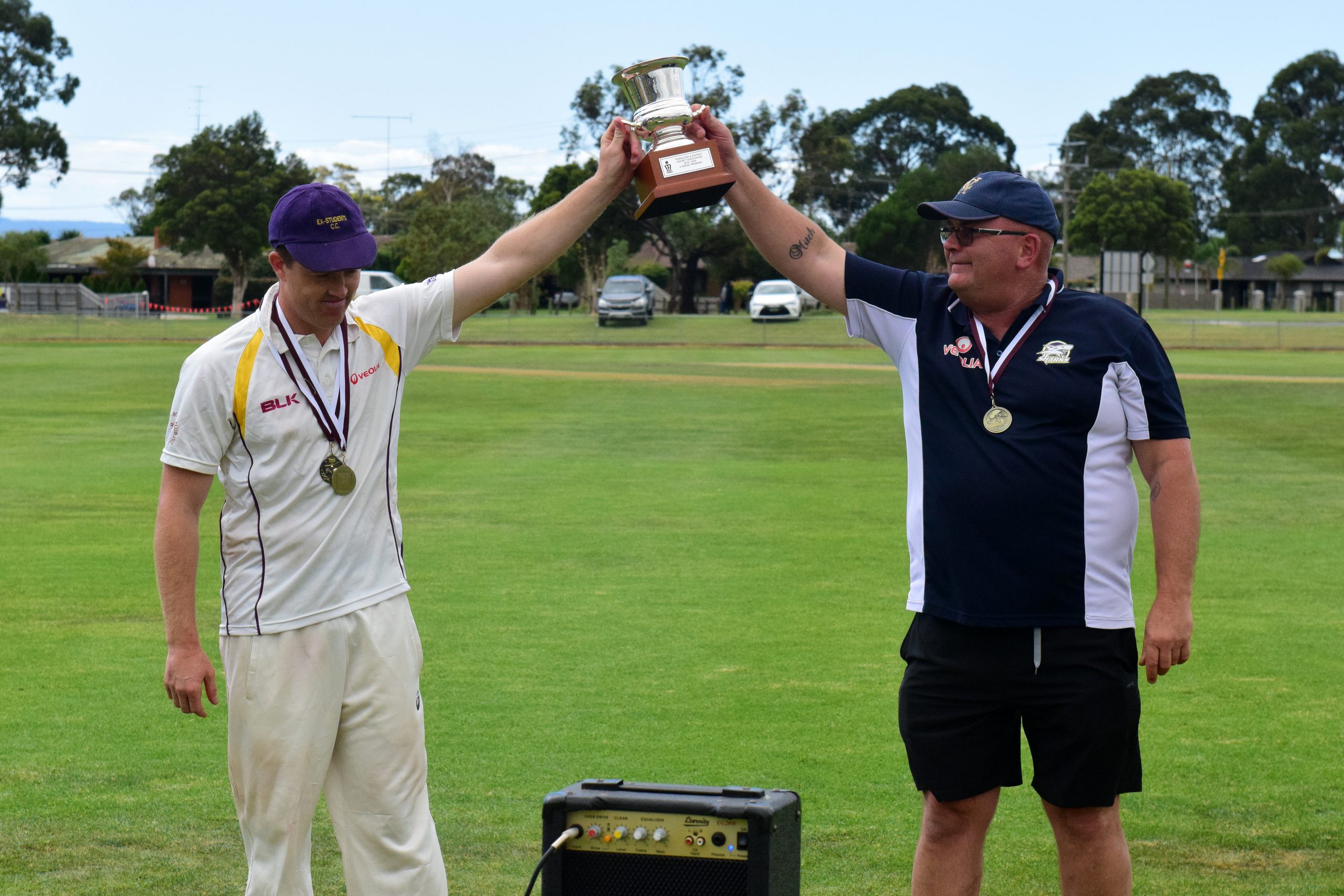 Ex Students are the 2019/20 TDCA A Grade premiers after defeating Toongabbie at the weekend.

As the sun shone on the picturesque Stoddart Oval, Lee Stockdale drew first blood, winning the toss and without hesitation elected to bat.

The Rams needed to fire early with the new ball, but Matt Dyke and Jimmy Pryde had other ideas as they carefully set about occupying the crease for as long as they could.

Pryde was first to go on eight, but with the score on 46.

Dyke showed why he was the recruit of the year with a very well made 46 as the Sharks reached 2/66.

If Toongabbie were to get their teeth into the Students this was the time.

But Jordy Gilmore and Lee Stockdale had other plans as they blunted any Rams hopes of a collapse.

Putting on 67 runs, the two key batsmen were in complete control.

Gilmore with six fours and a six was on fire until he was out for 45.

When the association’s leading runscorer Jackson McMahon went for three, suddenly Toon were back in the game at 4/147.

The Sharks bat very deep and this showed as small partnerships added to the total.

Stockdale just needed his teammates to stay with him as he showed all his class, completely taking the game away from the Rams.

Just on the stroke of tea, Ex Students lost two quick wickets, one the key scalp of Lee Stockdale for a masterful 80.

At 7/214 Toongabbie were right back in the hunt, but with bowlers and fielders tiring the Sharks tail wagged.

Matt Robertson batted beautifully and did a great job scoring 35 not out as Ex Students made a very good 272 of 85 overs.

For the Rams, Keenan Hughes bowled 25 overs for his haul of 4/66 and Aaron Lynch returned the best figures of 4/22 from 13 overs.

With a testing 15 overs to bat Toongabbie had to fight hard. But with the first ball of the innings, Rob Voss produced a peach and TDCA rising star Zac Russell, 16, was caught at first slip for a golden duck.

Rob Wheildon was the key wicket, but after a gruelling 30-minute stay he was out for just four.

Disaster then struck as semi-final hero Michael Dunn, after showing grit for just under an hour, was out for 14, leaving Toongabbie in trouble overnight at 3/21.

Day two started terribly for the Rams when Tim Dunn was caught for two.

Connor Hughes then added 20 runs with Anthony Scott before he was out for eight and the Rams were in deep trouble at 5/49.

At 6/61 with Jason Veneman out for one, Scott was running out of partners and Tom Shippen was the last hope for this game to go deep into day two.

After a 41-run partnership, Shippen, who was batting well, fell for 24 and Toon’s hopes were gone.

Scott showed his class, top-scoring with 64, but the Rams were all out for 123, well short of the target needed.

In a match-winning performance, man-of-the match Lee Stockdale proved why he is the premier cricketer in Gippsland, taking 4/32 from 18 overs to go with his 80.

Fittingly it was Stockdale who hoisted the trophy aloft with Ex Students president Greg Membrey, much to the delight of the Sharks faithful.

But the bowling effort was far from a one-match show as the Ex Students attack all contributed to the cause.

So it was Students successful by 149 runs in a result that capped an impressive season and offered some redemption after the events of 12 months earlier when Toongabbie claimed the crown.