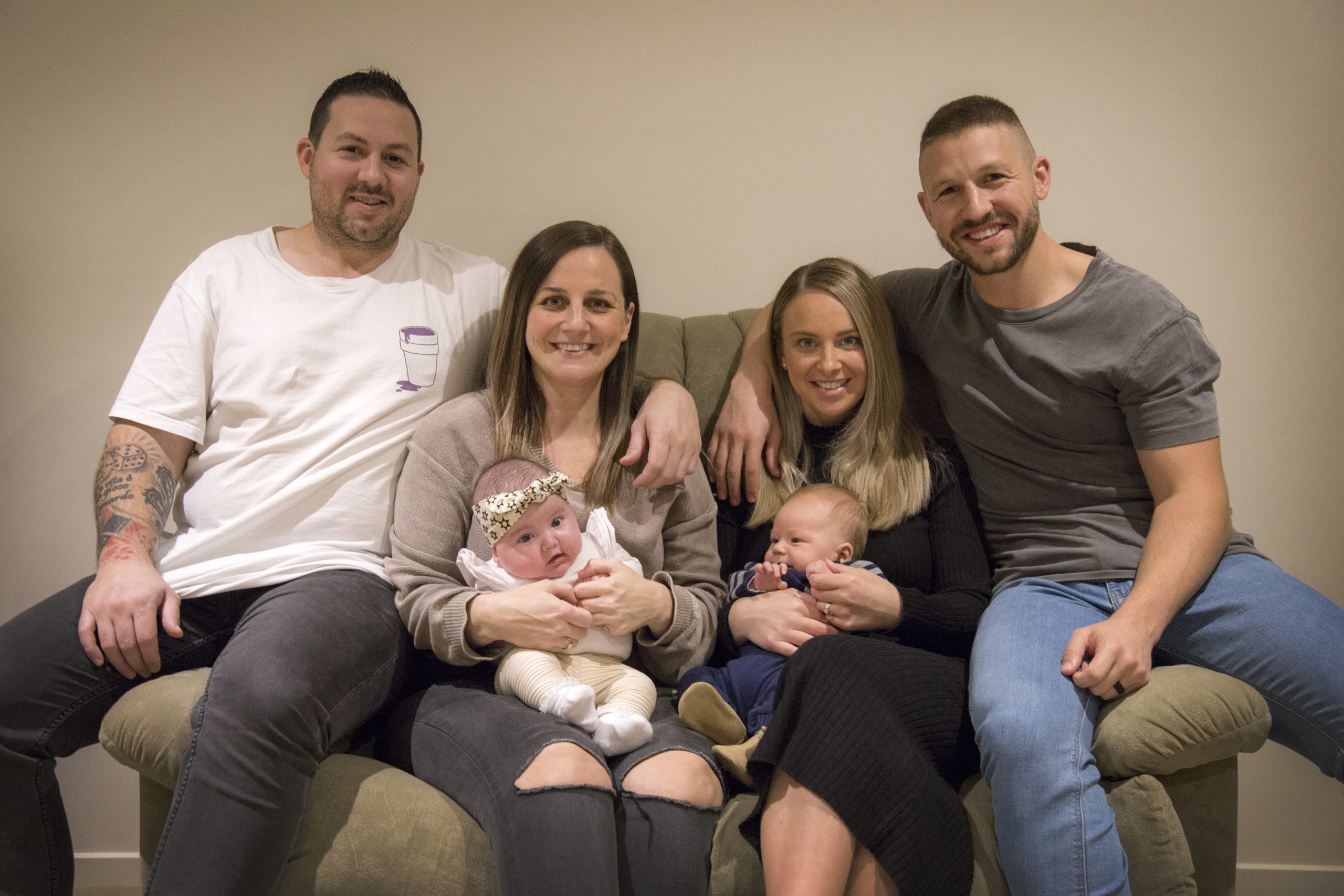 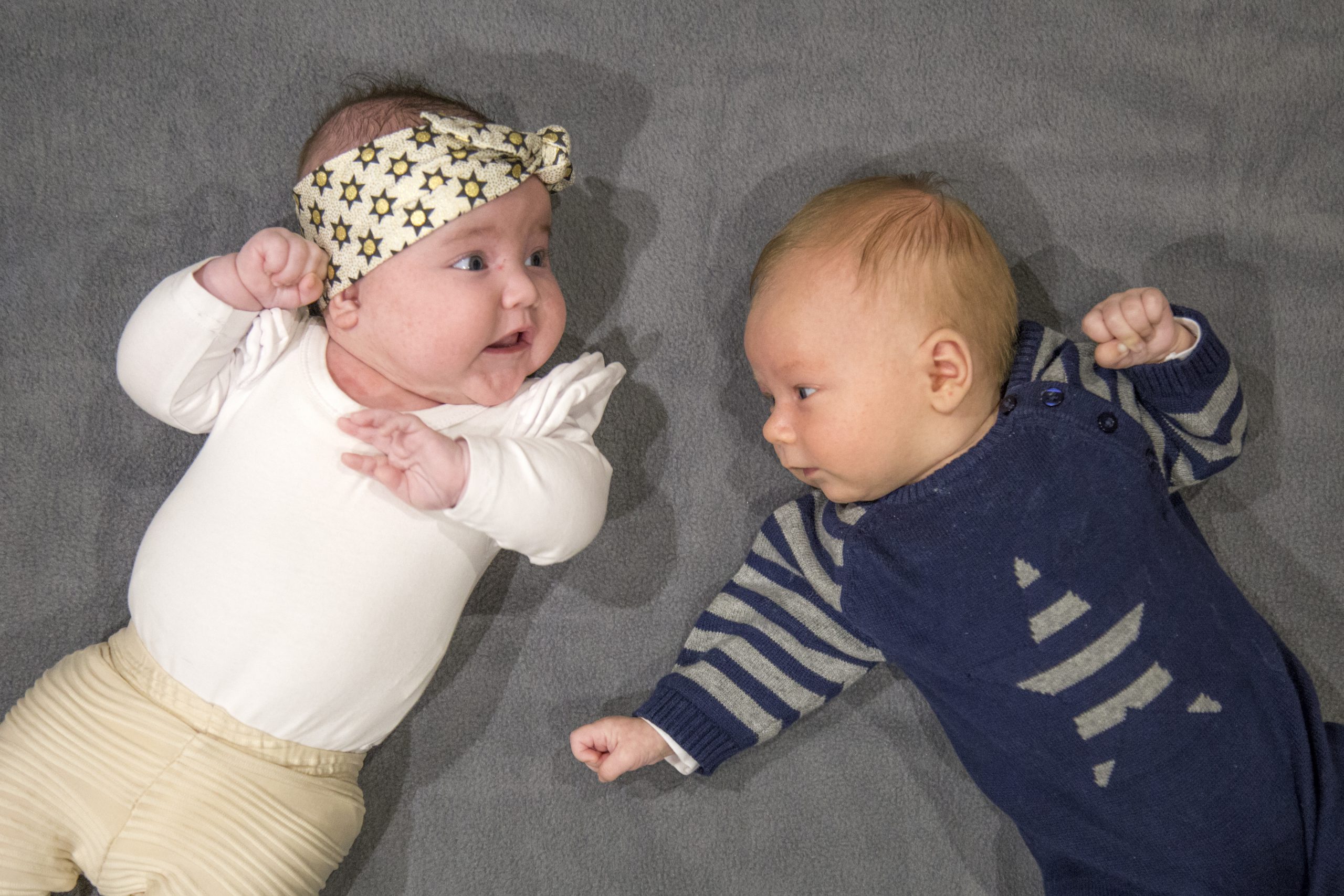 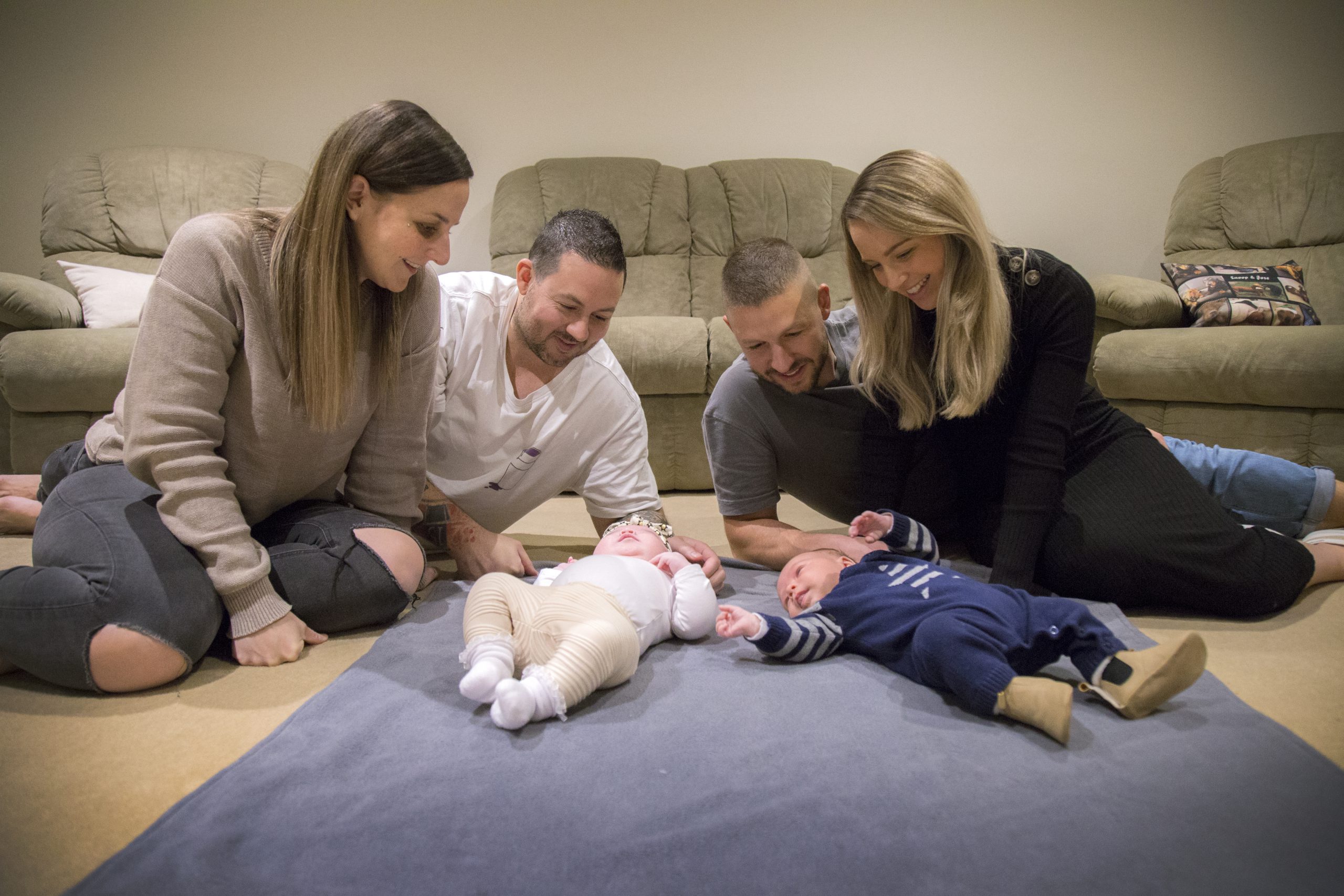 Pat Lambert along with partner Rachel Micallef and Stephen Lambert and now wife Monique had special announcements to make.

Both couples couldn’t wait to tell each other their news.

Speculation intensified one Saturday afternoon after a phone call between the brothers.

“From the start it was funny because I just proposed to Mon and I got a call from Pat saying ‘Where are you? What are you up to?’,” Stephen said.

“I thought this was a bit dodgy, what’s going on here? But Patty turned around and said ‘I’ll just catch you when you get back.’

“Mum then called me up and said ‘have you caught up with your brother?’ I knew something had happened.

“I bet you any money Pat has proposed to Rachel and she is going to think we’ve planned this.”

“We were both thinking that we’d both got engaged on the same day. What are the chances of that?” Monique said.

When the couples caught up a day later, Stephen and Monique constantly checked Rachel’s hand looking for that ring.

With the suspense building, they blurted out they were engaged and soon asked what news Pat and Rachel had to share.

“We were looking to see if she had a ring on,” Stephen said.

“So we told them we were engaged and then they told us they were having a baby. We didn’t have in our head that they’d be pregnant,” Monique said.

The news they had shared left the brothers discussing their futures.

“I was standing there cooking the barbecue with Stephen talking about Rachel being pregnant and saying ‘with you guys getting married, you’ll have a baby soon and then they might grow up together’ and Stephen was just going along with it,” Pat said.

“I remember Pat saying ‘maybe a couple of years apart, how cool would that be?’,” Stephen said.

Little did the would-be parents know that they weren’t the only ones expecting a little bundle of joy.

The cousins-to-be would be born only weeks apart.

“I remember seeing the looks on their faces and being confused,” Rachel said.

“We didn’t want to tell everyone yet, so we were keeping it hush, hush,” Monique said.

A few weeks passed before Stephen and Monique announced to the rest of the family during lunch that they were also expecting their first child.

“Stephen had this present and he had given it to my sister to unwrap and it’s a photo frame with an ultrasound picture in it. My sister is sort of crying when she looks at it and then passed it around the table. They then passed it to me and I’m saying ‘Yeah, thanks, why is my baby’s ultrasound in the frame?’,” Pat said.

“Stephen’s looking at me going ‘he hasn’t clicked yet, has he?’.”

Finally realising what was happening, the sisters-in-law then embarked on their pregnancy journeys together with their due dates only weeks apart.

“It was the best,” Rachel said.

“The first trimester I think we struggled the most but it was good because we were in it together.”

Fast forward to March this year when hospitals introduced tightened visitor restrictions due to the COVID-19 outbreak, leaving both couples anxious about what lay ahead.

“I think we both cried, I cried,” Rachel said.

“I was an emotional wreck.”

“I was terrified that Steve wouldn’t be able to be there with me during labour so we went into full lockdown, didn’t see anybody because I didn’t want to risk not having him there. That was the scariest bit about the whole situation,” Monique said.

“Bringing a baby into this world when you don’t know what’s going on is pretty awful.”

Rachel’s due date arrived on April 12 with no signs of going into labour.

“We had a driveway visit that day because it was Easter Sunday and we would normally have all been together,” Rachel said.

“It was my due date and Mon was still three weeks out. Nothing was going on, we both felt good. I didn’t feel like I was having a baby that day.”

“I hadn’t even packed for the hospital yet because it didn’t feel like it was ever going to happen,” Pat said.

From the beginning of their pregnancies both Rachel and Monique joked about having their babies on the same day and that Monique would have her baby first.

“I had joked all along that Mon was going to have her baby before me,” Rachel said.

Unbeknownst to each other at the time, both waters broke later that night. First Monique followed by Rachel, just an hour later.

“Our waters broke within an hour of each other. It’s just bizarre that, that happened,” Monique said.

Still unaware the respective mums had each gone into labour, Pat collected something from his car in the hospital car park when he saw Stephen and Monique’s car parked three spaces away.

“Pat called and I thought this is weird. He said ‘Guess what? Mon and Steve are here’ and I was saying ‘no they’re not, ha, ha Pat, very funny,” Rachel said.

Heading back into the hospital, Pat came across his brother’s name in the book while signing himself in.

“Right above my name I see Steve’s and I said to the lady at the desk he was my brother and she couldn’t have cared less,” Pat laughed.

Weaving back through the corridors to the maternity ward, Pat had his confirmation that his younger brother and sister in law were in the hospital somewhere.

“I went back in and Rach and I could hear someone in the room next door, I said to Rach ‘I reckon that’s Mon’,” Pat said.

Asking the midwife how many other people were on the ward that night, they replied with ‘only one other couple’.

Due to confidentiality reasons, the nurses couldn’t identify the other couple in the ward.

“We got them to go tell Mon and Steve we were there because they aren’t obviously allowed to say anything,” Rachel said.

“The nurse came in and I was mid contraction and the nurse said to Steve ‘this is something really bizarre, but your brother and his missus are in the room next door and her waters have broken’.

“This is like a movie,” Monique yelled from the bathroom.

Before Monique knew that Rachel and Pat were in the room next door she felt guilty that she had gone into labour.

“I had been thinking when I had gone into labour, this is so horrible, Rach is going to hate me, I’ve gone on her due date but, she was actually next door anyway,” Monique said.

The early hours rolled around on the Monday morning when the nurses told Pat and Rachel to step into the hallway and ‘just listen’.

“Soon as we went out and listened, we heard a baby cry,” Pat said.

“We got to hear Tommy be born. It was amazing,” Rachel said.

Rachel was sent home after her monitoring, only to return an hour later, where they passed Stephen and Monique in the hallway.

“Poor Rach was going in for it and I was just coming out, it was a very emotional time,” Monique said.

“I remember telling her ‘she’s got this’ but really in my head, I was like ‘holy s*** she has got to go through that.’ I was trying to be super, super positive.”

A little over 18 hours from the time Thomas arrived at 3.06am, his younger cousin Jewel was born at 9.45pm.

“It was an intense wait to find out. We kept walking past the room, trying to listen,” Monique said.

What was an unusual and exciting time for the couples featured a twist in the tale.

“They were twin cousins, but they didn’t get to meet for a whole week,” Monique said.

It had not been all smooth sailing for young Thomas, who was sent to Monash Children’s Hospital in Clayton with breathing difficulties at the time Jewel was making her entrance into the world.

“It was awful and it was all a bit odd,” Monique said.

“Our niece had just been born so we were so excited to meet her and see her so that was a bit of a positive for us before going down to Thomas.”

The couple were on the road to Melbourne soon after Jewel’s birth to see their little boy, who was in the NICU.

Stephen and Monique were also unaware what situation they would walk into due to the restrictions in hospitals.

“Mon had only just given birth less than 24 hours prior and we didn’t know who could go, if I could go,” Stephen said.

“I was allowed to stay with Thomas if I wanted to sleep on a chair next to his crib as he was in the NICU but, because I was so emotional, I had just given birth and discharged myself from the hospital, I chose to stay with Steve,” Monique said.

Unfortunately due to COVID-19 restrictions, Ronald McDonald House weren’t taking in new patients or families, but instead hosted the couple in a hotel nearby.

“Ronald McDonald House put us up in accommodation which was really, really good,” Stephen said.

“They were absolutely fantastic.”

After a short stay at Clayton, Thomas was back on track and allowed to return home.

“Thomas is doing amazing now and we were just very appreciative and excited to get home,” Monique said.

Giving birth in the middle of a pandemic came with a positive aspect, with the four having each other there to bounce off.

“It was a family thing,” Stephen said.

“It was like we got around the system to have visitors. It was really special,” Monique said.

To add to their positive outcomes, the couples had nothing but praise for Latrobe Regional Hospital’s Thompson Ward.

“It was a pretty positive experience considering what was going on. You were just in your own little bubble in there. It was so quiet in the hospital. The midwives were awesome, they were just brilliant,” Rachel said.

“It didn’t feel like it was the middle of a pandemic, they made us feel reassured and they were absolutely amazing, we couldn’t fault the Thompson Ward,” Monique said.

“They kept us in the know and calm, it was perfect,” Stephen said.

Isolation hadn’t been all bad for the new mums as they returned to their respective homes.

“You had time to recover and get into a routine in your home,” Rachel said.

As the cousins begin their journey of growing up together, their parents are already looking to the future and have an idea of what life will be like.

“I think Jewel will be the bossy one and I think Tommy will do what she says. She’ll be the girl power.”

Even though they might not look alike, the cousins may confuse teachers if they attend the same schools in the future.

“They’ve got the same last name, it’s going to be bizarre,” Monique said.

One thing is for sure, the cousins will have a bond like no other.