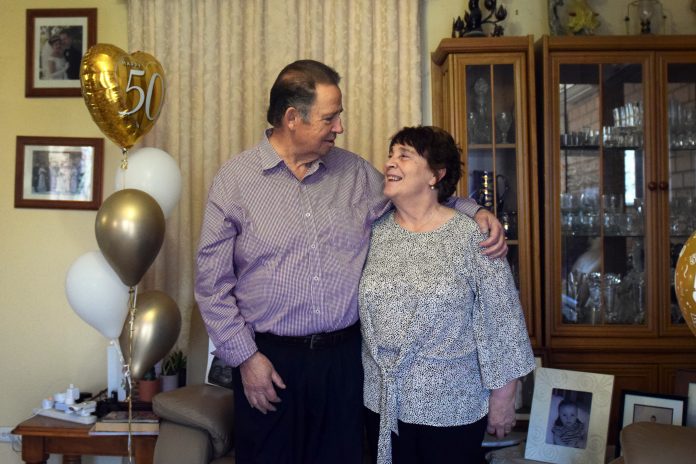 Although their initial plans were thwarted by coronavirus, Traralgon’s Damian and Melina Tripodi still celebrated their 50th wedding anniversary in isolation on Saturday.

The couple was supposed to mark the occasion by travelling to Chiesa di Santo Rosario (Church of the Holy Rosary) where they were married in Italy.

Instead they were surprised with a barrage of balloons, flowers and cards delivered to their door.

Their family even made a poster with photos of those who were not able to see the couple for the big celebration, which the Tripodis said was “really special”.

It was love at first sight for Mr Tripodi, who knew he would marry Melina upon meeting her for the first time in the small town of Palmi, Italy.

In 1968, Mr Tripodi travelled to the seaside town with his mother to visit his birth country.

“When I arrived in Italy my relatives were preoccupied because they wanted to find me a bride, and it took a lot of huge effort to convince them that I wasn’t interested in a wife at that stage,” he said.

“I went for a trip around Italy and mum stayed, she told me that just the day before one of her friends came to visit with her daughter, and what a beautiful girl she was.

“The next day I was in the car with a cousin of mine and I looked over to see two girls at the community tap – which was originally the village well – where two ladies were gathering water and washing and as soon as I saw them I told my cousin to stop the car, that was Melina, the daughter my mum told me about the day before.

“The next day I was in my paternal grandmother’s house … Melina lived at the edge of town next to my grandmother’s property and I saw the same girl that I had seen yesterday … it was winter, very cold and I chopped a lot of wood for my grandmother that day.”

Mr Tripodi was finally introduced to Melina officially when he saw her picking olives with her mother and spent a few days getting to know her, with a chaperone, before he had to return to Australia.

The couple sent letters to each other for 18 months before their wedding day and Mr Tripodi said he was not able to attend his own engagement party, but said that was just “love by long distance”.

Mrs Tripodi said she thought that nothing would come of her time with her future husband all those years ago.

“I thought he’s a nice man, but he will go away … but then we started sending letters and I have most of those letters still with me,” she said.

“I told him if he wanted to marry me we would have to get married in Italy before I moved to Australia with him.”

Mrs Tripodi said the move was not an easy one and she spoke no English, but taught herself the language by reading magazines and watching television.

“(We) didn’t have much when we were younger but together we have done a lot, which is good because we did it together,” she said.

“Fifty years is to understand one another, my mother used to say ‘be friends when you go to bed you can’t be mad at each other’.

“We worked hard, I was cooking all my life, he was a teacher and we now have three children and seven grandchildren who love us, so I think we have done a good job.”