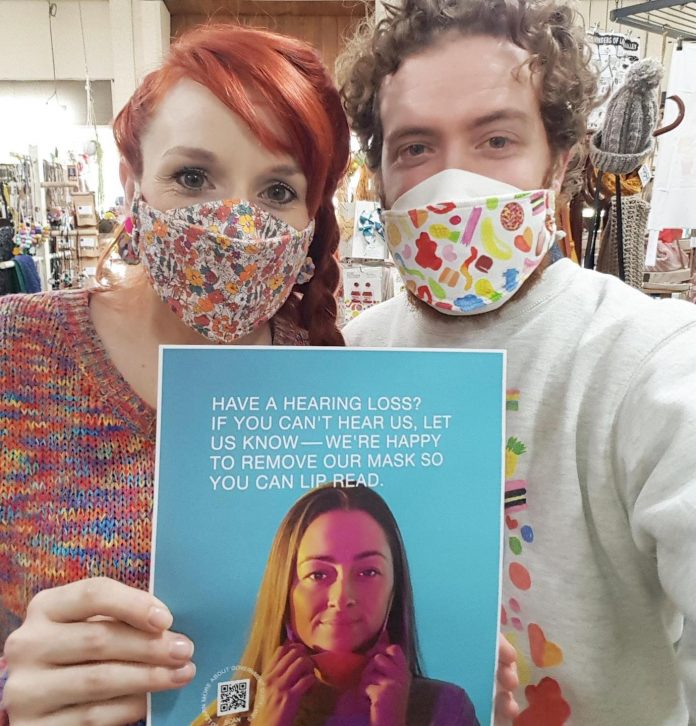 A campaign to support people with hearing loss is making waves across the business community in Gippsland with owners offering a simple gesture to assist customers.

The Mask Advocacy Campaign encourages business owners and staff to remove their masks when attending to someone who is hearing impaired so that they can lip read.

The campaign, which was initiated by Warragul-based earring designer and hearing loss advocate Courtney Baker, was slowly gaining support among shop owners in Yinnar, Traralgon and Morwell since it was launched three weeks ago.

Ms Baker, who was born with hearing loss, decided to launch the campaign to raise awareness of exemptions around wearing masks.

She said a lot of people were not aware that they can legally remove their mask if they are communicating with someone who is hearing impaired.

“We launched it two or three weeks ago and it’s just getting momentum,” Ms Baker told The Express.

“I don’t’ think mask wearing is going to end anytime soon so we’re just spreading the word out there.”

Ms Baker said it was important for people experiencing hearing loss to see the face of the person they’re talking to as they do a lot of lip reading for communication.

“It is a daunting and an emotional experience when you’re trying to make a transaction to ask someone to remove their mask saying you’re hearing impaired and they’d say no. It makes you feel like you’re not welcomed there,” she said.

Ms Baker, who was severely bullied in school as a child because of her hearing loss – her left ear was totally deaf while her right ear is 40 per cent functional, said she personally experienced this when out shopping.

“People mistakenly think too that when you’re wearing a hearing aid that you’re in perfect hearing. That’s a misconception,” she said.

“The hearing aid makes the sound a bit louder and clearer but you’re still hearing impaired.”

Ms Baker said she initially distributed the poster ,which has her photo, to shops in Warragul, however, stores in the Latrobe Valley who sell her handmade earrings, also offered to support the campaign.

One of those shops is the Yinnar General Store.

Shop owner Matthew Dennis said he was happy to support the campaign and hoped to raise awareness for the general community.

“We are aware that there are a lot of people in our community with hearing difficulty and have quickly found out how hard it is to communicate while missing so much of our facial expressions and mouth movement,” he said.

“Even if nobody asks us to remove our mask while talking to them, we hope having the sign up will make visitors to our shop aware that some of our community members are struggling with communication and they don’t need to feel anxious about removing their mask to speak with them.”

Mr Dennis said staff in his shop remove their masks by the ear loop to avoid touching the front of their face covering and while keeping the required distance.

“Keeping 1.5 to two metres between ourselves and customers isn’t too tricky for us as we’re behind the counter anyway,” he said.