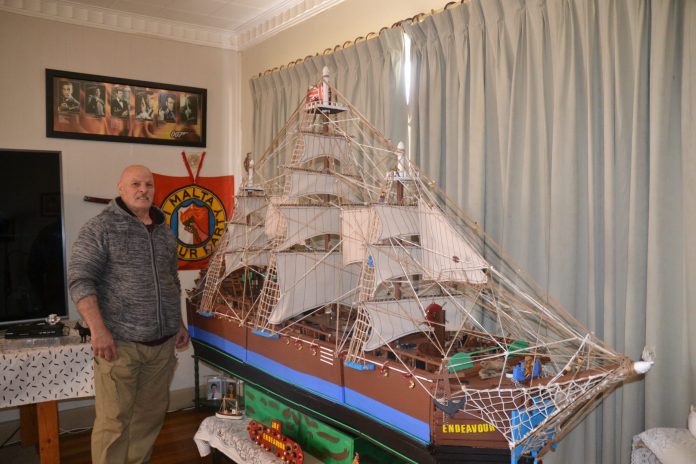 When Joe Tanti built his first model ship at the age of 14, there was little indication more than five decades on he would fill his garage with hundreds of them.

One was an eight-foot replica of James Cook’s HMS Endeavour, which he made out of wood and accessorised with miniature boats and strings to complete the look of a sailor ship.

The other was a model of a US aircraft carrier, which stands two metres long and boasts miniature bomber planes and ammunition.

Mr Tanti, who came to Australia from Malta in 1965, said he was always fascinated by ships and tankers as a young boy.

“When I was a teenager I asked my brother Fred to make me a model ship and he said to me ‘you do it’ and so I did,” he recalled.

Mr Tanti said his first model ship was created using plastic and from there evolved to using other materials such as wood.

It took him seven months to complete his two projects, working on them at times as early as 3am in his backyard because he couldn’t go back to sleep.

Mr Tanti is a self-taught handyman and moved to the Latrobe Valley after working at a Melbourne butcher shop for 38 years.

How he was able to make around 600 model ships, planes and tankers that take pride of place inside his Morwell garage is as interesting as his fascination for Asian superstar Bruce Lee and his love for collecting candles.

Mr Tanti looks at photos from magazines and uses his imagination when working on a replica.

“I like model ships, if I see something I just want to do it,” he said.

“Maybe this would be the last one because there’s not much room in my garage.”

Mr Tanti said he decided to do his latest projects as a way to keep busy during the lockdown.

He is an active member of the Maltese community and played a huge part in setting up the Maltese museum in Morwell, the only one of its kind in Australia.

“With the Maltese Club closed and I can’t do gardening on people’s homes where do I go?” he said.

Mr Tanti said the HMS Endeavour replica was the most difficult project that he has done so far as he had to bend the wood he used to build the sides of the ship.

“You need to get them wet to be able to bend them,” he said.

Mr Tanti said he was happy to sell his model sailor ship for $1000 and the aircraft carrier for $400 to any buyer.