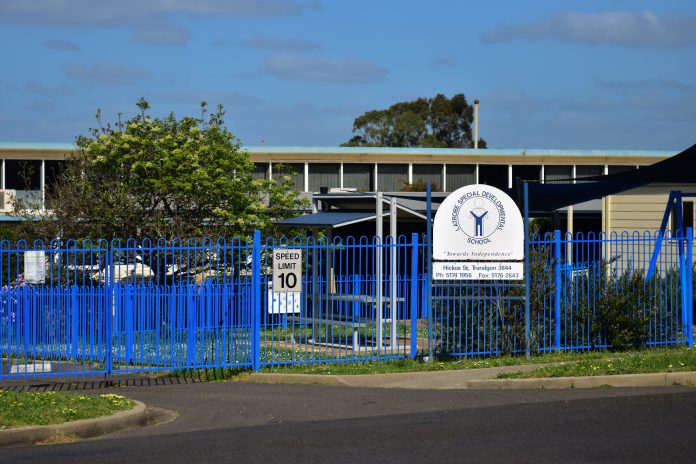 Authorities have declared they are investigating allegations of misconduct that have been levelled against staff at Traralgon’s Latrobe Special Developmental School, The Express can reveal.

The Victorian Department of Education and Training confirmed it was investigating allegations, which include the manhandling of students with disability, alongside WorkSafe and Morwell police.

“We are aware allegations have been raised about inappropriate behaviour towards students at Latrobe Special Developmental School,” a government spokesperson said.

“We encourage any families who are aware of inappropriate behaviour to come forward so we can manage this appropriately and provide support to those who need it.”

WorkSafe Victoria also confirmed it was investigating the allegations, while the Morwell Sexual Offences and Child Abuse Team said it was aware of the alleged offending.

A consortium of concerned people including parents of Latrobe SDS students called Voices for Special Needs are working with all three authorities.

A spokesperson for the group alleged the school had failed to implement standard procedures of child protection and safety “for a very long time”.

She alleged there had been numerous instances involving inappropriate staff behaviour towards students and of students against other children.

“We as a collective feel that the school is not being run and hasn’t been run under leadership for some time to the standard of child protection (and) child safety,” the spokesperson said.

“We have evidence to support the … due process is not occurring in that school environment. There’s a culture there that’s become … it’s immoral, it’s unethical, it’s secrecy, it’s divisional among staff.

“We feel that there’s a group of really good staff who have genuine care and concern and compassion for these children and yet, when they raised inappropriateness occurring in their school, (the school said) ‘don’t make a big deal out of it.”

The consortium compiled witness statements for more than 45 incidents of alleged misconduct at Latrobe SDS and is also preparing a submission for the Royal Disability Commission.

The Express understands there are more than a dozen people impacted by the allegations, with children involved ranging from five to 18 years old.

The children have varying disabilities and some are non-verbal.

The spokesperson said police were called to investigate because of allegations of sexual assault against children by other students.

“There’s a number of incidents that were not addressed that relate to sexual assault on children,” she said.

“So this is student-to-student, but in saying that, the concerns are not only relating to that but the fact that there has been no documented support put in place to support the victim or the accused and their families.

“There’s a lot of special needs children that don’t understand appropriate behaviour but some of it is sensory regulation behaviour.

“It’s understanding the balance of what is sexualised sensory regulation behaviour as opposed to what is inappropriate, understandable sexualised behaviour.

“We’re not here to point fingers in terms of alleged person/victim but we’re saying there has been a failure of process for both people involved in these incidents and their families. The school has failed both here.”

The spokesperson said the consortium was seeking an independent investigation into the allegations.

In a letter distributed to the school community, a copy of which has been obtained by The Express, Latrobe SDS confirmed it was working with authorities to “take appropriate steps to respond to these matters”.

“I wanted to reassure you that the health and safety of our students and staff is always our school’s number one priority,” principal Nicole Herbert said.

“We take any allegations concerning health and safety extremely seriously.”