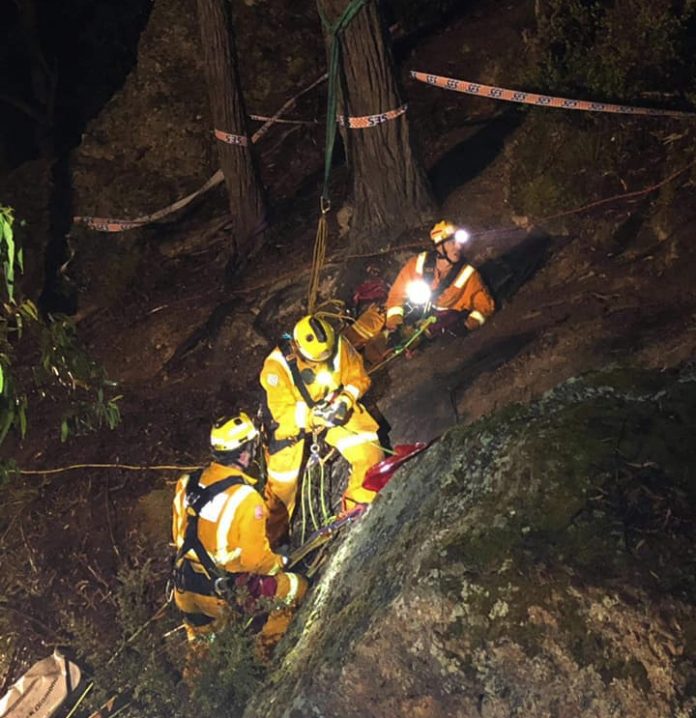 A teenager is recovering after falling down a cliff in Tyers last night.

CFA crews arrived at Peterson’s Lookout in Tyers Park at 8.16pm to rescue the hiker who was found approximately 80 metres down a rock face.

The rescue operation took about six hours, before the hiker was taken to LRH in a stable condition with head injuries at 2.30am.

CFA Acting Commander Greg Fisher attended the scene and said crews from all agencies worked seamlessly together to complete the successful rescue operation.

“There were a few challenges such as rain, minimal lighting and rocky terrain with an area of heavy scrub at the bottom of the cliff face,” he said.

“Many of our personnel on scene had actually conducted some of their rescue training in the area, so they knew quite a few of the anchor points required to pull of the rescue.”

AC Fisher said the hiker was located about 500 metres from the nearest vehicle access point, making it a challenge to transport the required rescue gear to the site.

“Everyone did a fantastic job and did what was needed,” he said.

VICSES volunteers from the Morwell unit provided specialist equipment including a ‘mule’ all-terrain stretcher, which was used by crews to transport the hiker to a waiting ambulance.

They also supplied specialist lighting equipment along various parts of the walking track, and a marquee to keep first responders dry during wet weather.

FRV supported CFA with a technical rescue appliance, two pumpers and a specialist vehicle during the incident.