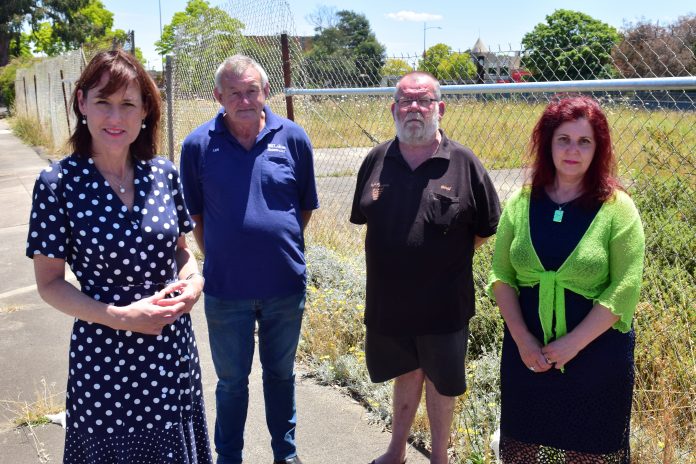 An abandoned petrol station in Moe has been labelled “a disgraceful eye sore” by a consortium concerned with declining safety in the area.

“The old petrol station is in a prominent position on Lloyd Street, Moe, near the train station and it’s one of the first things you notice when travelling in and out of town,” Ms Bath said.

“Residents want to see the revitalisation of Lloyd Street, yet the Andrews Government seems content to allow the contaminated site complete with temporary fencing, grass and weeds to sit idle.

“It is not a good look for the town and it’s upsetting residents and local business owners who take pride in their local neighbourhood.”

The land is owned by state government agency VicTrack and held under lease by a private company.

The underground petrol tanks have been removed, but Ms Bath wants to see further remedial works undertaken at the site to address contamination issues.

“The area needs to be rehabilitated and repurposed so that it’s both safe and usable,” she said.

“Moe residents want the area cleaned up and turned into a usable asset that is in line with the community’s vision for the town rather than undermining it.”

Ms Bath said community consultation was also needed to determine the best use of the site.

“Minister Carroll must commit to undertaking consultation with the community and Latrobe City Council on the rehabilitation of the site and plan the best use of the space,” she said.

“The community has suggested it’s a perfect location to construct new parking space for the town to encourage people to better access the Lloyd Street shopping strip and the rail service.

“The Andrews Government has a responsibility to ensure the lessee meets its obligations to rehabilitate the site, otherwise action it themselves and return the land safely to the community.”