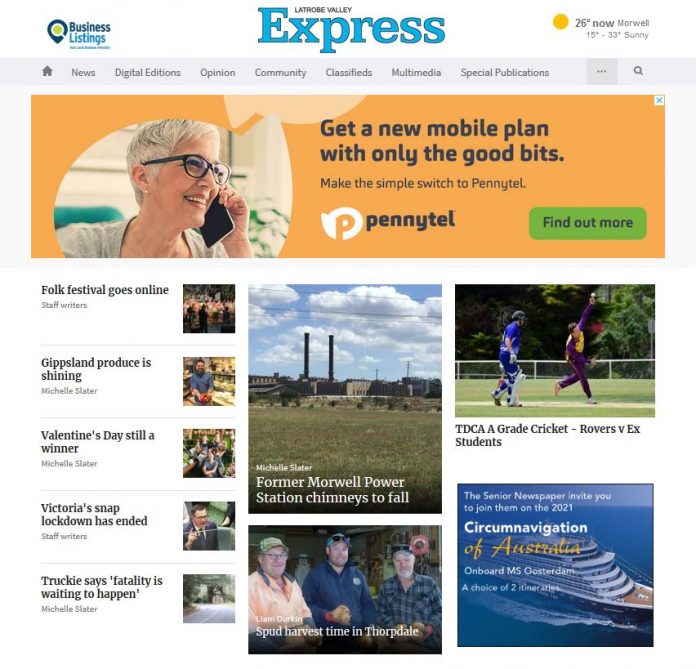 The Latrobe Valley Express is remaining to be vital source for local news, despite last Thursday’s discovery that Facebook banned news outlets from publishing stories on its platform in Australia.

But the ban extended to non-news providers, including local Members of Parliament Russell Northe and Melina Bath, whose pages were also stripped or severely restricted.

Links to government agencies such as the Bureau of Meteorology and emergency service providers were also casualties in the swift move from the global social media platform.

The news blackout came as a dummy spit to proposed federal government laws forcing giant tech companies such as Facebook and Google to pay Australian media outlets for news content.

Country Press Australia president and Latrobe Valley Express and Gippsland Times publisher Bruce Ellen described Facebook’s move as “typical of the response we would expect of a monopoly”.

“Facebook pays almost no local taxes, is not subject to same defamation laws that news outlets are required to follow,” Mr Ellen said.

“They use content from news outlets and pay no copyright fees. Why should they not pay?

“Their already questionable credibility will be destroyed in the eyes of users. Fake News, vitriol and conspiracy theories will dominate discourse even more.”

Mr Ellen said news outlets provided Facebook with relevance, balanced and factual news, and the company had been “riding off the backs of news outlets for too long”.

He said the move demonstrated to the world why the federal government’s actions were necessary.

“Facebook is trying to exert pressure on a democratically elected government to progress their own commercial interests,” he said.

Federal Member for Gippsland Darren Chester said it was “disappointing” that Facebook had chosen to block Australian news on its site as many people used the platform as a news source.

“If Facebook maintains this position, it will inevitably compromise perceptions in the Australian community of the quality and reliability of information on the site,” Mr Chester said.

“The federal government has continuously said that we want Facebook and Google to continue operating in Australia – but it is expected that they will comply with laws passed by the Parliament of Australia.”