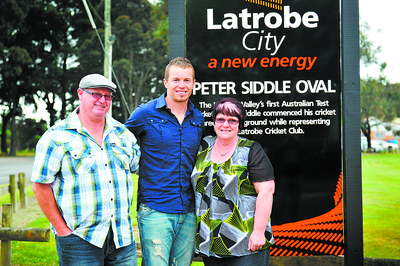 For anyone who has played elite or semi-elite sport, it is inevitable the journey towards these accomplishments started in childhood, and involved a lot of travelling – especially if you lived in the country.

When presented with an athlete who has made a significant achievement, it is rare the efforts of the people behind their success are considered.

To try and gain some insight into what it is like to ferry budding athletes across Australia, The Express spoke to Steve Siddle, father of Australian fast bowler Peter Siddle, and Latrobe Cricket Club opening batsman Daniel Siddle.

Steve said from an early age, Peter and Daniel excelled at many sports.

“From the time they were quite young they played basketball, little athletics, Aussie rules and soccer,” Steve said.

“Peter was about 12 and Daniel would have been nine when they took up cricket.”

Steve said he and his wife Alison made the conscious decision to ensure their children could take advantage of opportunities that came their way, but there was an important condition.

“We said to them, we’ll take you anywhere in Australia, as long as you put in the effort,” he said.

As the boys improved, primarily in cricket and basketball, Steve said there came a time when the family was making three or four round-trips to Melbourne each week.

“But living in the country, we had to do it.

“All the best squads with the best coaches were in Melbourne.”

With all the travel, Steve recalled how Peter developed an ability to fall asleep anywhere, something he believed was significant.

“He would go to sleep in the car, so he’d be ready to go when he got to training,” he said.

“I think it was a very important skill, because he was refreshed by the time we arrived.”

According to Steve, many talented children in regional areas missed out on opportunities because their parents were not able to invest the time and money required to take them to Melbourne or wherever needed to go.

“It’s a real shame; so many kids have the talent to go on but the lack of access to professional coaches in regional areas makes it difficult,” he said.

“There’s also a relatively small amount of funding available for kids to go and play in the city, to help cover travel costs and related things.”

When asked about what he believed was important in parenting children through sport, Steve reinforced all children are different, but shared a few rules he and Alison abided by when it came to Daniel and Peter.

“We never pushed them to do anything,” he said.

“We were also never negative.

“If they went out for example we’d always ask them why they went out and try and get them to identify what they needed to improve.”

While the Siddle’s did go without “quite a few things” to enable Peter and Daniel to pursue their sporting goals, with two children who he and Alison are immensely proud of, Steve said he would not change anything.