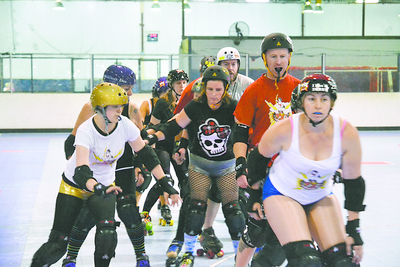 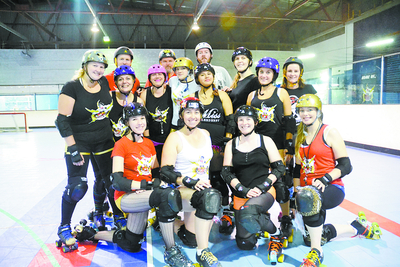 Blondage, Betty Blackout, Terror To Pieces – these are the derby names of just a few women who will compete in the adrenalin-fuelled roller derby bout at Stadium 34 on Sunday night.

Latrobe City Roller Derby’s Tegan Douglas, or T.N.Teegs, said her team, Mega Hertz, was “super excited” about the upcoming bout against the North Side Rollers in this weekend’s ‘Mo’Town Showdown’, which will be a re-match of their first ever bout which took place in November.

“The girls have all been training really hard,” Douglas said.

“We beat the Death Stars (North Side Rollers) last November by quite a bit, so we’re definitely looking to win again and see how much we’ve improved over these few months.”

As hinted by the names, and the intensity of last Thursday’s training session as witnessed by The Express, roller derby is not a sport for fragile souls.

A full contact, women-only sport, it is unique in it’s makeup as well as the combination of skills it requires.

Although the rules can vary, in this competition two teams of five players skate together in a pack, counter-clockwise around the track.

‘Blockers,’ ‘jammers’ and ‘pivots’ set the pace at the start of the derby, then the jammers from both teams try and weave through the pack.

Once a jammer has successfully moved through, they can start scoring points by completing a lap and moving through again.

The first jammer to emerge becomes the lead jammer, who is then considered to have strategic control of the game.

If it sounds confusing, it all becomes clear once the skaters hit the rink.

According to Douglas, the Mega Hertz team has attracted women from across Gippsland, ranging from keen athletes to those who had never played competitive sport.

“The thing that’s so great about roller derby is that it’s a full contact sport run by women, for women.”

Douglas also said the sport encouraged acceptance of the female form, and over time women who never saw themselves wearing hot pants gain the confidence to wear them because in roller derby, they are practical.

“It celebrates things about your body that society doesn’t always encourage,” she said.

“In roller derby, it’s good to have big hips because you can bump skaters out of the way.

“The tight clothes in derby have a purpose – it’s harder for skaters to grab onto, so it’s part of the strategy.”

This Sunday will be the first home bout for Mega Hertz, and stands to be a close match since the Death Stars started ‘rolling’ at about the same time as Mega Hertz, in 2010.

The doors open this Sunday at Stadium 34 at 6pm for a 7pm start.