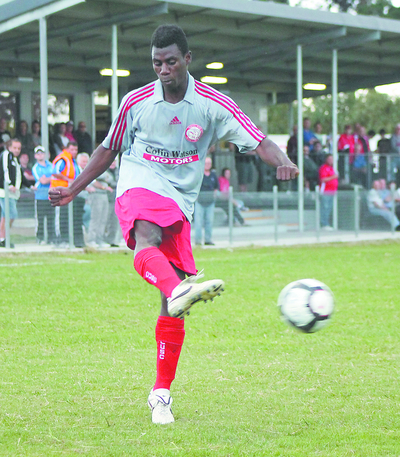 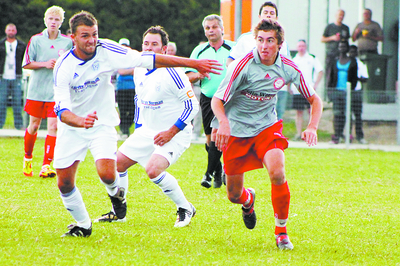 Churchill United made it through to the Battle of Britain Cup final for the first time since 2007 with a 2-1 win over Traralgon Olympians on Sunday afternoon.

The Rams controlled most of the play in the first half with strikers Jesse Kennedy and Kwaku Dade hard to control but both players spurned chances to score.

Mid-way through the half Churchill went ahead when wingman Dean Pyle hit the cross bar with his shot from outside the box, which then fell to captain Jamie Robson who confidently headed the ball into the back of the net.

Olympians began to find the feet of strikers Tony Pardo and Frank Albanese late in the half and just before the break the duo were in the action for the Blues to pull level 1-1.

Pardo’s headed attempt at goal was saved by Rams ‘keeper Jason Sands, but he parried the ball to Albanese who cooly finished.

In the second half Churchill lost its drive as Anthony Collins, Kenny Higgins and Clayton Bell began to impose themselves on the match.

Albanese almost made it 2-1 for Olympians but Sands was equal to the task when he saved an attempt at goal.

Both sides used their full accompaniment of substitutions with Dade, Pyle and Nathan Osborne all succumbing to injury for Churchill not long after the break.

Rams striker Luke Cheney was struggled with injury soon after his introduction, as where Aidan Huizer, Tim Dawson and Kennedy, but with all substitutions used they were forced to grind the match out.

As the match entered extra time the depleted Olympians attempted to defend and aimed for the penalty shoot out that would follow should the match stay level.

However, two minutes into the second period of extra time Churchill scored the winner when Cheney beat his marker to meet Robson’s long ball with a diving header.

Falcons exacted some revenge for last season’s Battle of Britain Cup loss to Fortuna with a 3-2 win after extra time was required to separate the Crinigan Road rivals.

Fortuna and Falcons went at it hard from the kickoff with the play going end to end as each team attempted to take control of the game.

Twelve minutes into the match Baldwin set up forward Hayden Tanti inside the 18-yard box with a through ball, which Tanti slotted past Falcons ‘keeper Adrian Salvatore.

Falcons’ Robert Cusworth earned a free kick from a rough tackle on the wing and Nick D’Alesandro stepped up to take the kick.

It was a pin point strike which went over the head of Fortuna ‘keeper Leon Cook to level the score half an hour into the match.

The half-time break did not dampen the endeavour of either team.

On a counter attack the Fortuna midfield streamed forward as a group, with Kelly crossing the ball to Coltman onto Tanti who slotted home his second seven minutes from the restart.

With three minutes of regular time to play Fortuna’s Shayne Cassar gave a penalty away when he fould Isaac Abas.

Falcons coach Marou Deluca stepped up to the spot before slotting the ball past Cook who dived the right way but was unable to stop the shot.

With the scores level 2-2 extra time was needed to settle the account.

Fortuna worked hard and were almost rewarded by Baldwin, but his goal was disallowed for offside as the first period of extra time ended.

It was in form super sub Marcus Tawfik who delivered Falcons its fourth cup final berth in as many years when his acute angled shot beat Cook in the Fortuna goals for a memorable 3-2 win.

Falcons will face Churchill in the final at the end of the season proper in September.