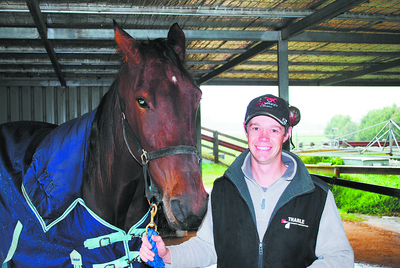 Glenn Hunter knows how to drive a winner – a winning horse that is.

His latest success came over the Easter weekend at the Warragul Cup meet, where he drove Drop of Paradise to victory in the Radford Butchers Trotters Handicap.

“I think for the year I would have ridden about eight winners and four of them would have been at Warrargul,” Glenn said.

“It wasn’t one of his best performances,” Glenn said.

Glenn, who grew up around his father’s horses, became involved with harness racing as a 16 year- old.

“I started helping Dad after school and I’ve been into it ever since,” he said.

According to Glenn and Chris, the horses are “all consuming” and do not leave much time for other hobbies.

“I don’t know what I’d be doing if I wasn’t doing this,” Glenn said.

As well as training 14 horses – seven of his own and seven of Chris’ – Glenn is associated with breeding for part of the year.

“During the breeding season (October to March) I work with an equine vet,” Glenn said.

“With the horses there’s no artificial insemination, so I basically scan the mares to see when they’re ready to take.

“It’s a really interesting process, and I love being around the horses; it’s something different.”

Chris took to the sport 42 years ago, when a syndicate he was part of decided to sell the horse it owned.

“From that time, I was 20, I took him over and started training him myself,” Chris said.

“That’s where it all started, in Drouin, and now we’ve been here at Trafalgar for about 30 years.”

Chris and Glenn said they chose harness over thoroughbred racing because “harness racing is more hands-on”.

“I can train and ride a horse myself, but with thoroughbreds that doesn’t usually happen,” Chris said.

Having “no weight restrictions” was also another benefit of harness racing, which takes pressure off drivers, according to Glenn.

Over the coming months, Chris and Glenn will work with young trotters, which Chris said can be “quite a challenge”.

They said pacers wear hobbles to control the stride, whereas trotters have to be taught to trot at speed without breaking.

“When horses get to a certain speed, they’re meant to gallop,” Chris said.

“It takes a lot of patience to teach them not to break (stride).”

The next harness meeting at Warragul will be on Thursday, 24 May.