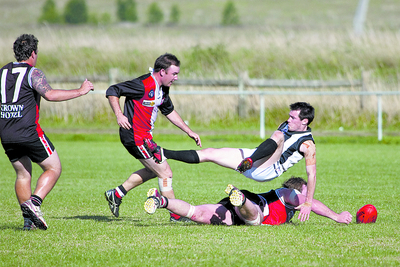 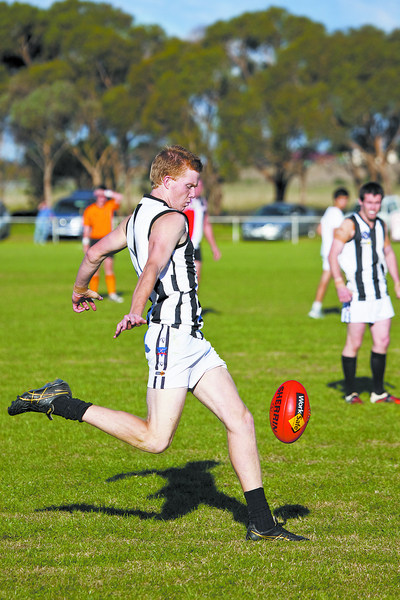 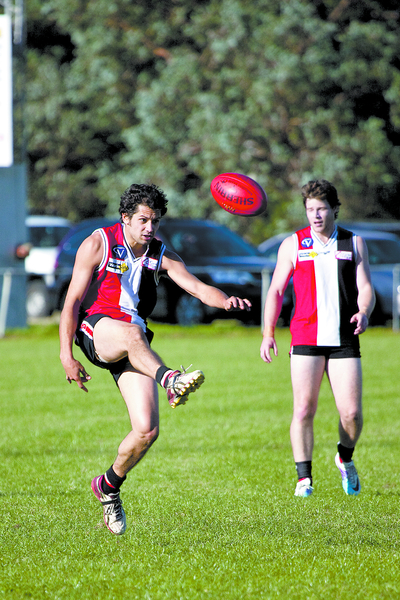 THE eagerly anticipated clash between Rosedale and Traralgon Tyers United was billed as the match of the round; however, the match failed to live up to expectations after quarter time.

The match was all but flattened within the closing minutes of the second term, as Rosedale went into the half-time break with a comfortable 13-point lead.

Rosedale started on the front-foot opening the day’s account with the first, before Brian Graham responded with the first of two quick majors for the visitors.

The goals continued to flow for both sides with nine scored in the opening term.

Both teams’ key forwards were held in the first term and throughout the contest, with Bombers defender Callum Laurie-Rhodes locking down the Blues’ danger forward Ross McDermott.

While McDermott had a quiet day in front of goal, it was Flanagan who stood tall, taunting the Bombers’ defence that had no answer to his strength and positioning in the forward arc.

Flanagan was amazing as he kicked 10 goals, most of which came from contested marks and many of them against multiple opponents.

Yet credit must go to his teammates, as they continuingly sat the ball out in front of him to mark.

Rosedale continued to hit targets, amass possessions and make the most of its opportunities in the second half with Dale Fleming and McDermott providing the spark in front of goals.

While Rosedale flexed its muscles in the second half, the Bombers appeared to fall away because until the main change the side had been a competitive opposition.

The Graham brothers, Chris and Brian, went about setting up play around the ground, while ruckman Luke Middleton proved to be a competitive opponent for Rosedale’s big man Jon Cantwell.

Dane McGennisken did enough to impress in the several roles he played, while coach Daniel Hawking looked to lift his side at every opportunity.

TTU’s Guy Sinclair was forced from the ground with a dislocated elbow.

Churchill has bounced back from a slow start, trouncing Gormandale by 102 points to win its first game of the season.

Kicking 6.7 (43) to a mere one point with the wind in the opening term, the Cougars established an advantage and the side built on its lead at every change.

Sale City overpowered Woodside in the second half to win by 16 goals after blowing the game apart in the final term.

Six goals to Nic Grainger and four each to Mitch Bennett and Josh Tollner spearheaded the Dogs to their third straight win this season, 25.21 (171) to 9.10 (64).

Sale City upped the tempo at the final change, with Jake Schuback lifting his side in a standout individual performance, while Tollner and Grainger were also among the best.

For the home side, Sam Hanratty and Josh Griffin toiled hard all day while Ryan Foat finished the match with four.

Glengarry stormed home to an emphatic 45-point victory over Cowwarr.

Glengarry opened up a 20-point lead at the long change with a seven goal to four opening half.

Shaun Barnes and Josh Piper were in blistering form in front of goals.

The Saints rallied after the long change to come within seven points at the final change before the visitors put their foot down to power away with a 7.3 (45) to 1.1 (7) term.

Veteran Trevor May was a standout with Chris Wangman and Bobby Marshall also influential throughout the match.

For the Saints, Shane Morgan and Jordon Bourke were among the votes.

A best on ground performance by Sean Humphries steered Heyfield to its second win of the season.

Facing the threat of consecutive losses, the Bombers failed to fire in the second quarter as the Kangaroos slammed on six unanswered goals.

By the first change, the Kangaroos led by 20 points and from then were never in danger as they surged to a 73-point win.

Humphries was dangerous all over the ground, while Jesse Bedggood and coach Adrian Cox were continual threats when they got their hands on the ball.