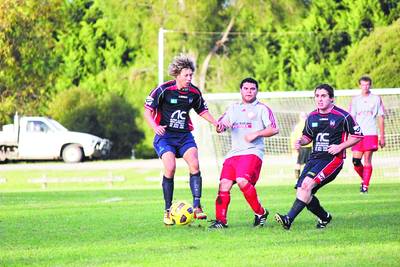 Monash performed a snatch and grab attack on Traralgon City on Sunday claiming a valuable 1-0 away win over the previously undefeated Roosters.

The early indications were of a scrappy affair, with Monash soaking up pressure and attacking on the counter.

Traralgon’s Mark Fairbrother began to work his way into the game and was twice denied, with the game remaining scoreless until half time.

Early in the second half, the Wolves took the lead when Eric Sostak claimed his fourth of the season after the keeper failed to hold Cummings’ initial shot, and the veteran curled the ball home.

City began to push hard and the Monash defence that was missing regulars Trent Felici and Ethan Lawrence, with keeper Mark Heatherington dominating the aerial duels.

City’s John Kuol was looking dangerous down the right but was unable to find the end product as the home side floundered.

Dustin Moos had a great chance to level the contest, but flashed his chance wide of the upright in the dying minutes as Monash claimed the win 1-0.

Pre-season title fancy Traralgon Olympians have fallen further behind the ladder leaders with a 2-2 draw at home with the Falcons.

Falcons controlled the tempo of the match, but had to wait until the 30-minute mark before Nick D’Alessandro put the Morwell side in front with a neat finish from 15 yards out.

As expected, Olympians came out all guns blazing in the second half and equalized through former Falcons player Michael Fava, one of four ex-Falcons lining up for the Blues.

Falcons however, were undeterred and regained the lead.

With a glimpse of the future, junior players Isaac Abas and Gianni Salvatore linked up with the latter scoring his maiden senior goal with a quality finish.

A fairytale result for the Falcons was not to be, as a deep cross from Kenny Higgins managed to elude both defence and goal keeper for a 2-2 result.

Sale United came from one nil down to defeat Moe United 2-1 at Olympic Park on Sunday.

As the half continued, Moe started to create momentum and Adrian Savage opened the scoring with a tidy finish against the run of play.

In the second half Moe lost all momentum when Sale’s Tommy Nguyen skipped past three Moe defenders and keeper to tap into an empty net, levelling the scores at 1-1.

The continued Sale pressure led to another goal after a back post pass from Dave Myall found youngster Callum Clancy to finish off a well-rounded move 2-1.

Churchill continued its perfect start to the season with a 4-1 victory over Newborough Yallourn on Sunday to remain top of the ladder.

It was Newborough Yallourn that threatened to steal the show after a scrappy opening, when John Davey latched onto a ball to smash a volley past keeper Jason Sands from outside the box to take an unexpected lead 1-0.

This spurred the Rams into action, and they got their reward when Jesse Kennedy finished off some neat work from the left to level the score.

Shortly afterwards coach Luke Cheney curled an unstoppable free kick into the far corner to give the Rams a 2-1 half time lead going into the break.

The match was even until late in the second half when Cheney was fouled in the box, allowing Mark Bianconi to convert the resultant penalty for a 3-1 advantage.

Shortly before the final whistle, the scoring was completed when Nathan Osborne beat his man down the left, squaring for Cheney to knock in his second and the Rams to run out victors 4-1.

Fortuna overcame Tyers in another comprehensive display winning 6-2 on Sunday to remain undefeated.

Josh Tanti had a day out for the Orangemen, scoring a hat-trick of goals.

He was joined on the scorers list by Joel Pirotta, and George Fkiaris scored a brace for his new club.

The Lightning were unable to replicate the heroics of last week’s win over Moe, but again showed their scoring ability with coach Mark Pavich and in form striker Jake Budija both getting on the score board.

Traralgon Olympians travel to Burrage Reserve on Sunday to take on Newborough Yallourn and will be hoping to get its season back on track.

NYU has shown it is no push over in recent weeks, having made life very difficult for ladder leader Churchill and by pushing Fortuna to the brink.

Olympians are now under tremendous pressure to perform and Combine coach Steve Heywood will relish the opportunity to claim the points.

Falcons host Traralgon City in a battle brimming with youth, while Fortuna makes the trek to Sale in a potential danger game for the defending Champions.

In other matches the undefeated Monash face Moe in a derby and Churchill travels to Tyers.