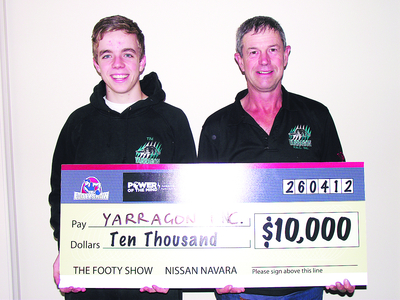 For Mid Gippsland football club Yarragon, the antics of Channel 9’s ‘Footy Show’ are not as silly as they seem.

Two weeks ago the club won $10,000 on the show’s new segment ‘power of the minds,’ where each week one of the five main hosts has to face a personal fear.

Club president Geoff Jolly said Brayshaw looked “quite petrified” when he went over the edge.

“He looked pretty scared; I don’t know if I could have done it,” Jolly said.

Yarragon’s involvement came courtesy of under 18 player Tim Matheson, who emailed the show after seeing a request for applications.

“In March this year the kitchen in our canteen burned down so that was Tim’s motivation for getting involved,” Jolly said.

On Anzac Day the producers of the show called Jolly and asked if the club would like to come on the show for the chance to win $10,000.

“I didn’t really have to think about it too hard,” he said.

By 8.15pm on the Thursday night, Jolly, injured senior captain Ben Dansky as well as Tim and his father, were on location at a building in Southbank.

“We hung around with Shane Crawford for most of the show and closer to the end they got Brayshaw into the kit and he was away.” Jolly said.

Jolly said aside from winning the money, it was interesting to see how live television was produced.

“We weren’t part of the audience as such because we were on location,” Jolly said.

“But we watched everything on a small monitor, there’s no rehearsing, no blackboards telling them what to say behind the camera or anything, they just wing it.”

Jolly said the money would go a long way towards covering the out of pocket expenses associated with the kitchen fire.

“It’s in the process of being rebuilt,” he said.

“Insurance covers most of it but there are always little extras with these things so the money will be put to good use.”

In terms of Yarragon’s season outlook, Jolly agreed his side had made a sluggish start to the season.

“We lost a few players but we also picked up some really strong ones.

“We lost an assistant coach just before the start of the season and our best and fairest winner is overseas and returning soon, so hopefully that will help us win a few.”