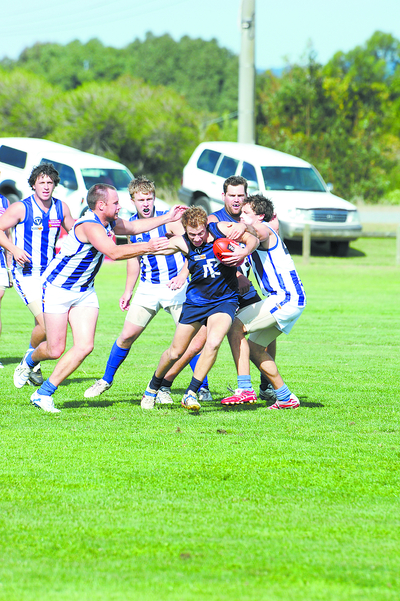 Although the Blues stumbled at the final line last Saturday to drop their first match of the season, Rosedale should put in a spirited performance against the reigning premiers.

In charge of what many say is the powerhouse club of the past two seasons, Bulldogs coach Nick Hider knows there is plenty of improvement to be made.

“Our depth in our list is a lot greater than last year; we had six of our best out on the weekend and we covered their omissions well with guys stepping up from the reserves and thirds,” Hider said.

“It’s going to be tough this week with three to four senior guys to come back into the side, with the way that the kids played on the weekend they don’t deserve to be dropped.”

With the side’s younger brigade of players stepping up in the early part of the season, Hider is fully aware of the challenge awaiting his side.

“Rosedale are the early favorites,” he said.

“It will be a test for the side against quality opposition and will be a gauge as to see how the kids match up and play against the bigger bodies.

“We have a plan that we are playing to and will continue to stick to it regardless of the result against Rosedale.

“There is the possibility in the second half of the season that we will change it up as we make a push for finals.”

North Gippsland rivals Gormandale and Glengarry will play for the Keith Lang – Bill Onley Cup on Mother’s Day at Gormandale.

The cup’s concept was devised two seasons ago after the clubs decided they would honour two individuals who had made extraordinary contributions to their clubs.

The cup replaced the Gippsland and Northern Cup, which the clubs contested for 25 years.

Last Mother’s Day was the first occasion in more than seven seasons the Magpies triumphed over the Tigers.

The rivalry between Glengarry and Gormandale stems across two decades the sides have contested seven senior grand finals.

Regardless of the ladder position of the two sides, the match is always fiercely contested.

Expect the Magpies to be in full flight as they mark club legend Trevor May’s 400th club match with victory.

Convincingly beaten in past weeks by last year’s grand finalists, Cowwarr needs to refocus with Saturday’s match against Woodside a further danger game for the eighth placed side.

Testing Sale City for more than a half of football, Woodside knows if it can continue its purple patch then a win is on the cards.

However coach Luke Anedda knows while opposition coaches have been gracious towards his side’s efforts in recent weeks, only the four points will be just reward for the Wildcats.

HEYFIELD will need to bring its best game to the table in its match against Traralgon Tyers United.

The Kangaroos will be confident their continued improvement in the opening four rounds will serve them well when they are pitted against the Bombers.

Relegated to goal kicking practice after an inaccurate and slow start in front of goals, the Bombers hit their straps following what had been a disappointing performance against the competition’s biggest improvers, Rosedale.

Taking it one week at a time while focusing on their game plan, which has been a blue print for early success, the baby bombers rose to the occasion and will need to be at their best to hold the Kangaroos at bay at their home ground.

Notching up its second win of the season, Boisdale/Briagolong is aiming to cause one of the upsets of the fixture when it faces Churchill.

Winning their past two matches the Cougars have hit their straps in past rounds and will be confident they can seal victory on the road.

The Bombers at their small home ground are an interesting prospect and should provide the Cougars with a challenge.

A pink football will replace the traditional red one on Pink Footy Day matches in North Gippsland football this weekend, as a show of support for women with breast cancer in rural and regional Victoria.