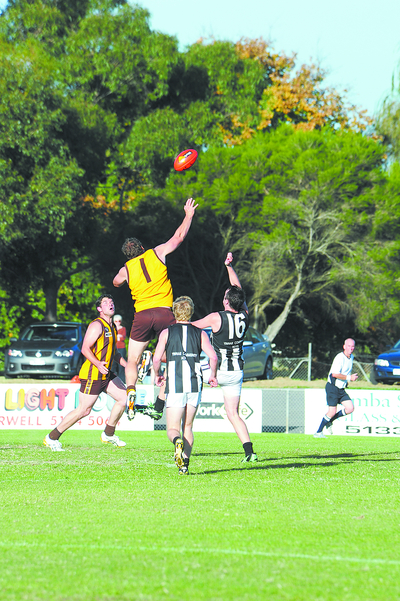 Morwell East faces Yarragon this weekend in Mid Gippsland football, and both are desperate for win.

Hawks coach Paul Henry said Morwell East is a shorter side and lacks a tall forward, so it cannot afford to kick long into the pack.

As a result, Henry said he had developed a game plan to counteract this.

However he said his side had not been ‘very disciplined’ in its execution of this game plan.

“If you bring in something that players aren’t used to, it can sometimes take a while to get it all gelling,” Henry said.

Henry said he was disappointed after the loss to Yallourn/Yallourn North and his side needed to put in more than a one or two quarter effort.

“We need to get back on the winners list and string a few together and that’s the plan with Yarragon this week,” Henry said.

Yarragon has about 10 players injured who would be permanent fixtures in their senior side and another six out who would be likely senior possibilities.

Panthers coach Shaun Kleeven said the injuries had given many junior players an opportunity to play senior football.

Although the Panthers were beaten last weekend, after quarter-time it was an even match.

Kleeven was happy with Yarragon’s attack in the contested possessions.

“The positive side of that is we never gave up; we fought it out until the last siren,” Kleeven said.

“You can’t use injuries as an excuse, but it makes it pretty hard when our forward line is basically made up of an under 18s forward line.”

Kleeven was hopeful full-forward Paul Harvey will play this weekend to take the pressure off the younger players.

“We’re heading in the right direction, we’re just a little bit undermanned at the moment,” he said.

Boolarra has slipped to the bottom of the ladder after a confidence-shaking loss to Newborough last week.

The Demons now face Yallourn/Yallourn North, which is travelling well after a win over Morwell East.

Boolarra coach Tony Giardina said he found positives in individual performances of players, but was struggling to find them in an overall team effort.

“I think we can (come back from the losses) it’s just we need to get a win on the board; at the moment the confidence is gone,” Giardina said.

He said the clash against the Bombers will be a big game for the Demons.

Yallourn/Yallourn North is aiming to keep its positive momentum going ahead of a testing run against Yinnar, Mirboo North, Newborough then Trafalgar.

Last week the Hillmen scored a 57-point win over Yarragon, which could have been more if not for their inaccurate kicking at goal.

Although Thorpdale’s half-forward line has improved with the presence of Brad Mackie, the team still lacks a prominent full-forward.

Yinnar takes on Newborough this weekend at the Magpies’ home.

Yinnar coach Sam McCulloch regarded Newborough as the team to beat and thinks it will be another tough game for the side, which has come up against Trafalgar and Mirboo North in previous weeks.

The Magpies suffered four injuries in their loss to Mirboo North last week, but they still should be in with a chance, as their performance without an interchange in the second half last week was impressive.

Trafalgar has won the last five matches against Mirboo North, and Tigers coach Troy Hamilton is keen to break that streak.

“I think they’ve been the measuring stick for the league for probably three years,” Hamilton said.

“So we want to beat them at their ground, but it’ll be hard to do.”

Trafalgar is unbeaten, but second on the ladder on percentage.

Trafalgar’s drive to be the best should produce an equally strong and determined performance from Mirboo North’s.

This round is Pink Football and Netball Day, in honour of Mother’s Day.

Money will be raised during the weekend for breast cancer and some teams will also be wearing pink socks.