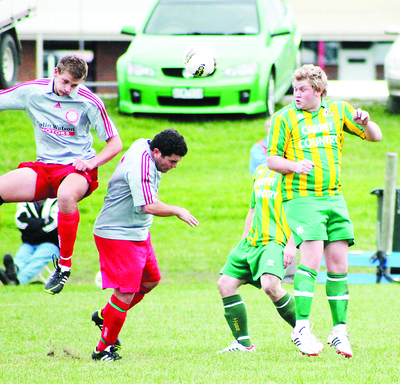 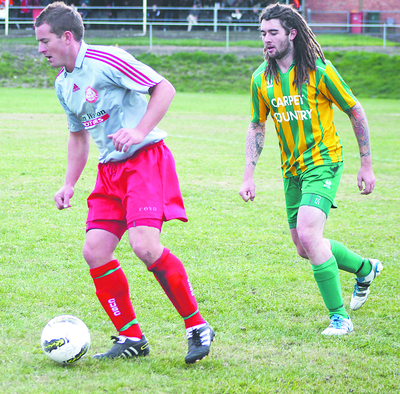 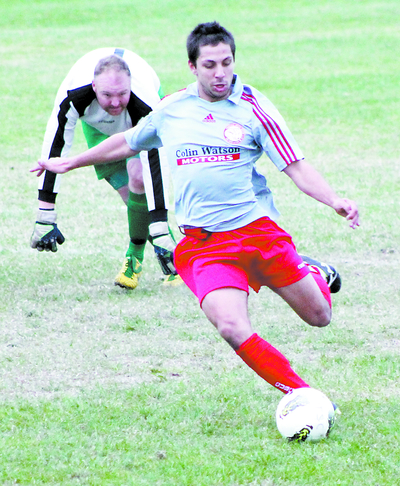 Sale United has dealt a massive blow to Fortuna’s championship title defence, with a 2-1 home win that also ended an eighteen year hoodoo against the Orangemen.

From the outset, the Swans possessed the ball confidently, dominating the engine room forcing Fortuna into an unfamiliar role of chasing.

A neat build up stretched the Fortuna defence, with the dynamic Tommy Nguyen in the perfect position to beat his marker and net the first goal of the game 1-0.

In the second half, Fortuna was on the attack and nearly scored within seconds of kick off.

Sale president stalwart Romi Bitar took the Swans to a 2-0 lead with a confident finish.

Fortuna was not about to lie down and was rewarded in the 75th minute with a classy strike from Owen Kelly to set up a grand stand finish to the match 2-1.

Fortuna pressed for the equaliser but Sale was resolute in defence and held on for a memorable victory.

Newborough-Yallourn United has claimed its first point of the season with a 0-0 home draw with the luckless Traralgon Olympians.

Genuine chances were scarce early, but as the game progressed Olympians looked dangerous while the home side went forward.

In the second half both sides missed golden opportunities within minutes of each other.

NYU’s Justin Mathison laid on some silver service with a pin-point cross that was not put home, then Olympians’ Michael Fava missed from two yards out with a wayward header.

The Combine almost had a late winner but Jayden Mathison’s spectacular over head kick went wide of the target as both sides shared the points 0-0.

The Red Devils were in front with just minutes on the clock after Jason Koppen, returning from a lay off, curled an edge off a box free kick, over the wall and in off the upright to make it 1-0.

Missing Eric Sostak, the Wolves looked toothless in the opening exchanges as Moe controlled the game from the back.

The visitors built in confidence and began to take control of the midfield with Mark McHallam providing plenty of supply for the forwards. In the second half Monash was presented with an opportunity to pull level from the penalty spot after Nick Dastey handled Daryn Cummings’ cross.

Ashley Birrell made no mistake dispatching the ball into the bottom corner. Soon after Moe regained the ascendancy when a McHallam corner was well met by Matthew Shearing at the front post as his header flew into the far corner of the net.

It was left to Birrell to step up against Moe stalwart Peter Albanese, and it was the diminutive midfielder who again finished with aplomb to give the hosts a share of the points 2-2.

In a game of two halves, the more experienced Traralgon City prevailed 5-2 over Falcons on Saturday night. Traralgon got off to the perfect start with a Dustin Moos shot from outside the box eluding the Falcons goalkeeper.

With several key players out of the line-up, Falcons continued to rely on youth and were rewarded with a goal from Sam Amaira to level the scores. Owen Newbury finished with an inch-perfect header to take the Falcons to a 2-1 lead at the break.

This miss seemed to be the turning point, as the young Falcons folded and City thumped home three in the space of twenty minutes to lead 4-2.

With Falcons chasing the game City was ruthless scoring again through Mark Fairbrother to run out victors 5-2.

Churchill has continued its winning way with a 5-1 victory over Tyers.

Tyers’ Shayne Pavich scored a consolation goal in a rare foray forward for the Lightning.

The undefeated Rams now sit a game and six goals clear on top of the GSL ladder.

Fortuna will be keen to get back on track when it faces Monash on Saturday night while top four aspirants Moe and Traralgon City face off on Sunday.

The Swans will need to be on their game if they are to repeat the dose with the Rams extra difficult to beat on their home patch.

NYU will look to build on its solid defensive form with a win over Falcons and nothing less than a win will be acceptable for the Olympians faithful when they host Tyers.