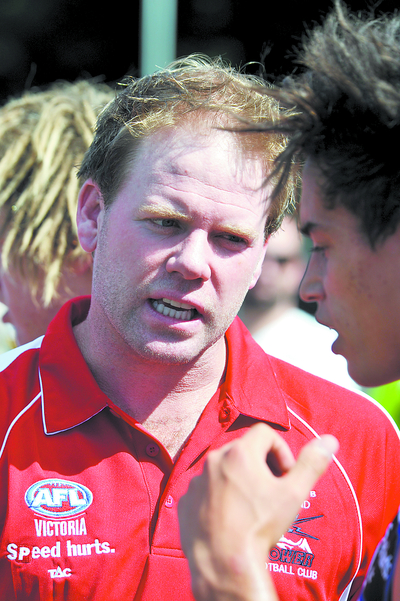 The Loy Yang B Gippsland Power have had an impeccable start to the 2012 TAC Cup season.

With five wins from five matches, coach Nick Stevens said the team’s performance is testament to a strong pre-season.

“It’s obviously very pleasing to be 5-0 at the start of the year, but I think it’s a result of the boys’ pre-season training,” Stevens said.

“They got themselves super fit and they just believe in the game plan and work really well as a team.

“Everyone is standing up and doing their role which is fantastic.”

Last weekend the Power defeated the Western Jets in “horrific” conditions, managing an outstanding 57 inside 50s compared to the Jets’ 33.

“The Jets put us under some really intense pressure and that combined with the weather meant we missed some easy shots at goal, but overall we’re not worried about our kicking,” Stevens said.

Captain Tim Membrey played his second match this season and according to Stevens, it was a true “captain’s game”.

“Tim’s come back into the side really well and on the weekend when the game was in the balance to be won, he really stood up and got the job done,” Stevens said.

While Membrey was overseas, Ryley Hall and Jack Johnstone shared the responsibilities of captaining the side and Stevens was impressed with how they performed.

“They both really enjoyed it and have been playing very well,” Stevens said. “They’re also two very strong leaders.”

The Power will play the Eastern Rangers at Morwell on Saturday, a match Stevens said the team must be ready for.

“The Rangers are one of the bottom sides, but in under 18 football you can be a bottom side and still be very competitive which they have been,” he said.

“They’ve been very close in some games and just haven’t been able to go the distance.

“We just have to turn up and be ready to play because if we don’t, we’ll lose.”

Saturday’s match will be played at the Morwell Football Ground, starting at 1pm.