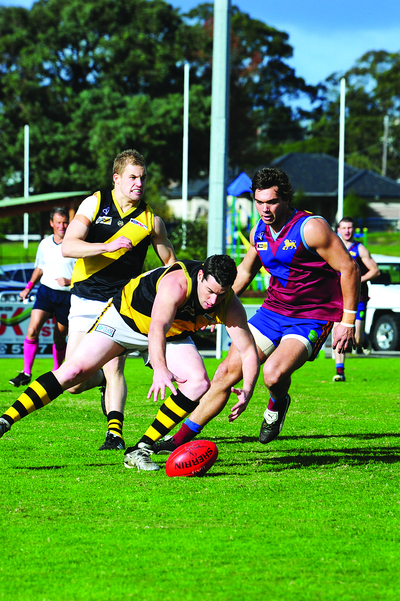 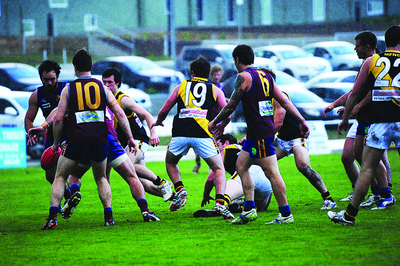 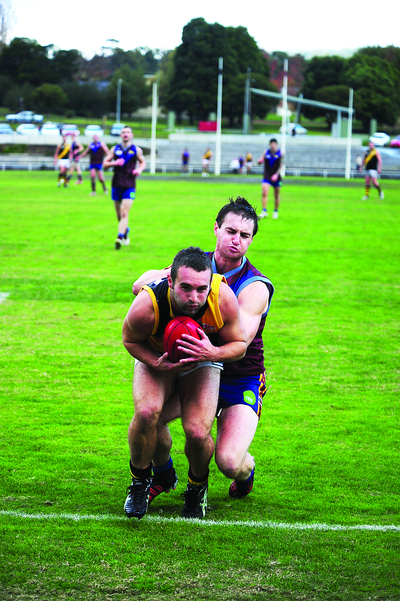 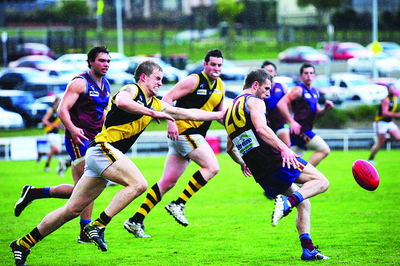 James Blaser was the target of close attention and players were sniping each other until a brawl broke out just before half time when Morwell’s Jack Brown was hit in the head.

Brown could not take the resulting free kick and was groggy going off the field when the siren sounded.

The only time Morwell was in front was when they kicked the first point of the day and drew level in the third quarter.

It was a jubilant win for former Morwell coach Jason McFarlane getting his first win as coach for Moe.

“It was a good win and I believe we played better most of the day,” McFarlane said.

McFarlane was also impressed by 16-year old Jack Casson in his debut.

Damien Kerr said he has run out of excuses for his team’s performance.

“When they got close they seemed to take the foot off the pedal,” Kerr said.

Aiden Vesty kicked the goal of the day when he booted Moe’s fourth.

From the behind post at an acute angle, a banana kick gave his team a 13-point buffer early in the second term.

In bitterly cold conditions, both sides played a good standard of football and Sale was clinical in its performance.

Traralgon suffered injuries to key forwards Dan McKenna and Sam Dunbar late in the first half and both players will be out of action for a couple of weeks.

Coach Josh Jennings said Traralgon will welcome the inter-league against Bendigo in a couple of weeks which will allow some players to recover from injuries.

Jennings said Sam McCulloch was a big loss, as he could always be relied upon to take the big marks at full back and in defence.

Sale’s better players were centre-half back Jordan Dessent, Corey Scholtes and Justin Mitrevski who kicked three as did Kane Fraser.

Leongatha continued its unbeaten run with a 60-point win over Warragul.

The Parrots were too strong at the clearances, with Colin Sanbrook and the Vernon brothers, Zac and Beau, dominating while Jake Best was busy up forward.

Matt Gray was good for the Gulls across half back.

Leongatha looked in total control until late in the second term when Mark Bradley and Gray took over in the ruck.

Warragul, trailing by 41 points, kicked four unanswered goals in five minutes to reduce the margin to 17 points by half-time but its momentum had slowed due to some heavy rain just before half time.

A 50-metre penalty to Ashley Blackwood in the first minute of the third term reduced the margin to 10 points and it looked like an upset was on the cards; however, several missed set shots allowed the Parrots to keep control.

Leongatha dominated the final term and with Dwayne Holt well held by Brendan Sheehan had too many avenues for goal.

The Power, with two six goal quarters, in the first half went into the half time break with a 43-point lead and were not under any real pressure in the second half.

Leigh Warnett continued his great form with another best on ground and coach Leigh McDonald kicked five while Travis Krause and Nathan Jones were good.

Maffra regained its form with a strong 55-point win over Bairnsdale on Saturday night.

The midfield of Winston Gieschen, Josh Stubbe and Kelvin Porter were winners and Ben Coleman was their best.

Leading at every change they did not allow the Redlegs a chance with Daniel Bedggood kicking six goals.