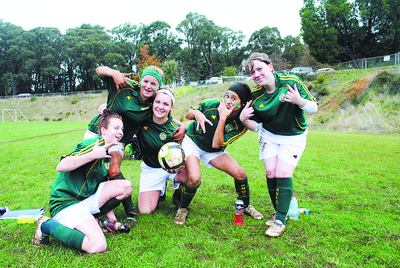 IF numbers and spirit are anything to go by, then soccer is thriving in Mirboo North according to club president Paul Vanderydt.

Since the club’s formation in 2009, membership has grown at a “healthy rate” to around 150.

“We have under sevens, nines, 11s, 13s, 16s, mens and womens in the South Gippsland League,” Vanderydt said.

“The level of enthusiasm over the last three years has increased so much, now we have quite a few families where mum, dad and the kids are all playing for the club.”

Vanderydt said when the initial expressions of interest were put out by the shire, it was “like a jumbo jet landing” with kids “getting off the couch” and really keen to play.

“We found some kids preferred soccer because it’s non contact, and they can also start younger (than Aussie rules),” he said.

Interestingly, Vanderydt said the club took an “ergonomic” approach to its operations, which encouraged people to share the workload.

“Being the president, it’s not like all the work is left to me,” he said.

“We limit the number of meetings we have by using the communication tool on Hotmail, and try and make sure no volunteer is putting in more than three hours per week.

“For example we have our AGM, presentation day and fun day all on the same day to reduce the time required for organising.”

Vanderydt attributed the sport’s positive reception in Mirboo North to the “European” culture of the town and the unique support they had received from the local Aussie rules club.

“We share the recreation reserve with the footy club and since the first ads went out in the paper, they thought it (having a soccer club) was a great idea,” Vanderydt said.

“Their thoughts were if kids aren’t playing footy, we’d really prefer them to be playing some sport rather than doing nothing.”

Such is the cooperative nature of the clubs’ relationship, they are currently in the process of putting together a joint master plan for government funding.

“Us and the six other users groups of the rec reserve want to put in an application to get funding for some lights at the rec reserve so we can use the second pitch for night training,” Vanderydt said.

“Having such a strong relationship with the footy club has really helped us a lot.

“It goes to show that if you get the town on side, you’re half way there before you start.”

The club’s success is certainly showing on the scoreboard, with the womens and under 16 teams currently on top of their ladders, while the mens and under 13 sides are in the middle of the field.

Vanderydt is confident the club will continue to grow with the “incredible” support it has had from the community and is looking forward to the future.