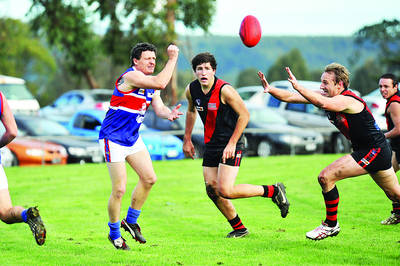 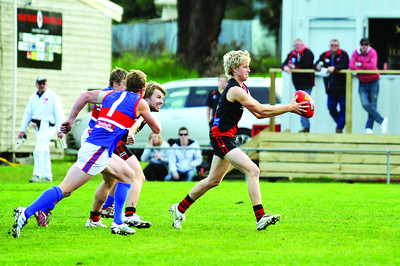 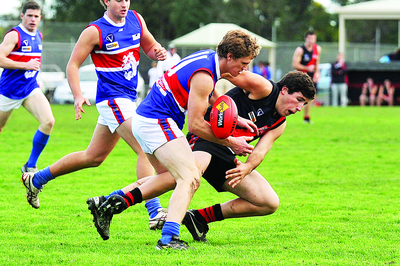 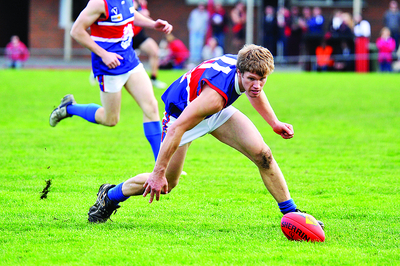 It was touted as the match of the round, last year’s reigning premiers Sale City against this season’s challengers Traralgon Tyers United in North Gippsland football.

Yet the contest failed to live up to expectations after quarter time, as the Dogs took control of the contest in the second half to run home 25-point victors.

Getting off on the front foot TTU’s Dylan Loprese slotted through the opening goal of the contest as the Bombers’ midfield led by the Graham brothers, Chris and Brian, stamped its authority early.

The Dogs’ inaccuracy in front of goal early gave the Bombers a small amount of breathing space before they registered their first through Trent McMillan.

McMillan then slotted though another major, with Jake Milham’s first shot for the day bending back to seal the Dogs’ third unanswered major.

A shot at goal after the quarter time siren by Loprese reeled the margin back to nine points at the change.

Play concentrated between the two half back lines and both sides worked hard to break through their opponent’s strong defensive backlines.

It was TTU’s Daniel Hawking that broke the shackles with a much-needed coach’s goal, but the Bombers struggled to contain goal scoring machine Jacob Schuback, who helped create a handy lead for the Dogs at the main change.

Struggling to compete with City at the stoppages, the Bombers went back to the drawing board late in the third term with Hawking moved to centre-half forward, but they could only manage to add one goal for the quarter.

Tempers boiled over late in the term with Bomber Greg Booth a casualty, as the umpires worked hard to diffuse a number of scuffles.

The Bombers outscored the visitors in the final term but it was not enough to change the result.

McMillan was best on field for the Dogs and Tom Wilson impressed, while Jake Sellen was a live wire.

For the Bombers, Brian Graham put in a strong performance and ruckman Luke Middleton continued his standout season, while Callum Laurie-Rhodes was a work horse in the backline.

Boisdale copped the full brunt of the sleeping Glengarry that rebounded from a tough three weeks to claim its fifth win.

Bursting out of the blocks, the Magpies slammed on eight majors to establish a 51-point buffer in the opening term.

Struggling to kick a winning score in recent weeks, the Magpies’ forwards were on-song early and continued to impose themselves in front of goals in a one-sided second half.

A one-goal to four opening half was the impetus for Chuchill’s win against Woodside.

The script continued in the second term and led by Dale Paterson and Alex Tatterson in front of goals, the Cougars booted a further six majors to take a 45-point lead into the break.

However it was Churchill’s eight-goal to two premiership term that killed the contest.

The Cougars’ midfield depth proved the difference, with Christopher Williams and Joey Whykes creating plenty of play while forward Brendan Holt also made an impact in the forward 50 metres.

Woodside’s Beau McGuinness and Josh Griffin were named among the best.

It was a one-sided contest at Gormandale Recreation Reserve with ladder leaders Rosedale making light work of the Tigers, 28.19 (187) to 3.3 (21).

The visitors started strongly opening the contest with seven majors before finding the going tough in a low scoring second term.

But it was not long before the Blues continued the barrage in front of goals, piling on 18 goals to one in the second half to cruise home 166-point victors.

The Blues’ boasted 12 individual goal scorers, with Jon Cantwell (seven), Dale Fleming (four) and Craig Mayman (three) among the pick of them.

Fleming was a standout in a best on ground performance, while Rosedale’s number one ruckman Cantwell was a solid contributor relishing his opportunities in front of goals.

Tiger defender Steve Hore was instrumental on the last line of defence as he worked hard to contain the Blues’ many avenues to goal, while team mate Steve Burgess finished the match with one major.

Heyfield’s seventh win of the season has moved Kangaroos into third position, as they extended their winning streak to five.

The home side established a handy five-goal buffer at the first change of ends.

The Kangaroos continued their dominance in the second quarter, with the match all but decided by the main change.

Jesse Leeds was one of 10 individual scorers for the Kangaroos finishing the match with three majors, while Nic and Brenton Dinsdale were standout performers.

For the Saints, captain Luke Cooper, Brett Street and Scott Anderson were among their best.