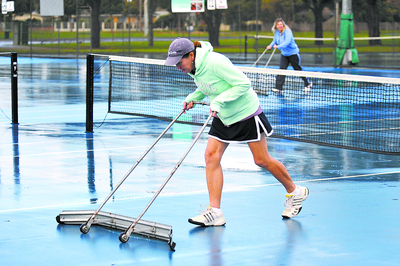 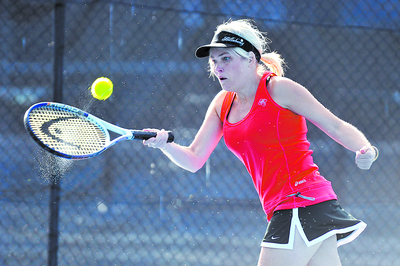 On a day marred by rain delay, New Balance has taken out the Traralgon Tennis Association’s Tuesday ladies pennant title.

The grand final was expected to be a close affair, but Trish Henry and Marlene Lamont of New Balance came out firing and set the tone for the rest of the day.

The duo overpowered Sharon Cummings and Lauren Stevens eight games to two, while Michale McDonald and Jeanette Kennedy took Lotto’s only win of the day in a tie breaker over Val Kennedy and Tanya Goodwin.

Despite the one-sided scoreline, the match was exciting to watch.

For Lotto, mathematically there was a small window of opportunity to take the match with the final two sets up for grabs but it was not to be.

Henry and Goodwin took out their match eight games to three, while Lamont and Val Kennedy also won their match with the same scoreline.

Player of the finals was awarded to Trish Henry, who also spoke on behalf of New Balance and thanked the opposition for the outstanding battles that took place during the season.

The consolation grand final was between Sfida and Yonnex, with Sfida winning by just four games.

Penny Erasmus for Yonnex held her three sets despite her team going down in a nail-biter.

This was a great match with all players performing well.

Sandra Butler was a stand-out for Sfida, with her finals experience holding her in good stead.

Presentations and celebrations followed the two matches with the players’ choice overall season trophy going to Robina May with a close win over Sallyanne Bahuth. Trish Henry took out the season player aggregate award by one point from Marlene Lamont.

“Overall it was a very even season, which is great because this is our second season of merging sections one and two into the one competition,” Murdoch said.

“Ladies tennis during the day is getting harder to play because more women are going back to work and people are playing at night, so we do our best to encourage as many people as we can.”

Murdoch said any women who were not “pure beginners” were welcome to join the competition, and emphasised the importance of the social and fitness sides of tennis.

A grading day will be held for all players on Tuesday, 17 July with the next season of competition starting the week after on 24 July.

Any players interested in joining the competition should register their interest with Wendy Moore on 5166 1509 by Tuesday, 17 July.