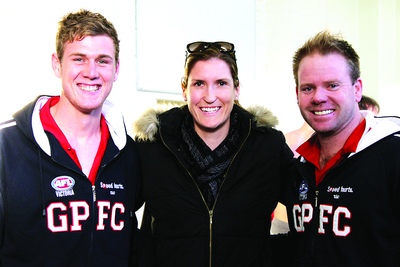 After the previous week’s thumping by the Murray Bushrangers, the Power boys responded mid week with what the coaching staff described “the best training session we have had all year”.

It was never going to be an easy task; the Dandenong Stingrays were coming off a big win and sitting sixth on the ladder.

The Power went into the game without its seven state representatives.

The Power’s depth was tested once again, but there was little to worry about with the return of Alex Carr, Adam Wallace and Shannen Lange, who came back from a stint with the Casey Scorpions.

Stevens implored his chargers to make the Stingrays accountable, and for each player to focus on beating their man.

The start was scrappy with few clear possessions, but ruckman Ben Vardy was valuable in the stoppages.

As Dandenong pushed forward, the Power’s backline was put under enormous pressure, but the Stingrays missed some wayward shots at goal which helped the Power.

Eventually the Stingrays broke through for the first goal of the game.

The Power were taking strong contested marks but kicked to the man on the mark three times in just a few minutes.

While the Stingrays delivered strongly into their forward 50 metres, the Power were turning the ball over with poor kicking, leaving their forwards begging.

A clever knock on by Tom Muir allowed Matt Northe to get clean possession and finally hit Simon Deery on the chest, which he promptly converted for the Power’s first. The Stingrays responded twice, negating the work of the Power defence.

However Josh Scott pushed forward and took a strong contested mark to open up the forward line, combining with Deery to convert for his second.

Matt Northe then goaled from a free kick, and better clearances from the centre gave the forwards a chance.

The Power went into the first break one point down.

Early in the second quarter, the Power were unable to convert in front of goal despite their opportunities.

A beautiful kick from Matt Northe broke the run of points, giving the Power the lead and opening the floodgates. Goals soon followed to Daniel Jackson and Deery, aided by some undisciplined play from the Stingrays.

Despite dominating play in the second quarter, the Power’s work was not showing on the scoreboard.

The Power’s defence, led by Brenton Hillard, stopped the Stingrays taking advantage of their missed shots at goal and wasted inside 50s.

Lachie Channing, Josh Scott and Alex Carr combined for an excellent goal, and it looked like the Power were ready to dominate but they disappointingly let the Stingrays get two easy goals.

The Power went into the main break 15 points up, and felt Stevens’ wrath as he expressed his anger over the last two Stingrays goals.

When the Stingrays kicked a quick goal in the third quarter the Power looked flat.

Then poor decision making led to a turn over and another goal to the Stingrays.

However the defenders were giving it everything, with James Huts and Aaron Heppell getting hands to what would have been certain goals and keeping Power in the game.

Shannen Lange broke the Power’s scoring rut with a snap, but the Stingrays were still moving the ball with ease. After a turnover resulted in another Stingray goal and Scott going down with an ankle injury before three-quarter time, the Power’s day looked to get worse as they went into the final break 10 points down.

During the break Stevens urged his players to take a risk and be bold, saying “if we get the structures right, we will win the game”.

The boys responded, with smothers, sheppards, and team work sparking the change.

Fortunately for the Power Scott returned to the field to take a classic pack mark and conversion.

The tackling pressure went up a notch with the Power laying huge tackles that shut down the Stingrays’ run.

Andrew Nelson hit Scott on the lead and he converted once again.

After some desperate play, Jackson kicked a beautiful pass to Scott who again pulled down a strong contested mark.

Scott kicked a huge goal from just on 50 metres that put the Power in front for the first time since the start of the third quarter.

With only minutes left on the clock, the Power led by four points and went about locking the ball down, denying the Stingrays the opportunity for a late goal.

The elation at the sound of the final siren was matched with exhaustion, the Power players totally spent from giving it everything they had in the last quarter. The Power now looks ahead to a home game against the Western Jets.