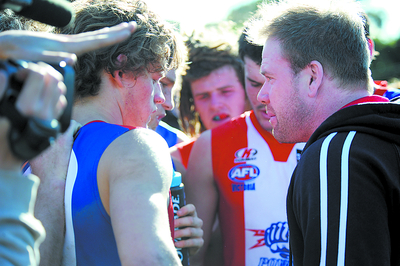 WITH just four matches left in the TAC Cup home and away season, Gippsland Power coach Nick Stevens is “very happy” with how the team is placed.

After 13 rounds, the Power are second on the ladder, equal on points with the Northern Rebels, but are behind on percentage.

“Before last week we had eight weeks of away games so I’m even more pleased with how we’re travelling,” Stevens said.

With seven Power players involved in the NAB AFL under 18 National Championships that ended two weeks ago, Stevens said last week was the first time the side had been at full strength “for a long time”.

“Some weeks we’ve had nine changes, which has been challenging,” he said.

“But because of that we’ve also played our whole list now which is great.”

In recent weeks the Power have been criticised for some slow starts which Stevens acknowledged, but did not see it as an issue going forward.

“We have definitely had some slow starts, but I think that’s mainly been because of all the changes we’ve had to the team,” he said.

Stevens is breaking the next four weeks down into two two-week blocks, with the “big picture being finals”.

In two weeks the Power host the Oakleigh Chargers, which Stevens expected would be a good challenge.

“Oakleigh will have all their private school students back (who are on football scholarships), so it will definitely be a test for us to see where we’re at against them at full strength,” he said.

Heading into the finals Stevens said the teams to look out for were North Ballarat, Sandringham, Calder Cannons and Dandenong, but emphasised the evenness of the competition.

With such depth in the side, Stevens said “it would be tough” picking the finals team. The Power will take on the Oakleigh Chargers on Saturday, 28 July at the Morwell Recreation Reserve. Kick off is at 1pm.