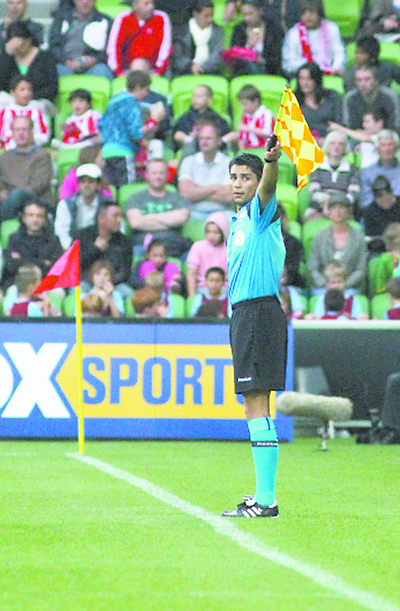 JAMES Nicolopoulos was inspired to became a soccer referee when he was 12 years old.

“I felt it would be a good opportunity to gain some leadership skills and give back to the community, as well as get some pocket money,” Nicolopoulos said.

He has also refereed in the Deaflympics in 2005, the Victorian Premier League final in 2010 and the qualifiers for the 2012 Paralympics.

“I chose to change paths and go over to refereeing because it’s a longer career so I’d get to stay in the game longer,” he said.

He said he enjoyed many things about refereeing, including the opportunities it presented and the pressure of officiating in front of “big crowds”.

During an A-League match between Melbourne Heart and Melbourne Victory last year, Nicolopoulos felt that pressure when he red carded Victory captain Kevin Muscat for a dangerous tackle on Adrian Zahra in front of 32,000 people.

“After it happened the response I got from Kevin was ‘James, I didn’t touch him’,” he said.

“I was confident in what I’d seen, and the decision was correct.

“But the whole thing was blown out of proportion and it went all over (video-sharing website) YouTube.”

Being required to operate under pressure even at the local level, Nicolopoulos said a good referee needed a mixture of skills.

“You need to be able to interpret the laws, allow common sense to prevail and have a great sense of humour,” he said.

“Every year you need to refresh from the law book; it’s taken me almost 15 years to master and I’m still learning.”

This year, Nicolopoulos has been instrumental in attracting young players to refereeing in Gippsland.

“At the start of the year the GSL used my profile to target young players and show them there are pathways to develop in refereeing,” he said.

“The clubs have been fantastic at letting the youth get out on the field and have a go.

“Currently we have 40 referees in the GSL and at least 95 per cent of them are youth referees that we’ve recruited this year.”

“It’s great for kids to gain confidence and leadership skills, because you’re taking on more of a managers role on the field,” he said.